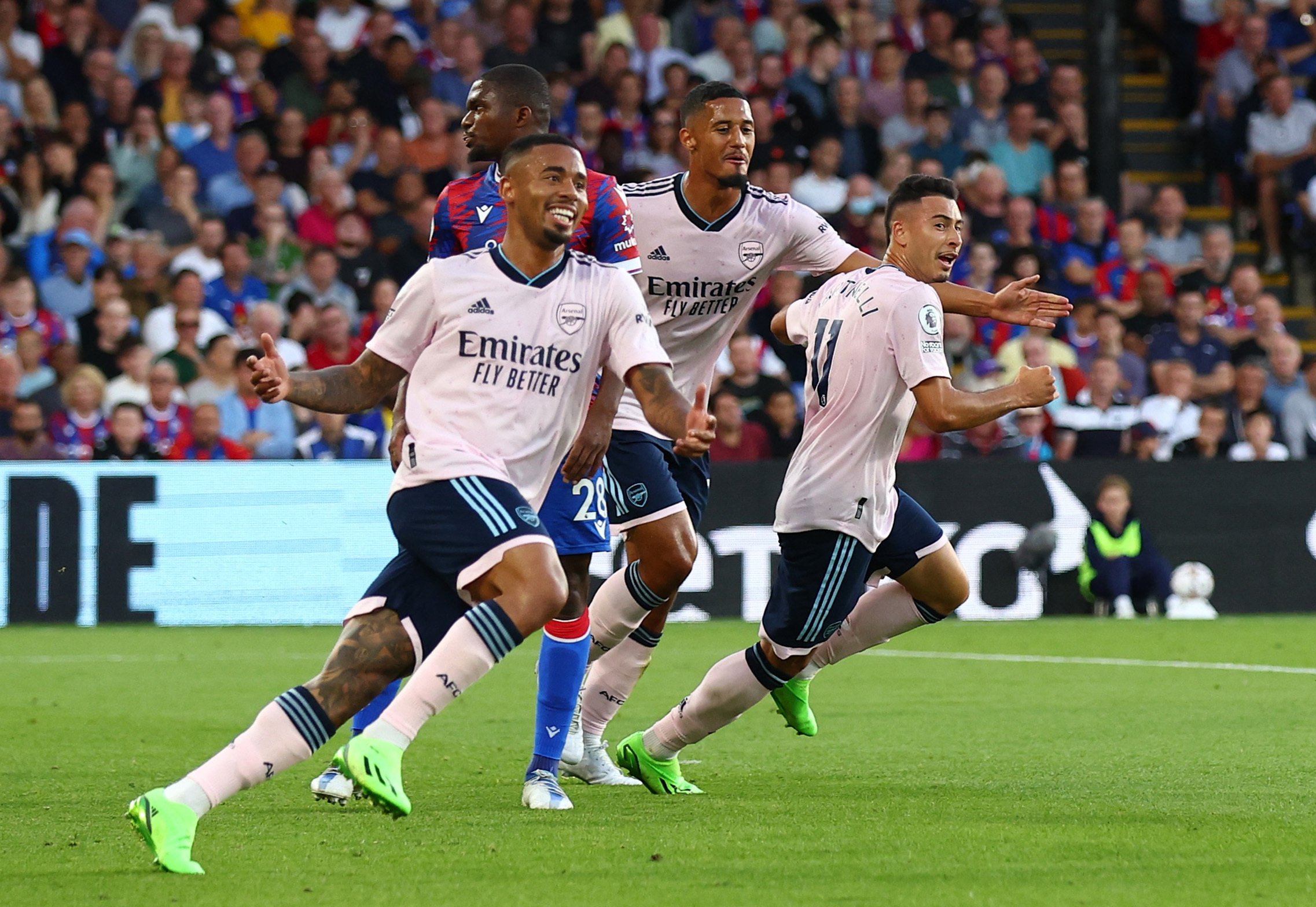 Arsenal kicked off the new Premier League season with a hard-fought victory at Crystal Palace in which Gabriel Jesus and William Saliba shone brightest.

After a strong start from Arsenal, Sky Sports had just flashed up the corner stats – positive reading for the Gunners and damning for Palace – when a perfect routine handed them the lead, with Oleksandr Zinchenko heading the deep cross back towards goal before Gabriel Martinelli nodded it in.

The goal actually sparked Palace into life, but Odsonne Edouard was denied twice before the break as Arsenal fought to preserve their lead.

Come the second half, Arsenal continued to live dangerously, but Aaron Ramsdale was on hand to keep Eberechi Eze’s effort out.

And if Arsenal are to challenge for the top four, here came the moments where they would need to stay strong. Three points compared to one could prove all the difference 37 games later, and ultimately it was job done and the points secured when Bukayo Saka forced Marc Guehi into an own goal.

A tale of two headers, and it left Arsenal fans singing “We are top of the league!” and serenading opposing boss Patrick Vieira in the final minutes – while they will be talking up Jesus and Saliba on the Tube journey home.

Jamie Carragher named Saliba his man of the match, and Arsenal boss Mikel Arteta declared “rightly so” when speaking to Sky Sports afterwards, adding: “I think he was superb tonight.”

Gary Neville said Saliba’s performance reminded him of a young Rio Ferdinand, while the player himself was just delighted to make his Premier League debut – three years and three loan spells after joining Arsenal.

“I’ve waited a long time for this moment and I’m happy to start my first game with a win and a clean sheet,” he said.

“It helped me to spend three years on loan in France because I’m young and I need to play. Now I’m back and I hope we can have a good season.”

Vicente Guaita – Could not get a strong enough hand to Martinelli’s header, but was hardly tested beyond that and could not stop Guehi’s own goal. 6/10

Nathaniel Clyne – A big ask facing Martinelli and struggled at times, picking up a yellow in the second half. 5/10

Joachim Andersen – An impressive range of passing allowed Palace to advance quickly, and almost got an assist when heading across goal for Edouard. 7/10

Marc Guehi – Busy night with Jesus for company, and was shrugged off easily by the Brazilian before Odegaard should have doubled Arsenal’s lead. Tough night made worse when he headed in Saka’s cross. 5/10

Tyrick Mitchell – Busy night between assisting Zaha down the left and keeping track of Saka. Barely put a foot wrong, and did enough to throw Saka off balance at a key moment in the second half. 6/10

Cheick Doucoure – A strong debut for Doucoure in midfield after joining from Lens three weeks ago. Looks a solid passer and could prove to be a valuable signing for Palace. 7/10

Jeffrey Schlupp – Quiet first half then saw an early attempt after the break deflect wide. 5/10

Eberechi Eze – Had Palace’s best chance in 52nd minute but denied by Ramsdale from 10 yards out, placing his effort too close to the goalkeeper. 6/10

Wilfried Zaha – Troubled White on plenty of occasions and threaded through a delightful ball for Eze’s big chance. 7/10

Odsonne Edouard – Couldn’t place his header beyond Ramsdale’s grasp and then saw an attempt blocked by Xhaka just before half-time. 6/10

Jean-Philippe Mateta – On for Edouard just before the hour-mark, and quickly saw a shot blocked behind for a corner. 6/10

Aaron Ramsdale – From incredible to questionable distribution within minutes during the first half, but made amends when saving Edouard’s header before half-time. 6/10

Ben White – Pushed out to right-back and was locked in the battle of the night with Zaha. Out of position when Eze should have equalised. 6/10

William Saliba – Back at Arsenal, in the starting XI, and already showing why Arteta felt now was the time to unleash Saliba in the Premier League. The proverbial “new signing” (he joined in 2019 before loan spells at Saint-Etienne, Nice and Marseille), Ligue 1’s young player of the year last season cut a composed figure at centre-back, and could quickly become their first-choice in this position. 8/10

Gabriel – Looked relatively solid next to Saliba, laying down a challenge to White if Arteta opts to stay with four at the back. 7/10

Oleksandr Zinchenko – Confident start at left-back on debut for Arsenal, and was completely unmarked when assisting Martinelli with a great header back across goal. 8/10

Thomas Partey – Quiet game compared to those around him. 6/10

Granit Xhaka – Booked for diving in the first half, but moments later made a vital block to deny Edouard. 6/10

Bukayo Saka – Kicked off the corner routine with a deep, pinpoint cross for Zinchenko, and later in the first half did his defensive duties when helping White to deny Zaha. Late on, he forced the error from Guehi to have a hand in Arsenal’s second. 7/10

Martin Odegaard – Arsenal’s new captain was relatively quiet in the opening half. Went close to doubling their lead after the break, and opted to pass instead of shoot when Jesus picked him out. The wrong decision. 6/10

Gabriel Martinelli – Right place at the right time for the opening goal of the Premier League season, having earlier missed a glorious chance inside four minutes. 7/10

Gabriel Jesus – “He’s now the main man… you feel like every time he gets the ball something is going to happen,” Sky Sports co-commentator Jamie Carragher said midway through the first half. Jesus was lively from the off, looked incredibly sharp for the first game of the Premier League season, and after just four minutes he almost danced his way through the Palace defence for the opening goal. In the second half, shouldered Guehi off the ball and would have bagged an assist had Odegaard taken his chance. 8/10

Eddie Nketiah – Replaced Jesus late on. May have to get used to that. n/a

Kieran Tierney – Came on for Zinchenko late on. n/a

Arteta: To win here, you need to suffer

Ten shots apiece, two on target for both sides, while Palace edged possession, but Arteta was pleased to grind out an opening-weekend win – and will focus on where improvements can be made come the next training session.

“The most important thing is to win the first match, to build confidence and momentum, and then you can talk about things we need to improve – there were quite a few today, to be honest,” he said.

“The way we started the game and played in the first half hour was superb – we should have scored more.

“We had to play the game in ways we didn’t want to as it went on because Palace are able to do that to you. To win here, you need to suffer – we’ve done it and that’s part of the mentality we want to build, to come to places like this and win.”