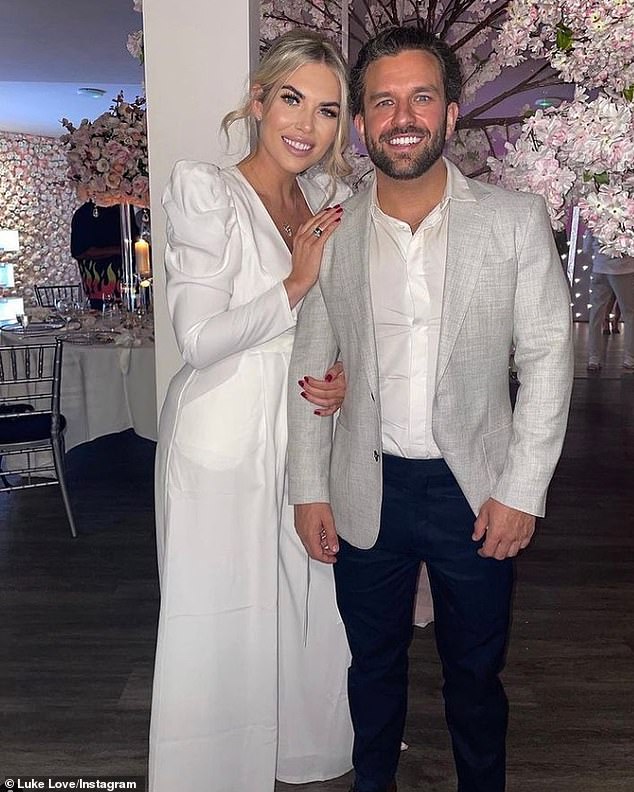 Frankie Essex has revealed she is pregnant with twins.

The former TOWIE star, 34, is set to welcome her first children with her boyfriend of three years, Luke Love, 31, and admitted she was ‘so shocked’ to hear that they were expecting two bundles of joy.

Although she admitted the pregnancy had been “overwhelming”, Frankie insisted she was “not nervous” and was busy renovating their new home.

Baby joy! Frankie Essex has revealed she is pregnant with twins. The former TOWIE star, 34, is set to welcome her first children with her boyfriend of three years, Luke Love (pictured January 8)

“I was so shocked!” Frankie said new! magazine. “The way we found out was really lovely. The lady scanning me was focusing on a baby and then was like, ‘What else do we have here then?’ and I was so shocked and I asked, ‘Are we having twins?’ I burst into tears, tears of happiness. It was so beautiful. It was lovely.’

Frankie revealed that she got pregnant shortly after going off birth control, but didn’t have time to feel nervous as she was busy working on her new house with Luke.

She explained, “I’m not nervous. I’m focused on finishing the house right now as we’re moving in just when I found out I was pregnant,” she said.

“I love taking care of people, so I hope I’ll be a good mother!” It’s so overwhelming to be pregnant with all the emotions you go through. But with the house, I had a lot of things to focus on.

Frankie added that the couple originally didn’t want to know the gender of their baby but now plan to find out so there are no more “surprises”.

Super mum: Although she admitted the pregnancy had been ‘overwhelming’, Frankie insisted she was ‘not nervous’ and was busy renovating their home (pictured January 14)

Frankie, who is Joey Essex’s older sister, has kept details of her romance mostly under wraps since coming out with her romance in 2019.

Speaking to Closer magazine after going public with their romance, the blonde beauty coyly revealed: “Yes, I’m in a relationship. We’ve been seeing each other for a few months, and I’m really happy.

“He treats me well and is very, very, supportive in every way, we are great together.”

Frankie left TOWIE in 2014 and recently made headlines with her candid discussions of her body dysmorphia.

The reality star has battled publicly with her fluctuating weight and previously told TSWT she used a ‘skinny mirror’ to try and ‘cheat herself’ so her weight wouldn’t impact her Mental Health.

Last month, Frankie reflected on the two-stone weight loss she achieved in 2021 in throwback snaps uploaded to her Instagram.

The star looked groomed and toned in photos taken after her impressive body transformation as she posed in gray Calvin Klein underwear.

Frankie has previously said her initial weight gain was because she was “fed up” with the lockdown, but by controlling her portion sizes and changing her routine she was able to lose weight.

Cute couple: Frankie, who is the older sister of Joey Essex, has kept details of her romance mostly under wraps since posting with her romance in 2019

Looking back on her transformation, Frankie said it was one of her biggest accomplishments of the year and she was keen to maintain her good routine for 2022.

She wrote alongside the image, “I’m back!” Who remembers my transformation last year with @mfgoalgettersuk.

‘It was definitely one of my biggest accomplishments of 2021 and it’s safe to say that since then I’ve stuck to adopting better eating habits and maintaining my fitness as much as possible.

“But as we know it’s easy to fall back into old habits and indulge yourself, especially over the Christmas holidays… That’s why I’ve teamed up with @musclefooduk again this month for their Grab campaign Life By The GOALS.”

She continued, “For me, it’s not about losing weight or losing a dress size, it’s about feeling good to start the year off right. A little kick in the ass! In January, I set a goal to walk and swim at least twice a week, as well as get into a better routine with my food and fitness.

She signed off saying, “I’ll be keeping you all updated throughout the month so you can follow my journey and hopefully join me in starting the new year off right and catching life through GOALS!”

Candid: Frankie recently made headlines with her candid discussions of her body dysmorphia. Last month she reflected on the two stone weight loss she achieved in 2021