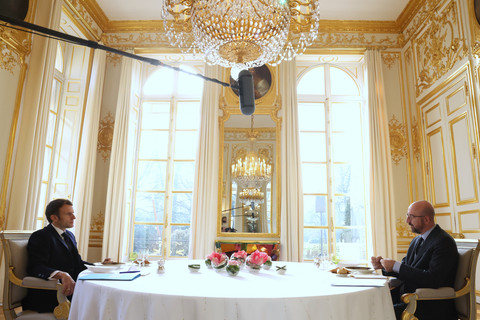 France has doubled down on its push for EU action against Islamist radicalisation, in a test of European appetite for French president Emmanuel Macron’s domestic agenda promoting strict secularism.

“Jihadist terrorism remains the most widespread and deadly phenomenon within the member states of the European Union,” the French EU presidency said in proposals on “Countering Radicalisation“, which were sent to EU states on 1 February and seen by EUobserver.

Officially, the measures were aimed at curbing all “extremist ideologies – whether of Islamist, far-left, or far-right inspiration”.

But France drew special attention to alleged Islamist threats, such as Middle East funding for European mosques and a recent social media campaign “affiliated to the Muslim Brotherhood,” a transnational Muslim group.

That social media campaign, relayed last year by the Council of Europe, promoted respect for women who wear the hijab but it was taken offline after a backlash from Paris.

And some of the French EU presidency’s language sounded like the declaration of a culture war.

Its memo warned of the dangers of “an insider culture” in some communities in Europe “that leads to rejection of the European way of life and values”.

And France portrayed the hijab campaign as an example of “ideological projects that are foreign to the fundamental values of the European Union”.

Officially, the French EU presidency has denied taking any special interest in Islam.

“Our approach targets all extremist ideologies which call for violence,” a French presidency spokesperson told EUobserver.

“We wish to raise awareness in the [EU] Council on the issues posed by certain individuals and entities who contribute to radicalisation” and “invite member states to take measures to hinder their activities, including financial activities”, the spokesperson added.

EU talks on the ideas are yet to start in earnest.

But the latest proposals come after France, last month, also circulated warnings on the “Independent jihadist threat” in Europe, which raised the alarm on the “extremely sensitive nature of the notion of blasphemy”.

The push comes against the background of French presidential elections in April, where Macron is trying to fight off two right-wing challengers.

For Olivier Roy, a French scholar of politics and Islam at the European University Institute in Florence, Italy, France’s rhetoric at the EU table was becoming increasingly larded with Macron’s secularist views.

“The ‘European way of life’ is here [in France’s radicalisation memo] identified with a strict secularism (laïcité) which gives as little room as possible for any religion,” Roy wrote in an email to EUobserver.

Macron was fighting what the French government has called wider “Islamist separatism” in France as part of his re-election bid.

But for Roy, the “main target of the ‘fight against separatism’ is not terrorism … but Islam first, and secondly any visible religious practice from any religion.”

Roy also called out the French EU presidency’s radical portrayal of the Muslim Brotherhood as a canard.

Themes such as European values and Muslim scarves have been major campaign issues for the far right in rallies ahead of the French elections.

“We don’t see many skirts anymore, but we see many niqabs,” Eric Zemmour, another French far-right presidential contender, claimed at a rally in Lille.

The French EU presidency’s rhetoric on the “European way of life” was described as “unhelpful” by Jessica White, a terrorism expert at Rusi, a London-based think-tank.

“European identity and associated fundamental values should not be based on religious affiliation,” she told this website.

“Attempts to retain an antiquated and closed sense of collective European identity can actually be more effective in driving radicalisation than countering it,” she added.

And France sounded behind the curve in its focus, said White. A greater danger could yet prove to be far-right radicalisation, she said.

“After two years of global crisis driven by political and social polarisation … the umbrella of ideological perspectives that falls under the far-right is actually more widespread in Western democracies, it has just not (at least not yet) produced the same level of violence,” she said.