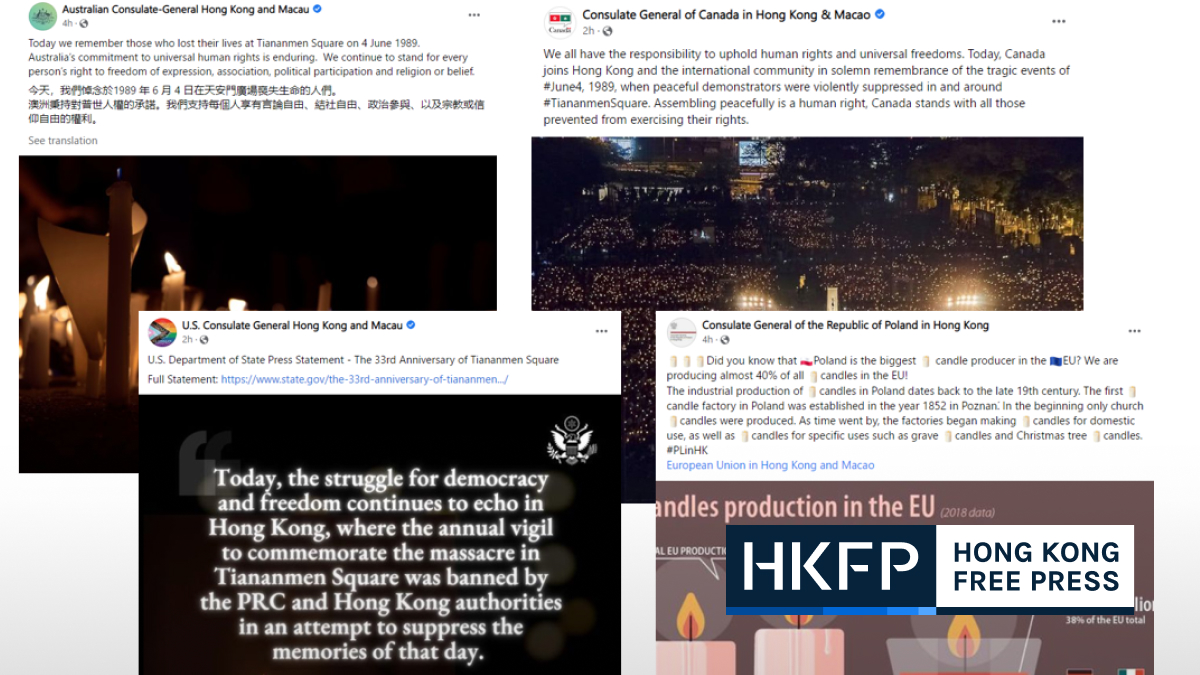 Foreign consulates in Hong Kong have ignored warnings from Beijing’s foreign office and and shared tributes to the Tiananmen dead on the 33rd anniversary of the crackdown.

This year, commemorative masses have been axed and police have warned Hongkongers not to gather, as Victoria Park – site of a traditional candlelit vigil – is closed. Since the onset of the security law in 2020, Tiananmen books have been pulled from shelves, monuments removed, activists arrested, and museum exhibits confiscated.

On Saturday, the US consulate changed its Facebook timeline image to a picture of the now-removed Pillar of Shame monument, and posted a statement from Secretary of State Antony Blinken.

“Today, the struggle for democracy and freedom continues to echo in Hong Kong, where the annual vigil to commemorate the massacre in Tiananmen Square was banned by the PRC [People’s Republic of China] and Hong Kong authorities in an attempt to suppress the memories of that day.”

Ming Pao reported on Saturday that the Office of the Commissioner of the Ministry of Foreign Affairs of China in Hong Kong had reminded the missions of Western countries not to express their views on the 1989 crackdown.

Sources told Ming Pao that the Office told them that past memorial activities in Hong Kong were illegal acts that were “hosted by a very small number of people who were anti-China and hostile towards the Chinese government.” It added that the crackdown was already history with no merit to be remembered.

Aside from the US, other foreign missions also defied the warning.

Canada’s consulate shared a historic picture of the vigil and a message reading: “We all have the responsibility to uphold human rights and universal freedoms. Today, Canada joins Hong Kong and the international community in solemn remembrance of the tragic events of #June4, 1989, when peaceful demonstrators were violently suppressed in and around #TiananmenSquare. Assembling peacefully is a human right, Canada stands with all those prevented from exercising their rights.”

The Australian consulate posted a Facebook message reading: “Today we remember those who lost their lives at Tiananmen Square on 4 June 1989. Australia’s commitment to universal human rights is enduring. We continue to stand for every person’s right to freedom of expression, association, political participation and religion or belief.”

Taiwan’s Ministry of Foreign Affairs also paid tribute to the Tiananmen dead: “We hope that no more will be the individual be sacrificed for the party, and that freedom, democracy and human rights can become our common language with them,” a Facebook post read.

Despite police warnings, small acts of defiance have nevertheless emerged in Hong Kong, with performance art in Causeway Bay attracting the attention of police on Friday, and Chinese University of Hong Kong security staff seeking to remove anonymous tributes from its campus.