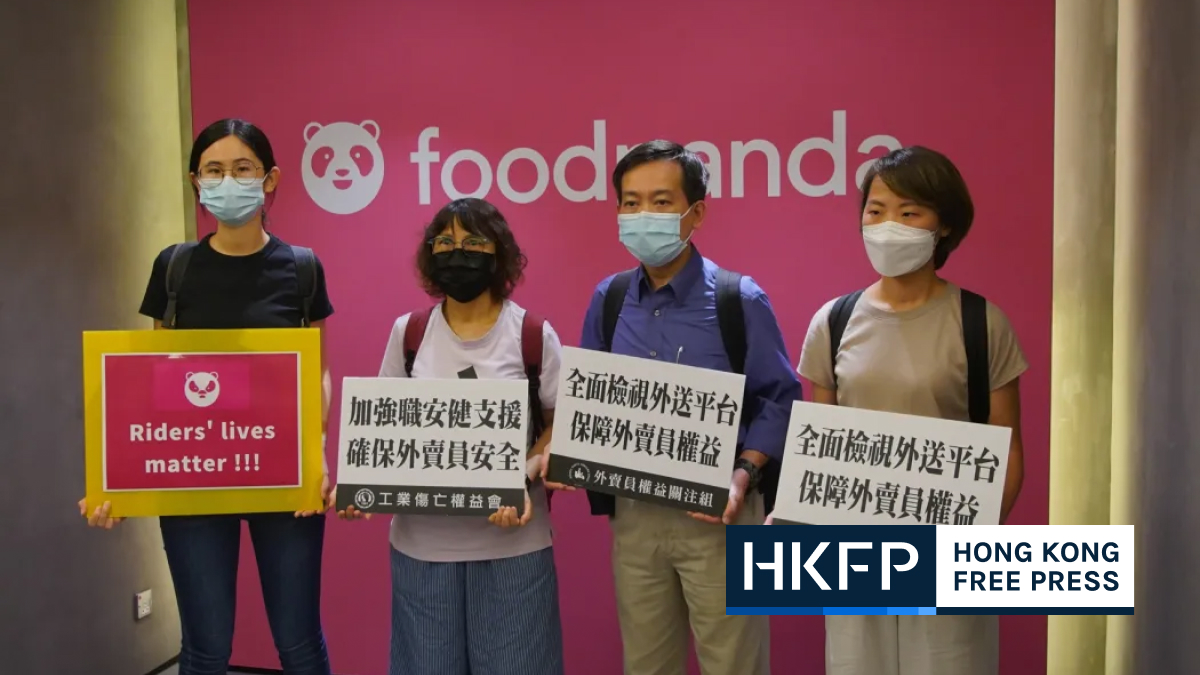 Hong Kong riders working for food delivery app Foodpanda have petitioned the company to extend its insurance coverage after one of them died in a crash while off-duty but on his way to work.

The family of the 59-year-old courier will receive no payment from the company’s insurance, which only covers accidents during active delivery.

The motorcyclist was involved in a crash with a bus at around 7:50 a.m. on Tuesday, local media reported. He was scheduled to begin working for Foodpanda at 10 a.m. that day.

The dead man’s sister, around a dozen Foodpanda delivery workers and Fay Siu, the chief executive of the Association for the Rights of Industrial Accident Victims (ARIAV), submitted the petition to Foodpanda’s offices in Causeway Bay on Thursday afternoon.

The sister told reporters that Foodpanda had offered the family only HK$10,000 as a consolation payment.

“We strive to run under the sun and in the rain just to make our ends meet,” the petition said. “But if anything happens, the insurance, with such a low benefit level, won’t be able to support us and our family.”

“Or maybe we won’t even be covered if it’s not during a delivery.”

When HKFP asked why riders should be protected by accident insurance before or after work, Siu Tong – a member of the Riders’ Rights Concern Group and a Foodpanda delivery worker – said their industry is different.

“Riders, cyclists, and walkers – we are always on the road,” he said, adding that their journey to work was more dangerous than for people taking public transport.

In addition, there were no clear boundaries between work time and free time. “We click a button to go online, and we click the button to go offline… what if you go offline, and the next second you got [into] an accident?” he asked.

Even during a shift, a worker will not be covered by Foodpanda’s insurance unless they have an order since the policy requires them to be on active delivery, he said.

“When we are waiting for orders, we are also working, right?”

Ahmad, a 35-year-old delivery worker, added that the insurance also does not cover toilet or meal breaks.

The accident insurance offered by Deliveroo, the biggest rival to Foodpanda in Hong Kong, kicks in when a delivery worker is online in the app and ceases an hour after the worker goes offline.

Riders who signed the petition demanded the company increase the payouts and broaden the coverage of its accident insurance, and said it should meet them to discuss safety, injury, and insurance issues.

The petition said previous wage cuts and the employment of more riders were all making the job less safe, because riders were having to drive faster and work longer hours.

Riders also asked Foodpanda to cover their parking expenses and liaise with the government to secure more parking spaces.

Ahmad said many plazas and housing estates do not provide parking slots for delivery workers, who lived in fear of getting a ticket which would cost 30 to 40 percent of their daily income.

After receiving the letters from the family and colleagues of the dead rider, Pedro Dias, the operations director at Foodpanda Hong Kong said they “acknowledge and understand the severity of the problem.”

“I also acknowledge that we need to put as much effort as we can into preventing and dealing with these issues. We will review the letters shared by the family and by the fleet with the utmost attention, and respond accordingly,” he said.

Foodpanda workers had launched a seven-day strike last November after cuts to delivery fees. Workers reached an agreement with the company on improving wages and working conditions after a total of 14 hours of negotiations,

They said Foodpanda was “lacking basic solicitude” as it only contacted the family of the dead man nine hours after the crash.

In addition, the two organisations said delivery platforms treated drivers as self-employed rather than employees.

The benefit level of the accident insurance offered by Foodpanda “is shockingly lower” than what the Employees’ Compensation Ordinances would require, they said.

Under Foodpanda’s insurance policy, the maximum claim for accidental death or permanent disablement is HK$360,000. The ordinances require compensation equal to 36 months’ earnings if an employee aged 56 or over dies from his injuries, with the sum capped at HK$1,281,600.

Foodpanda told HKFP on Thursday that it was deeply saddened by the incident and offered assistance to to the family, “providing additional funds and support for funeral arrangements.”

The firm added that it provides Group Accidental Personal insurance coverage for all couriers on par, or above, industry standards: “Although this accident did not occur during the courier’s shift, we are trying our best to check with the insurance company for all possible compensation options.”