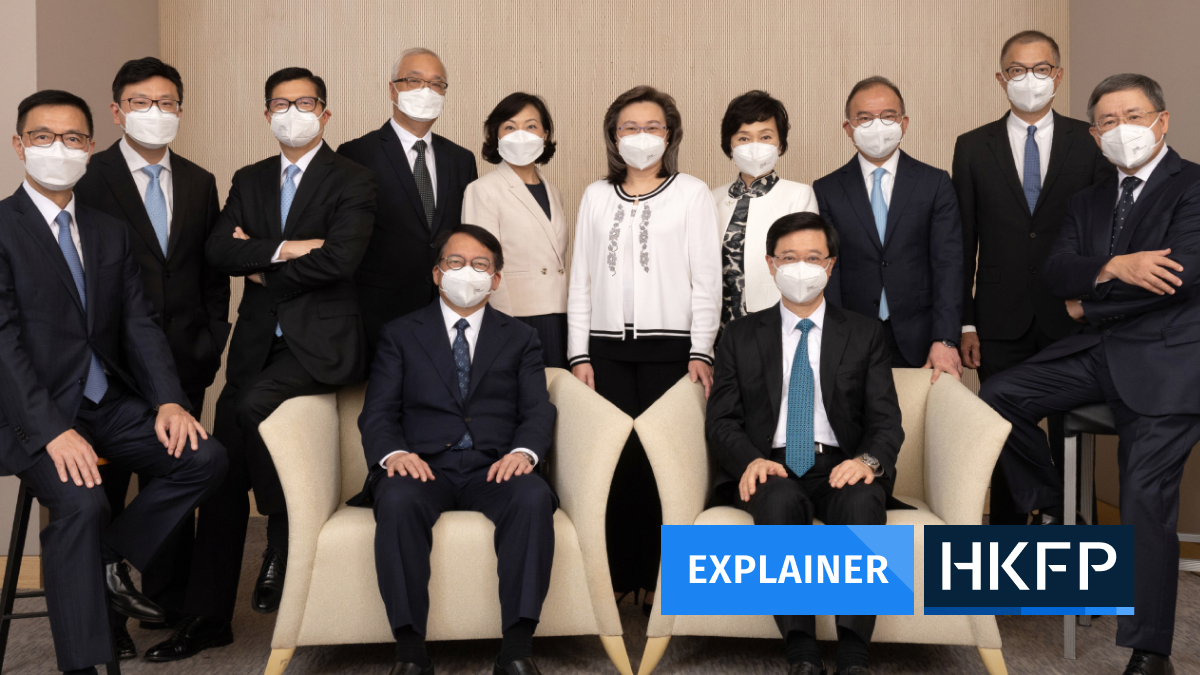 Incoming leader John Lee has unveiled his cabinet ahead of his July 1 inauguration. The ex-police officer appointed seven new top officials from outside the government, including four pro-Beijing lawmakers.

The security law head was picked as Lee’s no.2, whilst a “Covid zero” advocate was chosen as the health chief. Four officials are under US sanctions, whilst Lee’s cabinet also includes the highest proportion of women of any post-colonial administration.

HKFP examines who’s-who in the new government ahead of the July 1 swearing-in, which the government has barred several media outlets from covering.

Before becoming the director of the Chief Executive’s Office for incumbent leader Carrie Lam, Eric Chan had worked at the Immigration Department for the most of his career, which began in 1982. He was made the secretary-general of the Committee for Safeguarding National Security when the security law was enacted in 2020.

The 63-year-old was the immigration chief from 2011 to 2016. After the disappearance of Causeway Bay Bookstore operator Lee Bo in December 2015, Chan had said that – although Lee’s travel document was still at his Hong Kong home – he did not think that there was “sufficient evidence that [Lee] illegally crossed the border” into China.

Cheuk became an inspector of police in 1981 and switched to the administrative service three years later. He was the permanent secretary for innovation and technology, as well as the director of administration and development in the Department of Justice before his retirement in 2019.

The incumbent financial chief will remain on in his position. When Chan was the secretary for development between 2012 and 2017, he was alleged to be involved in the leasing of illegally subdivided flats, as well as a potential conflict of interest over a development project in the north-eastern New Territories.

Wong is the Secretary for Development in the current administration. He has previously been appointed as the director of marine, the director of Information Services and a deputy education chief.

Lam previously revealed to local media that he had participated in assemblies supporting the pro-democracy movements in China in 1989, but he declined to comment on the legal boundaries on Tiananmen crackdown commemorations when challenged on Sunday.

Lam has also been a member of Hong Kong’s police watchdog since 2019, which largely cleared the force of misconduct during the 2019 protests and unrest.

Cheung is currently a legislator and the vice chairperson of Hong Kong’s largest pro-Beijing party DAB. He previously served as a member of the Central and Western District Council from 2011 to 2019. He was also a member of the Hong Kong Housing Authority and the Long Term Housing Strategy Steering Committee.

Lo is currently hospital chief executive at the University of Hong Kong-Shenzhen Hospital and the director of the Liver Transplantation Centre at Hong Kong’s Queen Mary Hospital. He is a staunch supporter for China’s “zero-Covid” strategy and has openly called the 2014 pro-democracy Umbrella Movement as a “cancer.”

When reporters asked whether the next administration will push for city-wide Covid-19 testing, Lo said on Sunday that it involves a large amount of resources and will require cross-departmental research to determine when the best timing would be for Hong Kong to implement such measures.

Sun is an incumbent member of the Election Committee and Legislative Council. He grew up in Beijing and studied his doctorate degree in Hong Kong in 1994. He is now the chair professor at the Department of Biomedical Engineering of the City University of Hong Kong.

At a Legislative Council meeting on February 8, Sun said the city’s University Grants Committee was “leftover by the British during Hong Kong’s colonial era” and thus he advocated the removal of foreigners from key positions.

Linn is currently the permanent secretary for development (planning and lands) in Lam’s administration. She joined the administrative service in 1989 and has previously been appointed as the deputy secretary for financial services and the treasury, as well as private secretary to former chief executive Donald Tsang, and director of lands.

Mak is the incumbent vice president of pro-Beijing party, the Hong Kong Federation of Trade Unions. She has been a lawmaker since 2012 and is a member of the Council of The Chinese University of Hong Kong and chair of the Hong Kong Ladies Dynamic Association.

Choi is the incumbent under secretary for education. She was previously the vice-chair of the pro-Beijing teachers’ union, the Hong Kong Federation of Education Workers. She had an active role in pushing for national education in 2012. The government’s plan was eventually axed after thousands took to street to protest the proposed curriculum as “brainwashing.”

Designated head of the Transport and Logistics Bureau: Lam Sai-hung

Lam joined the government in 1986 and retired in 2021 from his job as the permanent secretary for development (works). He has acted as the director of civil engineering and development previously.

Designated head of the Environment and Ecology Bureau: Tse Chin-wan

Tse joined the former body of the Environmental Protection Department in 1985 and has been the under secretary for the environment since Carrie Lam took office.

During his term as the city’s education chief, he had expressed support for the deletion of the phrase “separation of powers” from teaching materials and successfully pushed through a revamp of Liberal Studies – a subject criticised by pro-Beijing voices as encouraging participation in recent social movements. On his watch, several teachers have been struck off for political reasons, whilst textbooks have begun to deny that Hong Kong was a British colony.

Yeung also worked at the Food and Health Bureau, the Home Affairs Bureau, the Kowloon City District Office and the Hong Kong Economic and Trade Office in Sydney.

Yau is currently serving as board director and chief executive officer of Greater Bay Airlines. Before that, he was the CEO of Cathay Dragon between 2015 and 2017 and was appointed as executive director of the board of Cathay Pacific – Hong Kong’ flagship airline.

Tsang was appointed as the secretary for constitutional and mainland affairs in 2020 and he will remain in his position during the next administration. He mainly worked at the Immigration Department before that and became the director of immigration in 2016.

He is currently on the US sanctions list together with Carrie Lam, John Lee and other Hong Kong officials for their advocacy of the national security law.

Designated secretary for financial services and the treasury: Christopher Hui

Hui joined the government as an administrative officer in 1999 and left for the banking sector in 2003. He became the executive director of the Financial Services Development Council in 2019 and was appointed to his current post in 2020.

Tang joined the police in 1987 and rose to the commissioner of police amid the 2019 anti-extradition protests and unrest. He was then promoted to become the secretary for security in 2021.

The security chief has been advocating for the legislation of Article 23 – Hong Kong’s own set of security laws and enacting laws to combat “fake news.” Tang is also sanctioned by the US government.

Aside from the appointment of 21 top officials, Beijing as well approved John Lee’s nominations for the leaders of disciplined services, the anti-graft watchdog and the Audit Commission on Sunday.

Woo Ying-ming, who retired earlier in March from his role as commissioner of correctional services, was appointed as the new head of Hong Kong’s Independent Commission Against Corruption.

Meanwhile, lawmaker Nelson Lam will become the new director of audit, whilst the incumbent Commissioner of Police Raymond Siu, Director of Immigration Au Ka-wing and Commissioner of Customs and Excise Louise Ho will remain in their positions.

In addition, Permanent Secretary for Security Carol Yip was appointed as the incoming director of the Chief Executive’s Office.