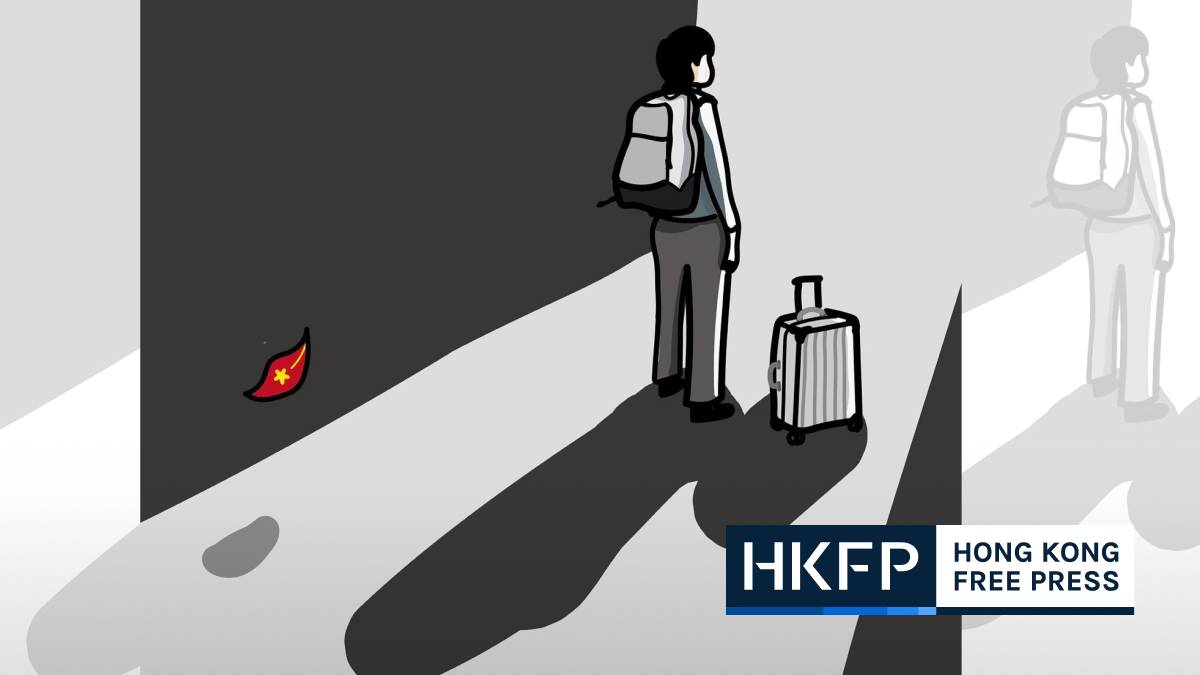 A former visual arts teacher who was struck off last April over posting pro-democracy political cartoons on social media has left Hong Kong. He cited pressure from the city’s Education Bureau and criticism from Beijing-backed media.

The pro-democracy cartoonist known as “vawongsir” announced his departure from Hong Kong on Saturday night, with a drawing of a man and a suitcase shared on his Facebook page and Instagram account.

Wong began by saying “sorry,” and said his relatives had asked why he had remained in the city after several cartoonists had left Hong Kong. While he “did not know where he stood on the list of being politically liquidated,” the ex-secondary school teacher said he felt pressure from the authorities and believed he could be detained in the future.

Wong told HKFP on Sunday that part of his concerns stemmed from the arrests made under the colonial-era sedition law, including five speech therapists who have been held in custody for more than 10 months pending trial over an alleged conspiracy to publish “seditious” children’s books about sheep.

The artist also mentioned the arrests linked to the now-defunct online news outlet Stand News, which saw two of its former editors being charged with conspiring to publish seditious publications.

“Although I have not been arrested, the coercion from the Education Bureau, the repeated named attacked by [Beijing-backed] media, and even my exhibition being suppressed… arresting me in the name of ‘inciting this and that’ seems to be expected,” Wong wrote in his post on Instagram, which has more than 68,000 followers.

The artist who had taught visual arts and liberal studies at a local secondary school began sharing political cartoons on social media in May 2019. Most of his work was critical of the Hong Kong government and Beijing. He later became widely known during the 2019 extradition bill protests, when he expressed sympathy for the protesters and accused the police of misconduct in his cartoons.

In January 2020, Wong received an anonymous complaint against the “inappropriate” cartoons he shared on social media. His school later refused to extend his contract in June that year citing “inadequate funds.”

Wong was officially deregistered in April last year, when the Education Bureau ruled that he had committed professional misconduct. According to local media, the education authorities described Wong’s allegations against the government and the police as “unreasonable,” including making claims that “the rule of law is dead” and alleging the Force had colluded with organised criminals.

His cartoons were also slammed by state-backed newspapers including Ta Kung Pao and Wen Wei Po, which said the drawings were “biased” and “frequently vilified” the government and the police.

In his post on Saturday, Wong said he had faced “10,000 internal struggles” but he “cowardly” decided to buy a flight ticket to leave Hong Kong. He departed alone, he said, without any family members seeing him off. In response to HKFP’s enquiries, the artist declined to disclose his current location but said he had plans to obtain a student visa and study a master’s degree there. He wrote in his post that he would continue to support Hongkongers from abroad.

“I pledge to myself that I would, with guilt, shame and anger, continue to draw for the people who were silenced,” Wong said, adding people could support him by pre-ordering a booklet which is set to be published in July.

Wong became the latest to join other Hong Kong artists who left the city under pressure from the authorities. Another pro-democracy cartoonist Ah To announced his decision to leave Hong Kong last month, pointing to “great mental stress” if he were to continue making political cartoons in the city.

Between mid-June in 2019 to the end of 2020, the Education Bureau received 269 complaints against teachers in connection with the months-long citywide unrest, according to figures released by the bureau in January this year.

The bureau said they had reviewed all cases except the ones that were still undergoing legal proceedings. As of the end of last year, the government has cancelled four teachers’ registration and issued reprimand letters, warning letters, advisory letters or verbal reminders to 176 teachers.