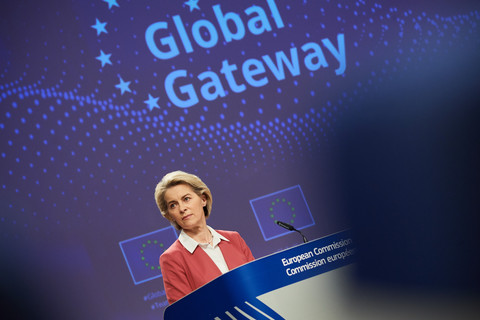 The EU Commission on Wednesday (1 December) unveiled its plan to invest €300bn by 2027 in global infrastructure in digital and climate projects – as an alternative to China’s Belt and Road initiative.

The proposal does not mention China directly, but it offers to counter the 2013 Chinese multibillion development programme – which critics say has pushed some countries to unsustainable level of indebtedness.

“We want to show a democratic, value-driven approach can deliver on the most pressing challenges,” she said in a response to propaganda from China and Russia, who argue that democratic countries are less efficient.

“They [our partners] know we are transparent, they know it is accompanied by good governance, they know there will be no unsustainable debt levels left over, they know it is with the country itself, inclusively, that we design the projects,” the commission chief said, when asked about the gap with China’s investments.

Von der Leyen said that the investment represents a strategic approach too, in the interests of the bloc.

“We are at the same level, but our modalities are different. We have been providing grants and China has been providing loans,” commissioner Jutta Urpilainen, in charge of development policy, said on Wednesday.

“If I look at the statistics, between 2013 and 2018 Europe has been the largest provider of development assistance in the world and our development assistance, which is purely grants, for 2013-2018, is very close to the reported Belt and Road initiative projects provided by China,” she added.

The commission said that by helping other countries, the EU would also promote its own interests and strengthen its supply chains.

The scheme, named “Global Gateway”, would be made up grants and loans, and aims to finance digital, transport, energy, health, and research projects.

It plans to focus on project such as fibre optic cables, clean transport corridors and clean power transmission lines to strengthen digital, transport and energy networks, according to the commission’s statement.

The commission said that the EU will invest in projects that “can be delivered with high standards, good governance, transparency, while ensuring financial sustainability at the same time”.

The commission is planning to leverage billions of euros, partly drawn from member states, financial institutions and the private sector.

Commission officials said the target of €300bn investment is an estimate. €18bn would come from grants from the EU budget.

Officials estimate that €145bn of investments could come from European and member state financial institutions, and the European Bank for Reconstruction and Development (EBRD).

The commission also plans to generate €135bn in investment by 2027, with guarantees from the European Fund for Sustainable Development Plus.

Last July national capitals agreed to sign off on a programme that counters China’s initiative including “high impact and visible projects”. Von der Leyen announced the plans first in September.

The EU is catching up to large, global investment projects in a geopolitical race for global influence.

China launched its scheme, which echoes the ancient Silk Road connecting Asia and Europe, to expand its global network. The US has also launched infrastructure programmes with Australia, India and Japan.

An initiative by the G7 countries – including Canada, France, Germany, Italy, Japan, the UK and the US – called “Build Back Better World” also aims to counter Chinese economic influence in low- and middle-income countries.

The Belt and Road initiative also has European beneficiaries: 18 EU countries are part of the initiative.