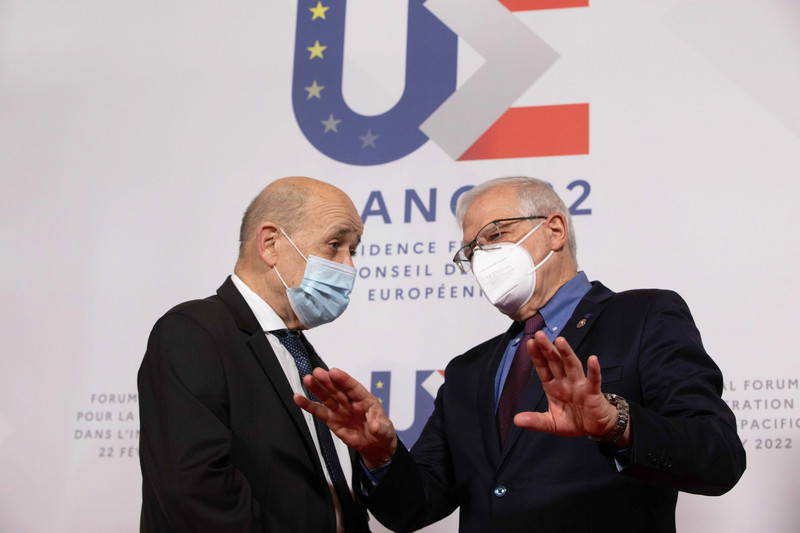 The EU on Tuesday (22 February) provisionally agreed a set of so-called mini-sanctions in reaction to Russian recognition of the breakaway Donetsk and Luhansk People’s Republics (DPR and LPR) in Ukraine.

Hungary, earlier in the day, had sent mixed messages over whether to move ahead with the measures.

The sanctions would cover asset-freezes and visa-bans against 27 individuals and entities linked to Russian recognition of the territories, as well as all 351 members of the Russian parliament who voted on Monday for recognition, said EU diplomatic sources, who spoke on the condition of anonymity as is customary in such cases.

Some of the individuals to be listed are Russian officials, but not Russian president Vladimir Putin himself or his foreign minister Sergei Lavrov.

Others to be blacklisted are Russian military commanders of a so-called peacekeeping operation (as it was labelled by Russia), which Moscow announced it was sending into Ukraine.

These sanctions were agreed by EU member state ambassadors in Brussels on Tuesday morning and were to be finalised by EU foreign ministers meeting informally in Paris later Tuesday. They could enter into force as early as Wednesday.

The sanctions qualify as mini, in the sense that they target individuals rather than the Russian economy.

“There was broad agreement around the table,” one EU diplomat told EUobserver.

Hungary, one of the most pro-Russian EU states, had placed a temporary reserve on its accord, pending consultation with its national government. But that hesitation appeared to have waned over the course of Tuesday.

Hungarian prime minister Viktor Orbán had spoken with Ukrainian president Volodomyr Zelensky, assuring him that Hungary “fully supports” Ukraine’s “territorial sovereignty and independence and will engage in any joint EU actions to mitigate the conflict,” according to a tweet from Orbán’s political director.

Even so, that initial hesitation “begs the question whether Orbán’s loyalty is to Moscow or his European allies,” a second EU diplomat said.

The Hungarian foreign ministry did not respond to questions.

The EU’s new blacklist aside, the European Commission has also prepared a new package of economic sanctions against Russia — but these are being held back for now as a deterrent against further Russian aggression.

Austria, Germany, and Italy, all of which have friendly Russia ties, stressed the importance of “incremental steps” Tuesday, diplomatic sources noted.

The provisional EU blacklist is more far-reaching than the US sanctions to date, which target DPR and LPR leaders rather than Russian officials and parliamentarians.

But for some, the level of Europe’s reaction was far from commensurate with Putin’s decision to redraw the map.

The three Baltic countries plus Poland — which are situated near the front lines of what could become a wider conflict over Ukraine — have been calling for a much tougher response.

“Putin will die laughing when he hears this,” a third EU diplomat, speaking anonymously, said.

“It’s clear that the ‘deterrent effect’ [of incrementally increasing EU sanctions] hasn’t worked so far, so when does the time come when we admit this?” a fourth diplomatic source asked.

András Rácz, associate fellow at the German Council on Foreign Relations in Berlin, said if the EU wanted to deter a full Russian invasion, then the time was now, not after large-scale fighting breaks out.

“The military logic will kick in after that, and sanctions will not be able to stop the military offensive. Now there is a chance to exert pressure,” Rácz told EUobserver.

Which line to overstep?

“It is not clear how far Putin’s troops need to push into Ukraine territory for the [new EU economic] sanctions to be triggered, and there are differences between capitals,” Steven Blockmans, director of research at the Brussels-based Centre for European Policy Studies, said.

“Any bombardment, shelling, across the contact line, into Ukraine territory will have to amount to the next stage of sanctions,” he said.

The reaction in Kyiv has seen Ukraine president Zelensky call for calm and consider severing diplomatic ties with Moscow.

“I’m in downtown Kyiv and everything is normal,” Kostiantyn Yelisieiev, Ukraine’s former ambassador to the EU, told EUobserver. “There’s spring sunshine. Cafes and restaurants are open and there are no long lines of people stocking up food,” he said.

“There’s only one exception – there are queues at shops selling guns and ammunition,” he said.

Even so, most Ukrainians seem to have been caught by surprise by the pace of events.

“We’ve had all these releases of US intelligence in recent days and yet nobody was ready for this decision taken by Putin,” said Yelisieiev, who now runs New Solutions centre, a think-tank in Kyiv.