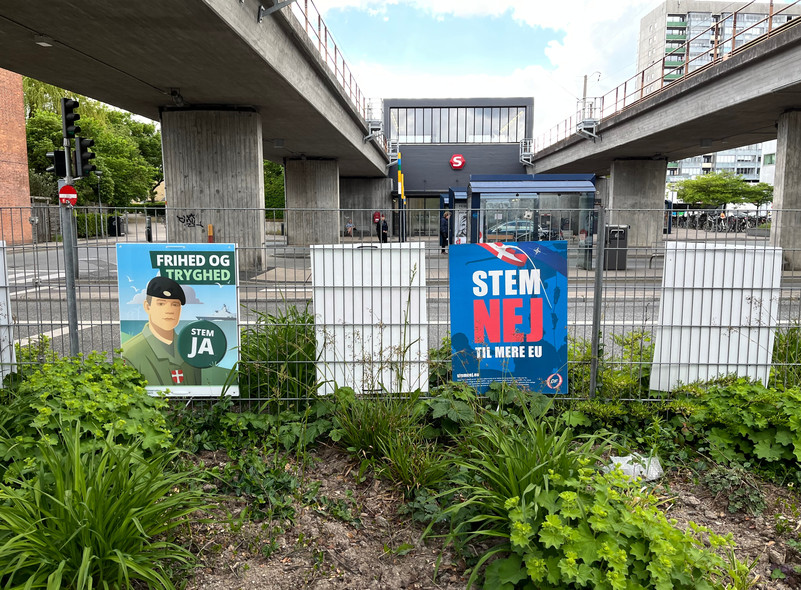 Should Denmark take part in EU defence cooperation? That’s the issue put to 4,262,439 Danes in a referendum on Wednesday (1 June).

It will be the ninth referendum in the Nordic country since it joined the EU in 1973.

Like the Brits, Danes were always split over European integration. Five previous referenda resulted in more EU integration, while on the other hand, the Maastricht treaty was rejected in 1992, the euro currency in 2000, and a majority said ‘no’ to EU police and justice cooperation in 2015.

Following the Russian invasion of Ukraine in February, Denmark’s social democrat prime minister, Mette Frederiksen, took a chance and announced a referendum on joining the EU defence policy — to be held on 1 June.

A broad alliance of 10 political parties spanning from centre-left to centre-right supports Frederiksen in recommending voters to nullify the Danish opt-out from EU defence policy, in place for the past 30 years.

The op-out prevents Denmark from participating in the Permanent Structured Cooperation (PESCO), which is part of the EU security and defence policy (CSDP). Only Denmark and Malta do not participate in PESCO.

On the eve of the referendum it appears likely that Frederiksen’s strategy will work: with 42-percent planning to vote ‘yes’, against 28-percent ‘no’, according to an Epinion poll for Danish national broadcaster, DR, out on Tuesday (31 May).

However, one-in-five, 19 percent, had not made up their mind — making the result far from predictable, and highly dependent upon turnout.

Advance voting has broken records in many local communities.

In Viborg municipality, election manager Flemming Jensen already received 4,165 postal votes. Compared to the last EU referendum in 2015, this was an increase of no less than 124 percent.

But the higher interest in postal voting could be linked to the introduction of a new Danish digital identification system forcing many citizens to pass the town hall anyway.

The EU flag is strangely absent in the campaigning, with both sides flagging the Danish flag prominently on posters and leaflets.

The only blue-yellow colours spotted in Denmark are those in support of Ukraine.

Few public debates were held prior to the referendum, and discussions have not been much about the future of Europe, but rather on how to best protect a small country in unruly times.

The ‘yes’-parties, spanning centre-left to the centre-right, argue that joining EU defence cooperation would give the country greater security. (Denmark is already part of Nato — in fact, a founding member).

“Denmark is the only country in the EU that has a defence reservation [opt out] …… We must stand with the democratic countries of Europe. Denmark is too small a country to stand alone”, prime minister Frederiksen said in an appeal for a ‘yes’ in the referendum.

On the ‘no’ front, rightwing parties argue that an EU army could weaken Nato cooperation over time.

“Danish territorial defence and our defence alliance in Nato must be strengthened. This is where we must put our efforts in the coming years. We must not sacrifice either tax money or human lives for participating in dubious EU military operations in Africa”, according to Pernille Vermund, chairman of The New Right party and Danish MP.

Her party is in favour of Denmark leaving the EU.

The leftist Red-Green Alliance is also campaigning for a ‘no’, and questioning the wisdom in plans to step up European military presence in Africa.

As reported by EUobserver the EU is aiming to launch three new military missions in West Africa, after Russia pushed Europe out of the Central African Republic (CAR) and Mali and threatens to do so in Burkina Faso.

“In Mali, the EU has trained an army that has shot and killed civilians and is now reportedly working with Putin’s mercenaries in the Wagner group.

In Libya, the EU has trained the Coast Guard in forcing boat refugees back to horrific prisons, to keep them out of Europe.

The mission in Mozambique is about protecting one of the world’s largest gas reserves. It would be a blow to the green transition if you extract that gas”, spokesperson for the Red-Green Alliance, Mai Villadsen, pointed out. More resources should better be spent on UN peace keeping missions, her party recommends.

Polling stations in Denmark close on Wednesday at 20:00, with exit polls expected to predict the outcome shortly after.