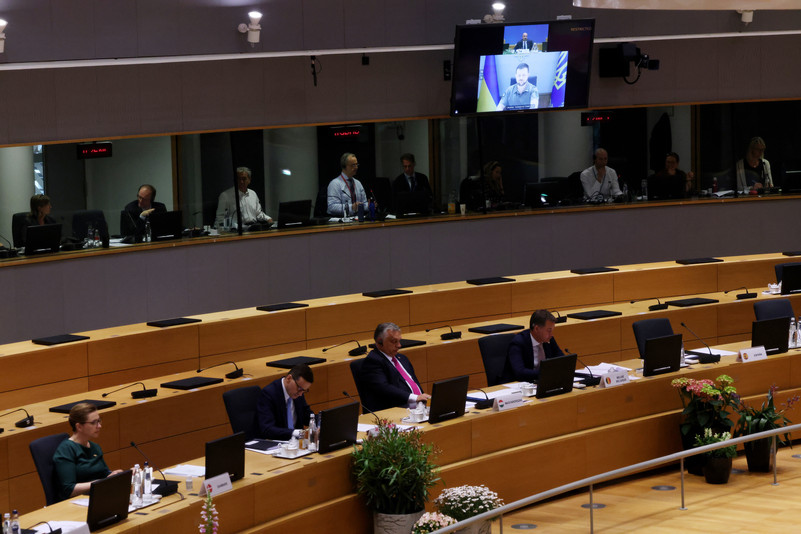 EU leaders agreed on a partial Russian oil embargo late on Monday (30 May) at the summit in Brussels, after weeks of negotiations and pushing back from the Hungarian government.

The agreement came after Ukrainian president Volodymyr Zelensky’s appeal to member states to approve the new set of sanctions against Russia — and remain a “united Europe”.

This will allow Hungary to keep Russian oil imports via the Druzhba pipeline — a key demand for Budapest which has been blocking the deal for weeks, citing energy supply concerns.

Hungarian prime minister Viktor Orbán called for extra guarantees ahead of the meeting with EU leaders. He said Budapest should be able to buy Russian oil from sea vessels if there is an “accident” at the Druzhba pipeline, which crosses Ukraine.

An embargo on seaborne oil deliveries covers two-thirds of oil imports from Russia —which will cut “a huge source of financing for its war machine,” European Council president Charles Michel said.

But Poland and Germany, which are also connected to the oil pipeline, have pledged to wind down Russian oil imports via Druzhba by the end of the year — extending the ban to cover 90 percent of all EU imports of Russian crude.

“Now we have the political agreement of how to phase out oil,” said EU commission president Ursula von der Leyen.

Nevertheless, a clear timeline to end the pipeline exception for Hungary and Slovakia has yet to be agreed upon.

After EU leaders have struggled to reach an agreement on Russian oil sanctions for weeks, the Ukrainian president urged EU leaders to show “strength” at the emergency summit in Brussels.

“All quarrels in Europe must end, internal disputes that only encourage Russia to put more and more pressure on you,” Zelensky told the leaders in a short address via video link, before an agreement on sanctions was reached.

The embargo on Russian oil, proposed by the commission four weeks ago, is seen as an important step to cut Moscow’s financing capacity — since revenues from oil and gas exports are Russia’s two main sources of income internationally.

“Why do you depend on Russia, on their pressure, not vice versa?,” Zelensky told EU leaders.

“Why can Russia still earn almost a billion euros a day by selling energy?,” he also said.

Overall, the EU has paid over €56bn to Russia for fossil fuel imports since the invasion of Ukraine in late February, according to the Centre for Research on Energy and Clean Air.

EU leaders agreed on a €9bn package of financial aid for Ukraine as part of efforts to provide immediate liquidity to Kyiv.

Von der Leyen said Ukraine needs around €5bn to maintain the country’s basic services, such as paying pensions and salaries.

In his address, the Ukrainian president said it is essential to move forward and speed up the process to grant Ukraine EU candidate status — after Kyiv completed the EU’s questionnaire on membership in mid-April.

“The European home was never complete without Ukraine… The very fact that Ukraine remained a fragment of Europe, somewhere outside your countries, contributed to the fact that Russia has developed an aggressive appetite to seize its neighbours,” Zelensky said.

Ukraine’s potential candidate status is expected to be discussed at the next EU summit in June.