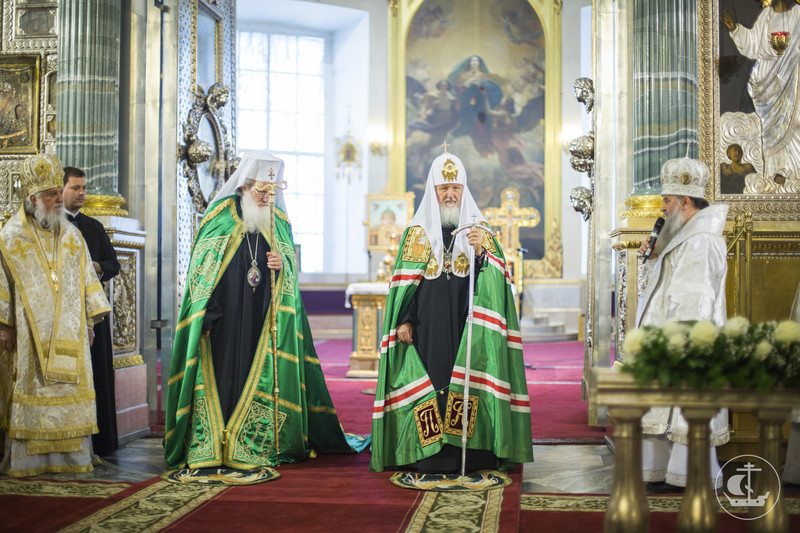 The EU is to blacklist Russia’s most senior cleric, Patriarch Kirill, as well as going after Kremlin oil revenue in its latest sanctions.

The 75-year old priest, Vladimir Gundayev from St Petersburg, in March sermons “blessed the Russian soldiers fighting for the Russian World and Holy Russia in Ukraine”, a draft EU sanctions note, seen by EUobserver on Wednesday (4 May), said.

He also called for “spiritual purification of Ukraine” and called Russian aggression “a religious cleansing operation” — in times when Russian forces have been accused of committing genocide by US president Joe Biden, among others.

And the Patriarch of Moscow and all Russia will now be listed among Russian rapists and torturers when EU foreign ministers agree the new measures next Monday.

The words “rape” and “torture” featured 46 times each in the new EU list of 58 mostly Russian military commanders to face upcoming visa bans and asset freezes.

One of them, Azatbek Omurbekov, was nicknamed the “Butcher of Bucha” due to his “direct responsibility in killings, rapes and torture in Bucha [a town in Ukraine]”, the draft EU note said.

Russian atrocities in Bucha and beyond are also to see a landmark EU ban on purchases of Russian crude oil and refined petroleum products, as the horror of what Patriarch Kirill has been blessing continue to come to light.

They will see the EU disconnect Sberbank, Russia’s top lender, as well as two other banks, the Credit Bank of Moscow and the Russian Agricultural Bank, from the Swift international payments grid.

They will see a ban on accountancy and PR services for Russian state entities, a ban on sales of EU-based real estate bought with Russian money, and on imports of Russian caviar.

And they will ban sales of industrial chemicals and list 17 more Russian firms, one of which made T-shirts with Russian president Vladimir Putin’s pro-war “Z” logo.

Oil money was used in a military spending spree by Putin’s ahead of his invasion of Ukraine in February, Swedish researchers have shown.

“What is being put on the table by the European Commission today about oil, that will really be felt in Russia, so we support that,” Danish prime minister Mette Frederiksen said Wednesday.

But the oil ban will be phased in over six months to a year and will exclude Hungary and Slovakia, due to historical EU energy dependency on Russia.

“Due to the specific geographic situation of Hungary and Slovakia, which are landlocked countries, and their substantial dependence from crude oil imported by pipeline from Russia, a derogation to the prohibition may be granted by their national competent authority,” the EU note said.

EU countries will also continue buying Russian gas for now and its main gas-payment vehicle, Gazprombank, are also not being targeted yet for the same reason.

That being said, the EU continued going after the relatives of Putin’s elite — with Elizaveta Peskova, Nikolay Peskov, and Tatiana Navka, the family of Kremlin spokesman Dmitry Peskov — also listed alongside Putin’s rapists and torturers.

Peskova, who once briefly served as a European Parliament intern for a far-right French MEP, is a social-media queen who “has been living a luxurious lifestyle thanks to her father’s connections,” the draft EU note said.

And one of those being listed next week, Marina Mordashova, showed how Russians used their relatives to create complex money trails.

She was the wife of a previously sanctioned Russian oligarch, Alexey Mordashov, who part owned the TUI tourist firm.

But “according to sources made available to the German Federal Financial Supervisory Authority (BaFin) and the German Federal Criminal Police Office (BKA), Alexey Mordashov has transferred his shares of the travel giant TUI and the gold company Nordgold together worth more than €1.5bn to his wife Marina Mordashova through various offshore companies,” the draft EU note said.

These included two firms in EU state Cyprus — Unifirm Limited and Rayglow Limited — as well as ones in UK protectorate and tax haven the British Virgin Islands.

The EU took pains to justify its ban on the three Russian media channels.

The sanctions included “a prohibition to advertise products or services in any content produced or broadcast by the Russian media outlets under the permanent control of the Russian leadership subject to the suspension of broadcasting licenses”.

Free speech was enshrined in the EU treaties, the draft EU note highlighted.

But Russia was waging “a systematic, international campaign of media manipulation and distortion of facts”, the EU said.

And Russia’s goal was “destabilisation of its neighbouring countries and of the Union and its member states”, it said.