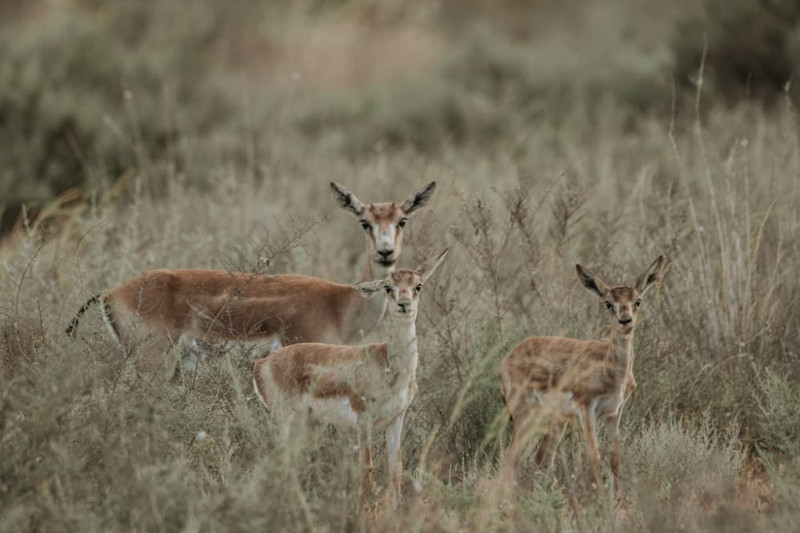 Name a country that is home to gazelles, flamingos and leopards? It probably isn’t your first thought, but one such place is Azerbaijan.

Better known for its oil, gas or perhaps Formula 1, this South Caucasus republic boasts a rich biodiversity — from high mountains to arid steppes, ancient forests to the Caspian Sea.

One of those responsible for protecting this environment is Mukhtar Babayev, Azerbaijan’s minister of ecology and natural resources.

He talks here about some of the environmental challenges facing his country.

What are Azerbaijan’s most successful ecological projects in recent years?

It’s hard to choose but I’ll go for our conservation and reintroduction work. One of our most successful projects concerns gazelles. In 2003 there were 4,000 goitered gazelles in Shirvan National Park, south of Baku, but now there are up to 7,000. Collaborating with two of our most important partners — IDEA and the WWF — 293 gazelles were reintroduced to former gazelle habitats in the west of Azerbaijan and even neighbouring Georgia. We are now monitoring those areas to see if the gazelles become established there. I should add that in the Soviet days, in 1961, an aerial survey found just 171 gazelles in Azerbaijan.

Why such a dramatic decline?

Hunting was a major cause. Then there’s loss of habitat to agricultural use and loss of corridors. Roads and urban development stop animals moving between ranges as they did in the past. These problems have badly affected the Caucasian leopard population too, but thanks to a National Action Plan, again implemented with our partners, the leopard population is now around 10 heads.

Alongside the gazelle and leopard, there are the brown bear, Imperial eagle and grey wolf.

Another species we are reintroducing is the bison. We brought 26 bison from Europe between 2019 and 2021. After a period of adaptation in an enclosure in the Caucasus foothills, the bison were released into the wild in the heart of Shahdag National Park. I’m happy to say they have already had six calves, increasing the herd to 31.

What aspect of your work are you most excited about?

That’s easy to answer. It’s the rehabilitation of Azerbaijan’s Karabakh and East Zangezur economic regions, liberated in 2020 after nearly 30 years of occupation.

First, the territory has to be cleared of land mines, which is painstaking and time-consuming work. But last month we were able to release tiny Brook Trout (Salmo trutta fario) into the Besitchay and Hakari rivers in Zangilan. We also planted chinar saplings in Besitchay State Nature Reserve in an attempt to replace the rare Oriental Plane trees felled during the occupation. These are small steps but symbolize our resolve to restore the biodiversity of this stunning region.

And we are passionate about the opportunities to mitigate the impact of climate change as we rehabilitate Karabakh. We’re rebuilding our settlements as “smart” cities and villages and creating a green energy zone within the framework of “Azerbaijan 2030: National Priorities for Socio-economic Development”. Electricity will be generated by solar, wind and small hydro power plants. Our target is to create a net zero emission zone in the liberated territories by 2050.

What keeps you awake at night, or perhaps I should say what worries you the most?

Another tough question — water shortages and water pollution are a major concern. Almost 70 percent of Azerbaijan’s freshwater resources are formed outside the country, so we’re facing growing challenges linked to transboundary water management and pollution.

I’ll give you an example: the Okhchu River is polluted with heavy metals and hazardous substances from copper and molybdenum mines in Armenia, operated by international companies. The Okhchu flows through liberated Zangilan into the second largest river in the South Caucasus, the Aras, and has a direct impact on its quality. I’ve called on the international community to help stop this pollution, but with no result as yet. When our displaced people finally return to their homes, it’s crucial that they live in a safe environment.

You mentioned net zero targets for Karabakh. What else is Azerbaijan doing to mitigate the impact of climate change?

We would like to set up a regional early warning system to identify climate-related events and risks. More effective exchange of information and coordinated action with our neighbours would strengthen our resilience to some of the effects of climate change. No country can cope with these challenges alone.

As a party to the UN Convention on Climate Change, Azerbaijan ratified the Paris Agreement and set an ambitious target to decrease the emissions of greenhouse gases by 35 percent by 2030. We have since adopted a new commitment to reduce emissions by 40 percent by 2050 as a voluntary commitment.

We’re also working towards sustainable development throughout the country. The Zaqatala State Nature Reserve in north-west Azerbaijan is to become the region’s first biosphere reserve. These reserves are a UNESCO initiative to reconcile the conservation of biodiversity with its sustainable use.

Is Azerbaijan party to other international conventions on the environment?

Absolutely. Azerbaijan has signed all the main international environmental conventions — there are around 20 of them — and we work closely with the various UN specialised environmental agencies responsible for their implementation.

I’ve already mentioned UNESCO and we’re hoping to gain World Natural Heritage status for some of our natural sites — the Hirkan National Park in south-east Azerbaijan, which includes a forest of ancient relict trees and leopard habitat, and for a very different area too — the mud volcanoes south-west of Baku.

The EU is another key international partner for us. The president of the EU Commission, and other top officials visited Baku this summer. A Memorandum of Understanding on Strategic Partnership in the field of energy has been signed and sets out commitments to reduce methane emissions throughout the entire gas supply chain. Energy efficiency, combating climate change and Azerbaijan’s involvement in EU Green Deal initiatives are all on the agenda. I’m optimistic about the potential for cooperation with the EU and other international organizations in building a more sustainable, greener economy in Azerbaijan.

I know World Natural Heritage status helps draw attention to an area. Are you looking to develop eco-tourism in Azerbaijan?

Yes, very much so. Our national parks and state reserves are ready to receive visitors, and we are working with other state agencies to develop more sustainable forms of tourism. I’d like to take this opportunity to encourage readers of the EUobserver to come to Azerbaijan and see our natural wonders for themselves.