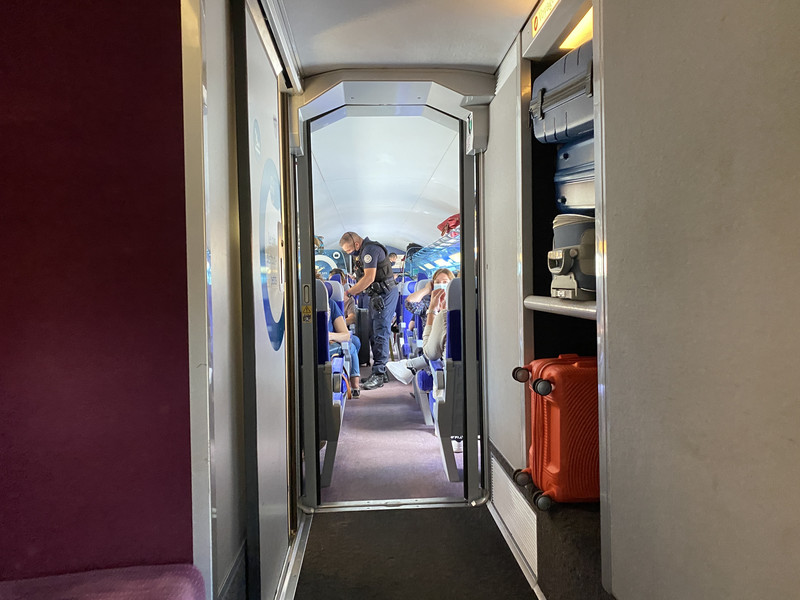 In April, the EU Court of Justice declared the persistent granting of such short-term controls illegal. The same countries are also trying to loosen the Schengen rules in the ongoing Brussels negotiations, internal documents show.

At what cost to EU citizens?

One day in 2019, a man was stopped in the small Austrian town of Spielfeld, while driving from Slovenia. He was asked by Austrian police to present his personal identity card or passport but he refused, because, he says, it was a border check and not a routine identity check. He was fined €36.

The man at the Spielfeld crossing challenged the fine. And eventually, on 26 April this year, the European Court of Justice ruled that Austria’s border controls breached EU law.

According to the court, countries in the passport-free Schengen area can put in place temporary border controls for six months at a time, but for every new decision the state has to make a new assessment and show that there is a new, serious threat to the country. This, said the judges, had not been the case in Austria. Therefore, the border controls were illegal.

Damaging to commuters and companies

The man who was fined at the Slovenian-Austrian border was Stefan Salomon, a researcher in EU law at the University of Amsterdam. He had wanted to test the legality of the border controls in place in a handful of countries since the refugee crisis in 2015.

“Anyone who is controlled at the border doesn’t have to show a passport. And if they are fined, they can contest the fines in court,” Salomon tells Investigate Europe. “The Court of Justice made it very clear that states cannot impose a fine for refusing to show a passport, if the border control is unlawful.”

“Second, you can hold the state accountable for any economic damage that you have because of unlawful border controls. You might miss an important appointment or lose a contract because you are stuck in controls. “

So, why don’t people sue? “Probably they are not aware that they could,” Salomon adds. “Or it’s difficult to prove the specific economic damage that they suffer.”

The point of internal border controls is mainly to limit migration and to send a signal to both migrants and to the population that the state is in control of the borders. The cost of the border controls are first and foremost carried by those who live in border areas and travellers.

Railway campaigner Jon Worth has criss-crossed Germany’s borders with Austria, the Czech Republic and Poland by train this summer. He found that border controls happen on main train lines and motorway crossings, but not on the smaller lines or road crossings.

“The controls make no sense,” he says. “They are not helping our security or stopping terrorists, as organised crime can find their way around them with minimal information. They are just a pain that creates delays for everyday people who need to cross those borders.”

A 2016 study commissioned by the European Parliament, tried to quantify the economic cost of reinstated internal border controls on local labour markets, tourism and the movement of goods and services.

A two-year halt of Schengen would cost the European economy €51bn, according to the research. And a Schengen-free Europe would mean a drop of 0.14 percent in EU GDP, or €230bn, every year.

There is also a political cost for the countries that ignore the recent EU court ruling: loss of credibility when defending the rule of law in Europe. In the EU, the governments in Hungary and Poland have for years challenged the fundamental principles of EU cooperation, especially ignoring EU court rulings on judicial independence.

“France, Germany and Austria have been among the most vocal in criticising undermining the rule of law by Poland and Hungary. Rightly so,” Salomon says.”Now they are not abiding by a key decision by the Grand Chamber of the Court of justice simply because they don’t like it.”

Due to large-scale migration, in 2015 the EU governments gave Sweden, Norway, Denmark, Germany and Austria a derogation from the Schengen rules for two years.

Since 2017, these countries, as well as France, extend their temporary border controls for six months at a time. And they cite more or less the same reasons for the controls — which the EU court in April ruled unlawful.

The Swedish government did so in May, just a week after the EU court ruling, extending controls until November 2022, citing terrorist threats and migration as reasons. The exact same wording has been used for every decision between 2018 and 2022. The Swedish justice minister Morgan Johansson declined to comment on the legality of these decisions.

Denmark too has controls at its border to Germany, due to migration, and at the border to Sweden, due to the threat of organised crime and terrorism. It too prolonged these controls in May for another six months. The Danish justice minister Mattias Tesfaye also declined to comment.

Germany has controls at the German-Austrian land border, for reasons of migration and security policy. “[…] in particular against the background of the fragile situation at the Turkish-Greek border, the illegal migration potential along the Balkan route and via the Central Mediterranean route as well as the considerable illegal secondary migration in the Schengen area,” the German interior ministry, which added that its control are compatible with the EU court ruling, told Investigate Europe via email.

The EU Commission lists the legal temporarily reintroduced border controls that national governments report. The present list says that Germany has controls on its land border to Austria.

Despite this, Worth, the EU trains advocate, says that at Frankfurt (Oder), between Berlin and Poland’s capital Warsaw, German police also conducted systematic checks of all train passengers entering Germany. “And this happens although there is no formal suspension of Schengen between Germany and Poland,” he adds.

Austria’s internal border controls are justified by the threat to public order and security due to organised crime (smuggling), latent terrorist threats and lately the Covid pandemic.

The Austrian Federal Ministry told us that the current situation regarding illegal migration is “well known” and “the suspension of border controls is a pull factor for smuggling as a form of organised crime.”

France has had internal border controls since December 2015 following a series of terror attacks which struck Paris and killed 130 people.

From 2017 onwards, France has cited “continuous terrorist threats” to justify its temporary border measures, according to its public filing with the European Commission. The latest six-month extension, which came days after the April EU court ruling and again cited terrorist threats, was strongly criticised by some NGOs, but the French Council of State, the country’s highest administrative court, deemed the move legal.

“The decision of the Council of State last July goes against the ruling of the CJEU of April 2022 and, consequently, the principle of the primacy of European law,” says Emilie Pesselier, from Anafé, a non-profit that supports foreign nationals at border crossings.

Frédérique Berrod, professor of European law at Science Po Strasbourg, says that while the Council of State is “certainly playing on the notion of a new threat”, the extension is permitted by the French court

She said: “The Council of State has ruled that border controls are proportionate to the fight against terrorism and these controls are renewed as the threat is renewed, [so] France cannot be considered to be in breach of Article 25 [of the Schengen Border Code].”

France’s interior ministry declined to comment further beyond the Council of State ruling.

Using the war in Ukraine as a pretext

Since the Russian invasion of Ukraine, several countries with internal border controls have now added the war as an additional argument. Either citing migration or potential weapons smuggling from the war as reasons.

Pretext or not, the Ukraine war argument can only be used for six months, according to EU law professor Daniel Thym from the University of Konstanz in Germany. “They could argue that the Ukraine war poses a new threat, so that the maximum period starts anew, but this option also ends after six months,” he says. „It is also not enough to stop border controls briefly and start again a few days later. That would be disloyal.”

So far, the European Commission has not taken any legal action against France, Germany, Austria, Denmark, Sweden or Norway, the six countries in breach of the Schengen rules. But in a June report the EU Court of Auditors admitted that the commission has not controlled these national policies enough.

A spokesperson from the Commission told Investigate Europe that they are in discussions with member states about the implications of the recent ruling and are reassessing recent notifications.

While no legal action has been forthcoming, in December last year the commission tried to solve the issue by proposing a reform of the Schengen rules.

The European Commission said in a January technical meeting at the EU Council that it had kept in mind “the needs expressed by some member states, in particular regarding secondary migration” when proposing the reform, according to a diplomatic cable from one national delegation in the room.

The commission had also “insisted on the proportional and last resort nature of these measures to reintroduce border controls”.

“The biggest problem with this proposal is that the commission, under pressure from certain member states, has given the sign that almost endless renewals [of internal border controls] are possible, while at the same time advocating better coordination, says French socialist MEP Sylvie Guillaume, who is in charge of the Schengen reform in the European Parliament.

“Essentially, they want to go back in time 25 years, before the Schengen legal framework was included into EU law,” says Stefan Salomon.

The compromise position of the council, adopted in June, allows member states to prolong internal border controls, but increases the obligations on them to assess all other possible measures. “The discussion highlighted the differences in ‘well-known positions’ between the Member States,” an internal note from a council working party meeting in March stated.

Europe’s east and south — the countries that make up Schengen’s external border — don’t want to be left alone with the burden of migration. And therefore want more conditions in place before a country can reintroduce internal border controls.

The Mediterranean countries Italy, Cyprus, Greece, Malta and Spain, the ‘Visegrad 4’ countries of Poland, Hungary, Czech Republic and Slovakia, as well as Luxembourg (a country with many cross-border commuters) had all called for “further strengthening of the conditions for the reintroduction of internal border controls”, according to notes from the council meeting.

Meanwhile, others, notably the Netherlands, Austria, Denmark, Sweden and Belgium “considered that the reinforcements already provided for in the commission’s proposal were a maximum,” according to the diplomatic notes.

The last word has not been said about the Schengen Borders Code. The European Parliament will also amend the proposal and negotiate with the council about the final text. This will likely happen next year. In a 2018 resolution, the parliament condemned the continued border checks and called for strict time limits.