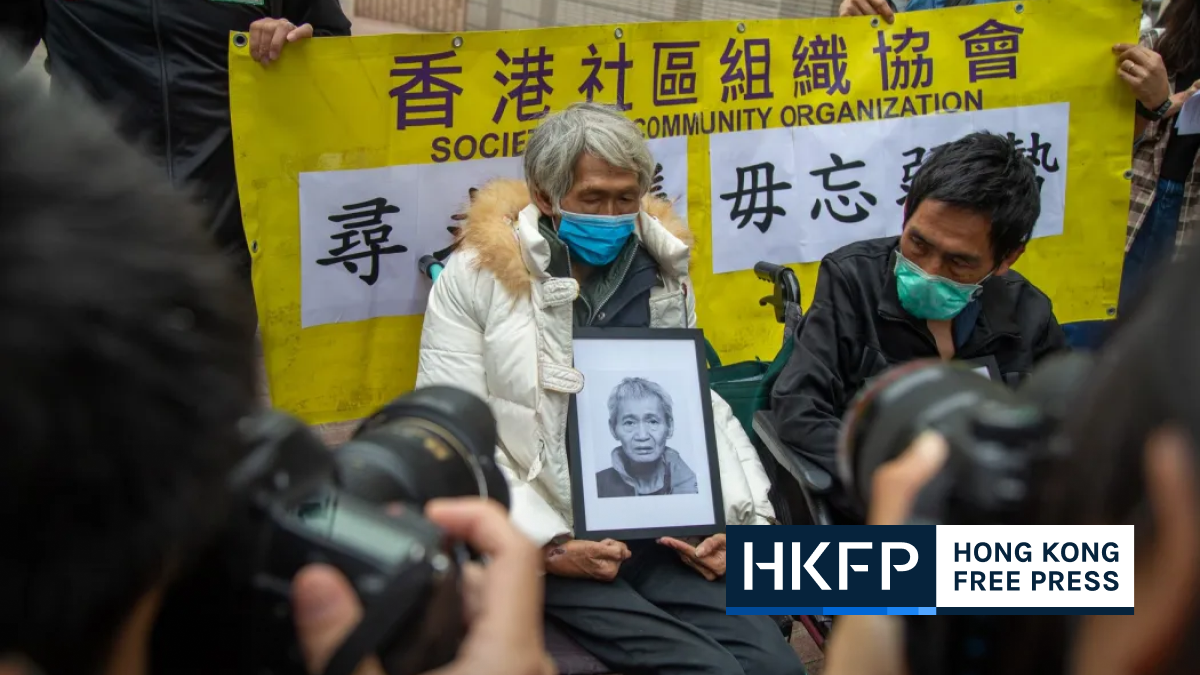 A group of street sleepers who sued the government for damages after riot police and cleaners tossed away their personal belongings in 2019 have won their case.

The Small Claims Tribunal ruled in favour of eight claimants on Tuesday, who complained that their bedding, clothing, a wheelchair and other items were thrown away as rubbish when police and staff from the Leisure and Cultural Services Department (LCSD) cleared the Tung Chau Street Park during an anti-crime operation on December 21, 2019.

It was the third time community organiser Ng Wai-tung of the Society for Community Organization (SoCO) filed claims against the government on behalf of homeless individuals. But Tuesday marked the first time such claims reached a verdict in the tribunal, as previous complaints were resolved through settlements.

The government argued in the tribunal hearing that the street sleepers “voluntarily gave up” their belongings, believing they had “got dirty” after LCSD staff threw them into bins.

Adjudicator Arthur Lam ruled on Tuesday such a claim was “not based on correct facts.”

He said that staff from the LCSD had tossed the items they removed from the park into 12 rubbish bins without sorting them. The street sleepers, many of whom were elderly or had disabilities, had to dig through the one-metre-deep bins to try and find their belongings.

“This may be too presumptuous,” Lam said.

The LCSD failed to meet the standard of reasonable care expected from an involuntary bailee when the personal belongings of the street sleepers were all mixed up in the rubbish bins, the adjudicator ruled. He added it would be very hard for homeless individuals who were not present at the scene to find their belongings later.

The government staff should have kept records of the items seized, as well as taken photos of them for documentation, Lam said.

Lam also rejected the government’s claim that the street sleepers had not clearly expressed their intention to retrieve the items after they were seized. The  adjudicator cited an email to the head of the LCSD from community organiser Ng one and a half days after the cleaning operation, which “unequivocally” showed the homeless people were seeking ways to recover their belongings.

Despite winning the claims, the street sleepers would only receive a nominal compensation of HK$100, after Lam ruled that they failed to provide sufficient proof to assert ownership of the items. The original compensation amounts sought by the claimants ranged from HK$2,000 to $13,290.

They had no photos or receipts of items, or other documents to show the value of the items they claimed were lost in the government operation. Some claimants were also said to have given “conflicting” testimonies during the tribunal hearing.

Lam said he could only accept that the street sleepers’ bedding was tossed away, and ordered the government to repay them HK$100 each.

Following the verdict, Ng of SoCO breathed a sigh of relief as the case – which had dragged on for almost two years – finally came to a close. He led two street sleepers to pay a silent tribute to a fellow claimant who succumbed to Covid-19 earlier this month. He was the second street sleeper involved in the case who passed before the verdict was handed down.

The NGO worker described the ruling as “delayed justice,” which showed the government had not issued a prior notice before its cleaning operation and had failed to exercise reasonable care.

“Although that HK$100 is only symbolic, it is still a manifestation of justice, showing that the government has no right to illegally or incautiously toss away the belongings of street sleepers as rubbish,” Ng said.

The community organiser went on to say that it was not easy for street sleepers to prove to the adjudicator that they owned the items. He questioned how a person could offer evidence to show what they possess at home.

“You have to imagine, the street sleepers were at their homes… even we wouldn’t take photos of our bedding items, or how many banknotes I have in my wallet,” he said, adding he would discuss the compensation amount with the claimants to see if they would lodge an appeal.

Chan Chi-wing, one of the claimants present at the verdict hearing, told reporters that the repayment amount “did not matter” as long as justice was served. But the nominal compensation of HK$100 was not enough for him to repurchase the items he lost, Chan said.

Asked how he felt about the passing of two street sleepers during the lengthy legal procedure, Chan said: “It was unfair to the two [street sleepers] who died.”

Last November, the Department of Justice had requested the tribunal to charge the claimants HK$26,879.21 to cover the court fees. But Lam decided on Tuesday that the government and the claimants would settle their own fees instead of charging just one party.