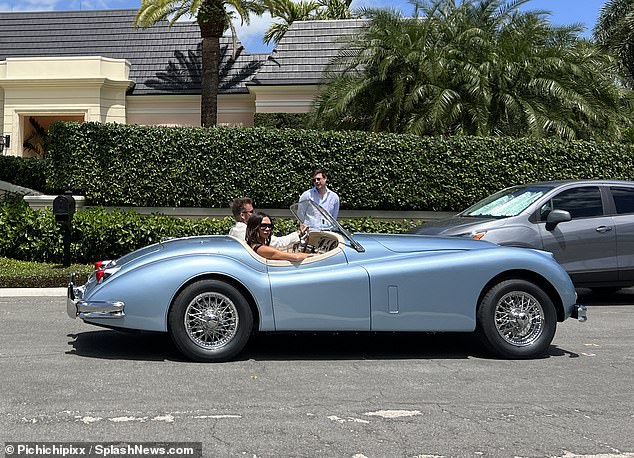 It was a wedding some two years in the making, after the disruptive force of COVID-10 and its impact on the modern world prompted inevitable delays and disruptions.

But while Nicola Peltz and Brooklyn Beckham’s extravagant marriage ceremony was an explosion of wealth, celebrity and media scrutiny, it also provided a sizeable platform for father-of-the-groom David to promote one of his post-football investments.

The former Manchester United and England midfielder gave car restoration company Lunaz – with whom he holds a 10 percent stake – a valuable assist by using one of their classic vehicles on the day.

Business savvy:  David Beckham gave car restoration company Lunaz – with whom he holds a 10 percent stake – a valuable assist by using one of their classic vehicles ahead of son Brooklyn’s Miami wedding over the weekend

Beckham, 46, was seen behind the wheel of an electrified and re-engineered the 1954 Jaguar XK140 following his eldest son’s wedding, conducted within the cloistered sanctuary of Miami’s exclusive Palm Beach.

The retired footballer was joined by fashion designer and former Spice Girl wife Victoria, 47, with both also seen occupying the same $500,000 (£383,502) classic car ahead of their attendance at the marriage ceremony.

Business savvy Beckham is an investor of UK based restoration company Lunaz, having taken a 10 percent stake in the company in June 2021.

Lavish:  The vintage car – later handed to Brooklyn and Nicola as they ventured out for a lavish brunch – was the product of thousands of hours of work from the company’s 120 strong team of craftspeople

The vintage car – later handed to Brooklyn and Nicola as they ventured out for a lavish brunch – was the product of thousands of hours of work from the company’s 120 strong team of craftspeople, designers and Electric Vehicle (EV) technicians and was built entirely in-house at the home of Lunaz in Silverstone, England.

The sustainable trend sees Lunaz tear out engines which pollute our atmosphere and replace them with zero exhaust emissions batteries and electric motors.

David Lorenz, Founder & CEO of Lunaz said: ‘In creating this beautiful, electrified Jaguar XK140, we are honoured to bridge the gap between David Beckham’s professional life, where he is an investor in Lunaz and his family life.

I do: Brooklyn and Nicola exchanged vows in Miami’s Palm Beach on Saturday

Lunaz is based at Silverstone which, aside from hosting F1 racing, has also become a hub for advanced automotive technology .

The 1961 Bentley Continental Flying Spur by Lunaz, costing £350,000, was awarded by TSWT Top Gear in its ‘Electric Vehicle Awards’ issue.

Getting involved: Business savvy Beckham is an investor of UK based restoration company Lunaz, having taken a 10 percent stake in the company in June 2021

‘This remarkable car is the perfect gift to his son Brooklyn and daughter-in-law, Nicola on their wedding day. In every respect, this extraordinary electric classic car by Lunaz symbolises a bright, positive future.’

Car fan Beckham is one of a group of wealthy Lunaz investors that includes the Reuben Brothers, the Barclay Family and Alexander Dellal.

Referring to his investment last June, he said: ‘Lunaz represents the very best of British ingenuity in both technology and design. I was drawn to the company through their work restoring some of the most beautiful classic cars through upcycling and electrification.

Lovely: The vintage Jaguar was built entirely in-house at the home of Lunaz in Silverstone, England

Booze, briefs, shades and shoes (oh, and his very own soccer club!)… the lucrative post football world of brand Beckham

Fragrances including: Instinct, Classic, Beyond, Homme, The Essence, Respect and Intimately

Shoes – Beckham has worked with Adidas, releasing his own capsule collection

Drinks – he is also the public face of Haig Club whiskey

Controversially, he is also the face of the forthcoming FIFA World Cup in Qatar, despite the Arab state’s appalling human rights record. The deal is understood to be worth £150million

In 2013 Beckham was recruited as the global ambassador for football in China, with the aim of promoting the Chinese game’s credibility in the far east and further afield

Other high-profile campaigns featuring the star over the years have included Armani and Gillette.

Main man:  Despite ending his career, Beckham has still maintained lucrative sponsorship deals with the likes of H&M, Adidas, Diageo, and L’Oreal

‘David Lorenz and his team of world-class engineers are building something very special and I very much look forward to being part of their growth.’

Beckham is also a brand ambassador for Italy’s Lamborghini, one of numerous business interests he has cultivated since retiring from professional football in 2013.

Despite ending his career, Beckham has still maintained lucrative sponsorship deals with the likes of H&M, Adidas, Diageo, and L’Oreal.

International icon: He also works with Adidas – a long-term sponsor – with his name being plastered across the bottom of a trainer in 2019

Last April it was reported that he makes a whopping £50,000 a day from his lucrative branding business.

According to The Mirror, it saw sales of a staggering £17.4million from fragrances, watches, clothes and footwear in 2020 – despite much of the UK remaining in lockdown as a result of the COVID-19 pandemic.

The multi-million pound income from sales of the popular goods, sold in many major stores, worked out at £47, 671 a day.

The Mail on Sunday recently revealed that Beckham has agreed sell 55 per cent of his company DB Ventures to Authentic Brands Group – the organisation that owns fashion brand Juicy Couture and US women’s shopping chain Forever 21.

The New York-based firm also works with basketball legend Shaquille O’Neal, who is a hero of Beckham.

Speaking in January, sources close to the star say the deal has been done to pay off debt, remove a number of current business partners and free up some capital for the company.

The London-based business boasts Beckham’s endorsement deals with Tudor watches, his Haig whisky brand and most recently his controversial move to be the face of this year’s Qatar World Cup.

In demand: Beckham also works with Tudor watches (pictured wearing one of their timepieces)

Happy family: David and Victoria are parents to Brooklyn, 21, Romeo, 18, Cruz, 15 and Harper, nine, and their commercial success has earned them the alias Brand Beckham

The firm, which is run by Beckham and his best friend, former football agent David Gardner, also launched their own television production firm three years ago.

While some of the money will be paid out to others, Beckham is expected to scoop up to tens of millions. Together with wife Victoria, he is thought to be worth £360 million.

Beckham’s decision to go into business with Authentic Brands Group could help boost his fame in the US.

It could also boost the reputation of his football team, Inter Miami, which he launched in March 2020.

One source told The Mail on Sunday: ‘The figure of £200 million is unexpectedly high for his company, he has had a result here.

‘While the money is a big deal for David, so is cracking America properly. There are a lot of people there who don’t really know who he is. Having these people owning his business, he hopes, will change that. That should have a knock- on effect on his football club.’