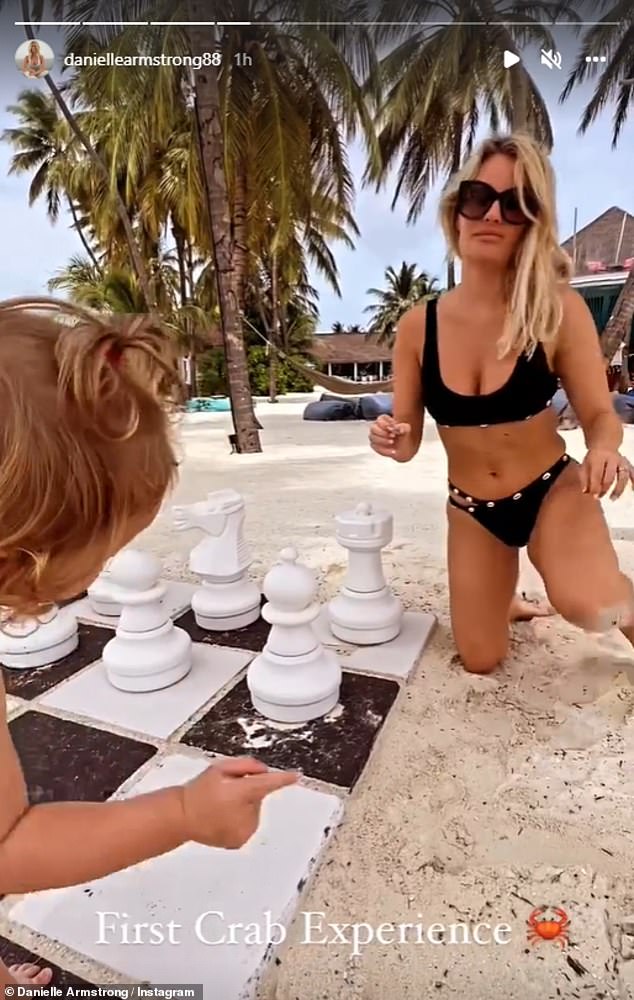 She married her childhood sweetheart Tom Edney last week after getting engaged in 2020.

And Danielle Armstrong gave a glimpse of her honeymoon in Dubai on Wednesday, as she spent quality time with her new husband and their daughter Orla, two.

The former TOWIE star, 34, took to her Instagram story as she relaxed on the beach with the toddler and showed off her toned figure in a black bikini.

Relaxing: Danielle Armstrong flaunted her toned figure in a black bikini on Wednesday during her honeymoon in Dubai with husband Tom Edney and their daughter Orla, two.

She had her gym-sharpened abs and nimble legs on display in the summery two-piece adorned with pretty white shells.

The beauty accessorized her beach look with huge glasses and wore her blonde locks in loose waves over her shoulders.

In the sweet video, she showed Orla a crab she found on the sand while they were playing on a large chessboard.

Trip away: The former TOWIE star, 34, took to her Instagram story while relaxing on holiday with the toddler as they enjoyed a beach trip together

Other glimpses of the honeymoon showed them enjoying a boat trip as a family, where Orla looked adorable in a leopard print bathing suit.

Danielle looked stunning in a black cover-up dress that she paired with a white bridal choker.

After the wedding, Danielle revealed that she and new husband Tom took their toddler daughter Orla on their two-week honeymoon.

Beach Day: She showed off her gym-sharpened abs and nimble legs in the summery two-piece adorned with pretty white shells

Toddler: In the sweet clip, she showed Orla a crab she found on the sand while they were playing on a large chess board

Danielle used her Instagram account from the Emirates Business Class Lounge at Dubai airport on Sunday to explain why she and her construction director beau took their daughter on a trip.

She shared some adorable family snaps on her account, writing, “Honeymoon and a toddler… this must be fun.

Beautiful: Danielle looked stunning in a black cover-up dress which she paired with a white bridal choker during the boat ride

“Besides, we’d just talk about her and look at her pictures so we might as well have her with us. So here’s married life and the three of us #newlyweds #honeymoon #justthe3ofus.’

Danielle also shared a glimpse of her honeymoon wardrobe, revealing that she had a personalized blazer made with the word “wifey.”

Last month, Danielle and Tom said “I do” three years after they first started dating, and two years since they got engaged in 2020.

Family: It comes after Danielle revealed on her Instagram account on Sunday that she and new husband Tom would be honeymooning their toddler daughter Orla

The newlyweds tied the knot at Ashridge House estate in Hertfordshire, set in 190 acres of beautiful gardens for 100 guests.

While Danielle has six bridesmaids, it was their daughter Orla’s big day as she played the important role of flower girl.

They say she behaved “as good as gold” all day, but in the morning there was a little drama.

“Everything went smoothly and half an hour before the ceremony it got a bit chaotic,” Danielle told OK! magazine.

Cheers: Danielle took to her social media to explain why she and her construction director Beau took their daughter on a trip

“Everyone was wearing hair and makeup and drinking champagne, and then suddenly Orla started crying because she was hungry and wanted cookies.

“It was approaching her nap time, but we were like, ‘She’ll just have to get through it!’”

Danielle wore a beautiful lace dress by Berta design from The Wedding Club in Knightsbridge.

Speaking of the stunning ensemble, the fitness guru said, “Our venue had a lot of history and one of the rooms had a very Italian feel to it.

Chic: Danielle also shared a glimpse of her honeymoon wardrobe, revealing she had a personalized blazer made with the word ‘wifey’

‘I wanted that feeling in my dress too. It was the second dress I tried. I had the exact same feeling I had with the venue – I just knew.’

Danielle chose to walk down the stairs, rather than down the aisle, for the wedding, while Tom gushed that she looked “absolutely gorgeous” as she went down the stairs.

Tom said, ‘I loved her dress. I watched her as she walked downstairs and she looked absolutely beautiful. I knew she would look beautiful in whatever she was wearing.’

About their vows, Danelle said, “We didn’t have a religious ceremony, so we wanted the words we chose to really mean something to us.

“The registrar was nice. We talked about respect for each other and having a sense of humor. It’s about being best friends, but also husband and wife.’

Danielle gushed it was a Romeo and Juliet thing when they tied the knot at their beloved wedding venue, which Danielle said was perfect as soon as they saw it.

After the couple said “I do,” Natalie Cole’s eight-piece band played This Will Be (An Everlasting Love) and enjoyed a fun reception with personalized drinks, the publication reported.

Danielle and Tom met when they started high school in 1999 and were friends for eight years before it blossomed into a romance.

In his wedding speech, Tom referred to their meeting and said that according to OK! never imagined that his wife would walk through the school gates.

Danielle admitted she cried during her first dance to Luther Vandros’s So Amazing, who saw the couple lovingly along with their daughter Orla as they celebrated their union.

The couple continued to party with their friends and loved ones until the early hours, while the couple admitted they want more children as they look to the future.