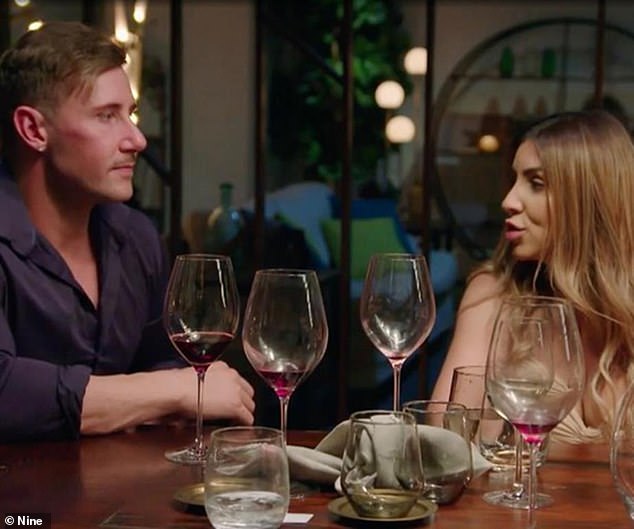 Married at First Sight stars Daniel Holmes and Carolina Santos are set to rock the experience with a cheating scandal this season.

According to an article in New Idea magazine, the couple will reveal their “secret attraction” in the coming weeks.

During Wednesday night’s dinner chaos, the couple hit it off as Domencia raged against Daniel’s wife, Jess.

Sparks: Married At First Sight’s Daniel Holmes and Carolina Santos (both pictured) are set to rock the show with a ‘secret attraction’ in the coming weeks, according to a report

Carolina checked in to see how Daniel was doing amid the endless drama, with him clearly grateful for the interest.

Carolina said if he needed advice, then to let him know she was available, with her struggles with husband Dion.

The Brazilian bride, 33, admitted she struggled to find a connection to Dion.

“There’s not really any attraction there,” she complained. “I asked for a big guy. So he is not. It’s actually very small.

Could this be the next scandal? According to a report in New Idea, the pair are expected to be the couple with a “secret attraction” this season. Pictured: Caroline

She added: “My husband doesn’t really like working out. He never went to the gym.

Carolina then asked Daniel to choose the most attractive bride in the room and, to her surprise, he chose her.

“Don’t tell my husband that,” she laughs cheekily.

All eyes are on Daniel: “There’s not really any attraction there,” Carolina complained. “I asked for a big guy. So he is not. It’s actually very small. Pictured: Daniel

Daniel was at the center of Wednesday’s dinner drama with Domenica raging against his wife, Jess.

“Jessica thinks she deserves her perfect relationship on a silver platter. That’s not how it works, mate,” Dom told producers.

“She has absolutely no respect for Daniel,” she continued, before adding, “Jess” just blatantly put him down.

“She’s just, like, on a high horse thinking she’s too good to be in this relationship.”

Bombshell: Carolina then asked Daniel to choose the most seductive bride in the room and, to her surprise, he chose her