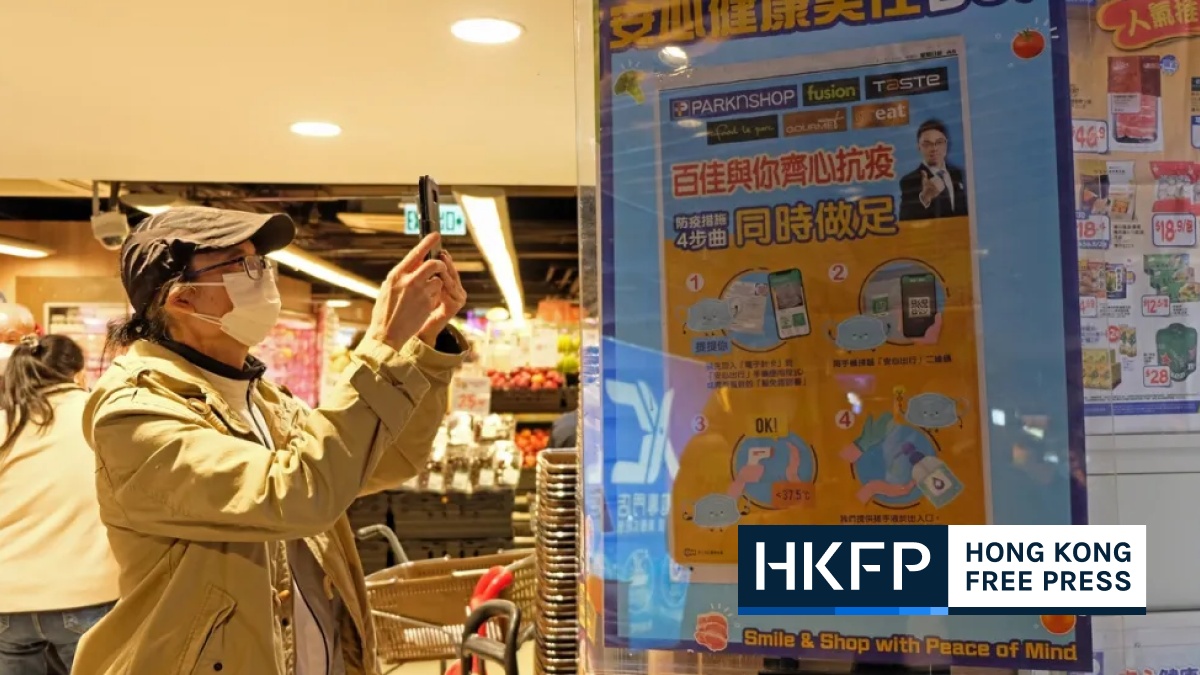 From Thursday, people must also use their phone’s LeaveHomeSafe contact tracing app to scan a QR code to enter specified premises.

Malls and grocery stores have put up signs reminding people to scan the QR codes using LeaveHomeSafe, and to have their vaccination records with them.

As many as 70 QR codes were plastered on a bridge between Tsing Yi MTR station and Maritime Square shopping mall, a video posted by former Kwai Tsing District Council vice-chair Dennis Cheung showed.

At the Cityplaza mall in Tai Koo, an HKFP reporter observed only a handful of people scanning the LeaveHomeSafe QR code to enter through one of the entrances to the shopping centre. Security staff nearby did not intervene when others walked in without scanning.

A similar scene was spotted in Pacific Place in Admiralty.

At a Kennedy Town fast food restaurant, an elderly man was stopped at the entrance as he was unable to present his vaccine record. Staff suggested that he could take his food away instead.

Authorities said earlier that there would be two enforcement methods for the vaccine pass. While restaurants will proactively scan people’s vaccination records, higher traffic venues such as malls and supermarkets will only see spot checks.

The launch of the vaccine pass comes as Hong Kong battles its worst Covid-19 wave yet, exacerbated by the spread of the highly transmissible Omicron variant. The city has reported four-digit daily cases for the past two weeks, with the death toll reaching new highs.

Business owners in shopping malls and wet markets told local media that they feared the vaccine pass would deter customers, especially senior citizens who may not know how to use the LeaveHomeSafe app or have not been vaccinated.

Hong Kong confirmed 8,798 new Covid-19 cases on Thursday, among which three were imported infections. Another 50 deaths were recorded in the past 24 hours.

The fatalities were aged from 52 to 97. Of the five patients under the age of 60, all had chronic illnesses, such as cancer and Alzheimer’s disease, Hospital Authority Chief Manager Lau Ka-hin said during Thursday’s daily Covid-19 briefing.

“There have been 255 Covid-19 deaths since the fifth wave began. Most of them involved the elderly,” Lau said.

The recent outbreak is fuelled by the more infectious, but less lethal, Omicron variant.

In the past four waves, the mortality was 2.2 per cent.

Hong Kong has recorded 84,046 Covid-19 cases and 460 deaths since the epidemic began more than two years ago.

Cases to peak in March

Even as Hong Kong’s Covid-19 case counts continue to set daily records, health experts warn that the epidemic has not yet peaked.

“[With] our mathematical model, which has so far tracked the actual empirical trajectory very well, unfortunately, we predict that the fifth wave will peak somewhere between the first and the second week of March,” said Gabriel Leung, the University of Hong Kong’s medical school dean.

The epidemic is expected to decline only in April, he said.

Addressing reporters at Gleneagles Hospital in Wong Chuk Hang, where a Covid-19 vaccination centre administering BioNTech jabs to children opened on Thursday, Leung appealed to parents to inoculate their kids.

He said many countries with Omicron outbreaks saw infections climb as students returned to the classroom.

“That is why it is so important between now and end of April, if the plan is to go ahead with in person classes then, to vaccinate as many children as possible,” Leung said.

The government announced on Tuesday that schools’ summer holidays would be brought forward to March with the hope of restarting face-to-face classes in the latter half of April.

Children in Hong Kong aged three and above can currently receive the Sinovac jab, while those aged five and over can receive the BioNTech vaccine.

Hong Kong has reported 80,046 and at least 460 deaths since the pandemic began.