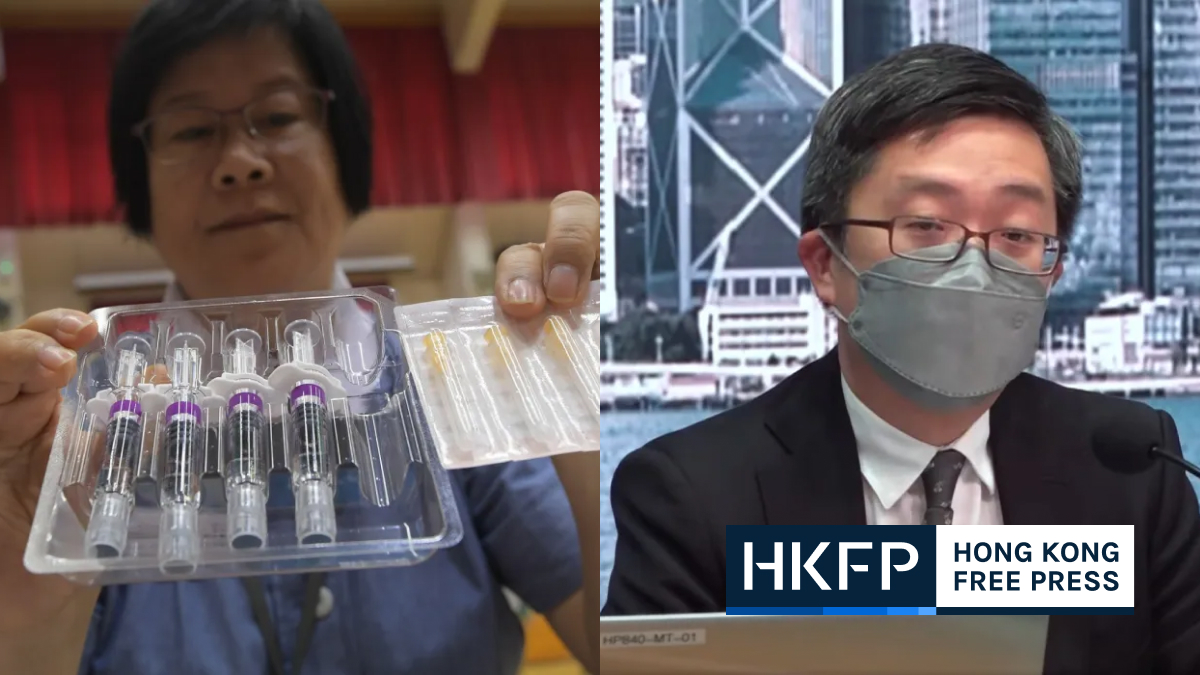 With Covid-19 “vaccine pass” measures set to roll out in Hong Kong on Thursday, a health official said the restrictions may become stricter in the future as he urged citizens not to seek out legal loopholes.

Starting on Thursday, residents aged 12 or over will be barred from entering 23 categories of premises – including restaurants, malls, supermarkets and wet markets – unless they can present valid proof of at least one dose of a Covid-19 vaccine.

At a vaccine pass press briefing on Monday afternoon, officials said there will be two enforcement methods. Whilst restaurants will proactively scan people’s vaccination records, spot checks will be carried out at more populated venues such as malls and supermarkets.

But there will be exemptions for those who are only purchasing or collecting takeaway meals, delivering or collecting “an article,” or simply passing through scheduled areas to go home or to work.

Speaking on RTHK radio on Tuesday morning, the Deputy Secretary for Food and Health (Health) Kevin Choi said the measures were to urge “citizens to get jabs, but not to find loopholes and avoid vaccinations.”

“We do not want many people to be exempted, which is against the reason we implemented the vaccine pass,” he said. “[P]eople may find it unfair as to why the vaccine pass is required when they visit other shops in a mall, but it is not the case for those getting takeaways.”

The health official also said the requirements of the vaccine pass may become stricter in the future, and the existing areas of exemption are subject to further adjustment.

When asked about whether a “grey area” will emerge when customers are en route to buy takeaway food or browsing restaurants at a mall, Choi said they “will look at the evidence in individual cases” and exemptions are “in theory, mainly targeting citizens who already ordered at a restaurant… where a record usually exists.”

“Even if you are just buying takeaway, according to our principles on fighting the outbreak, it is better that you are already vaccinated as – when you go out – there is already a risk.” Choi added.

As for exemptions for people “delivering or picking up of an article,” Choi said a clear example would be “workers delivering goods to supermarkets.” He said that, in other cases, law enforcement may ask why an exchange of goods is being carried out at a mall.

Choi later said on Commercial Radio on Tuesday that, although walking through malls to work or return home will become a listed vaccine pass exemption, a “reasonable excuse” will still be necessary.

When Choi was asked about whether unvaccinated people will need to carry around their residential or work address proof to be eligible for exemptions, he said the situation should be “similar to checking HKID cards,” and any reasonable explanation will be considered by law enforcement.

For the vaccine pass arrangement, Choi said people are allowed to use photos or screenshots of their vaccination record with a scannable QR code, but they will still have to scan the LeaveHomeSafe QR code separately to enter scheduled premises.

When people return to Hong Kong from overseas or the mainland, Choi said they will be provided with a QR code at border checkpoints to act as their vaccination pass.

The vaccine pass scheme will enter its second stage from April 30 and people aged 18 or above will be required to take at least two Covid-19 jabs to remain eligible. From June 30, all citizens aged 18 or above will have to have received a third jab within nine months of their second dose, while two doses will be required for those aged between 12 to 17.

Although the government considers people who had two jabs “fully vaccinated,” with the third just a “booster shot,” Choi said scientific evidence showed that only three jabs could provide sufficient protection against the Omicron variant. Therefore, the vaccine pass will make a booster a requirement during its third stage.

Currently, two judicial review applications have been filed to the High Court asking for the suspension of the vaccine pass restrictions.

Last Friday, a woman applied for a legal challenge, asking the court to issue an injunction stopping the government from rolling out the “vaccine pass” and ultimately excluding premises “closely related to people’s basic livelihoods,” such as wet markets, supermarkets, malls and restaurants.

A previous application claimed the policy was infringing personal freedom and thus unconstitutional.

Judicial reviews are considered by the Court of First Instance and examine the decision-making processes of administrative bodies. Issues under review must be shown to affect the wider public interest.