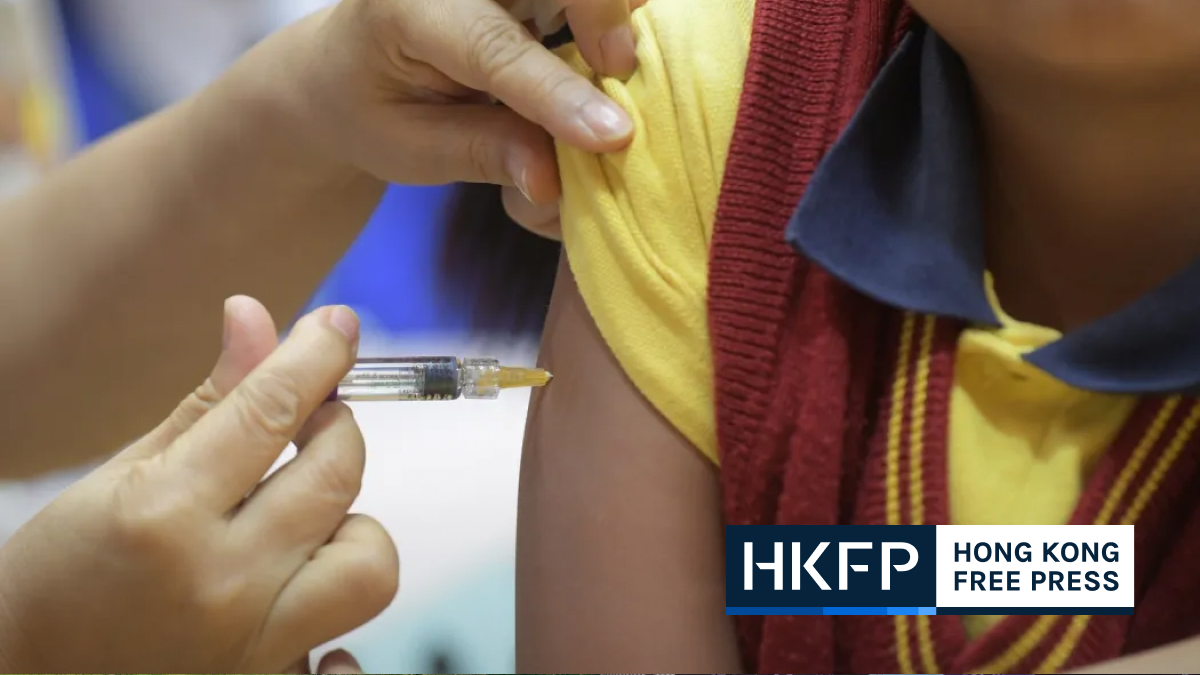 Hong Kong will lower the age limit for receiving the Chinese-made Sinovac Covid-19 vaccine to 3 starting on Tuesday, as the city reported 1,347 new infections on Sunday.

The Centre for Health Protection (CHP) said on Sunday that among the latest infections, two were imported and the rest were locally transmitted. Meanwhile, the death toll remained at 221 as more than 2,000 people tested preliminary-positive for the virus.

Meanwhile, starting on Tuesday, the age limit for receiving China’s Sinovac jab will be lowered from five to three, the government announced on Sunday evening. Children aged five to 11 may also receive the German-developed BioNTech vaccine starting on Wednesday.

Larry Lee, chief manager (integrated clinical services) at the Hospital Authority, told the press on Sunday that the number of Covid-19 patients and those who tested preliminary-positive for the virus have “seriously exceeded” the capacity of public hospitals. The city’s quarantine facilities were also “saturated.”

The Hospital Authority decided to roll out new measures to prioritise those with severe symptoms, elderly and children patients in the allocation of isolation beds. Lee said those who had milder symptoms should stay at home while waiting to be hospitalised. While such an arrangement was “not ideal,” the authorities had to reserve medical resources for patients who were most in need, he said.

No lockdown ‘at present’

On Saturday, Chief Secretary John Lee told reporters after meeting mainland officials that there would be no China-style city-wide lockdown “at present.”

“We do not have this plan because we believe that, with the enhanced anti-epidemic measures that we have introduced, it will have a beneficial effect and because we have just introduced some tighter social distancing measures,” he said.

Lee added that that Beijing will be sending mainland experts to assist with epidemiological investigations and with the construction of isolation facilities in Hong Kong.

The central government will also supply rapid antigen test kits, as well as anti-epidemic supplies such as beds, furniture for isolation venues, masks and protective gear, Lee said: “[W]ith the assistance from the Mainland, we believe that our capability of fighting the pandemic will be increased and we will be seeing positive improvement in those areas.”

The Consumer Council conducted a study to compare prices in two major supermarkets over the past month and found that many products were more expensive than before.

Speaking on Commercial Radio on Sunday, the watchdog’s chief executive Gilly Wong attributed the price increases to residents stocking up on goods in short supply do to pandemic-related import issues.

Wong said overall consumer prices rose by two to three per cent in the second half of 2021, according to the council’s Online Price Watch platform which monitored prices in six local supermarkets and chain stores.

The general public sensed the prices were increasing, Wong said, as around 30 to 40 per cent of products had fewer discounts. She reminded people to check and compare the prices, saying the price differences of the same product could be as high as 10 per cent.

In the same radio programme, the chairman of the consumer watchdog and barrister Paul Lam urged citizens to make purchases “rationally.” He said that, while it was reasonable for people to plan ahead amid the pandemic, they should not buy more than what they needed as it may put pressure on supply.

“It is reasonable for citizens to get prepared, but they should not swarm [the supermarkets and stores]… this kind of herd behaviour will make the atmosphere in society very tense and will not help the situation,” Lam said.

Man to appear in court

He was arrested by police on Friday on suspicion of inciting others to breach section 32 of the Prevention and Control of Disease Ordinance (Cap. 599A), which stipulates that people shall not expose others to infection.

Police said the same man allegedly made posts on the same discussion platform back in May last year to encourage other people to use violence against judges. He therefore faces another charge under the Offences against the Person Ordinance.