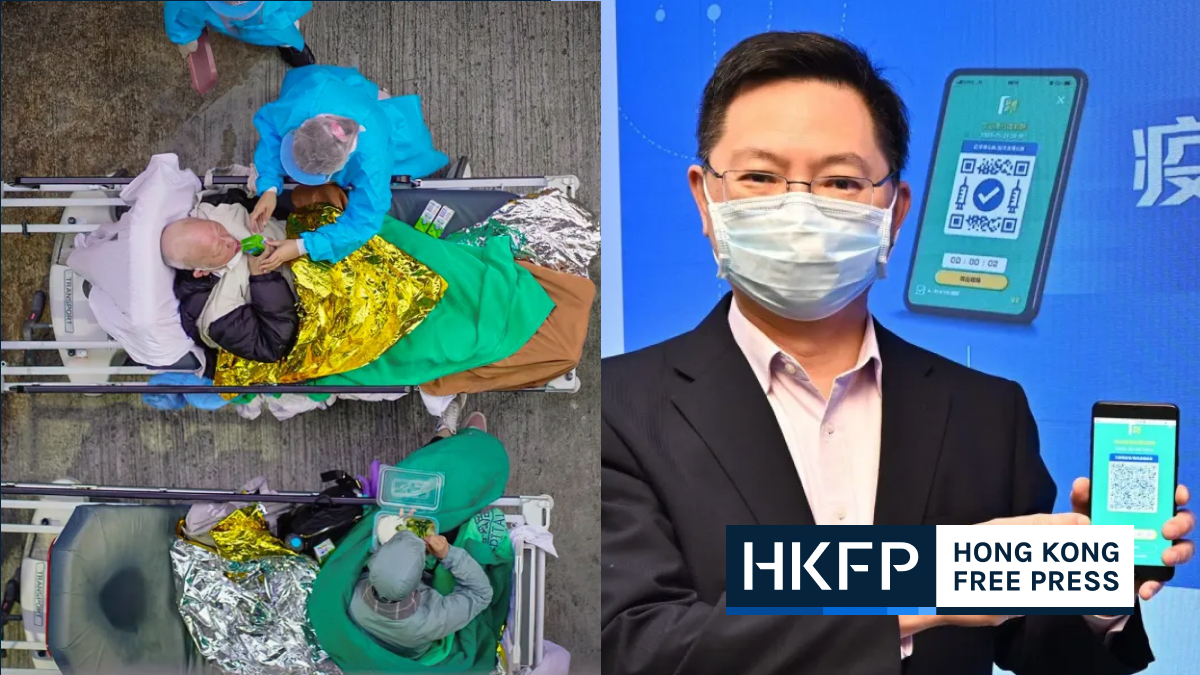 Hong Kong confirmed another record high of 7,533 Covid-19 cases on Monday, with an 11-month-old girl among the newly reported fatalities.

Authorities did not state the breakdown of how many local and imported cases were among the new infections at the daily Covid-19 briefing, marking the first time this data has not been provided since the pandemic began.

The deaths of another 13 Covid-19 patients were recorded in the past 24 hours, including an 11-month-old baby. She was admitted to hospital at around 4 a.m. last Saturday with convulsions, and tested positive for the virus with a high viral load upon admission, Lau Ka-hin, the Hospital Authority’s (HA) chief manager of quality and standards, said.

The patient was sent to the intensive care unit at Queen Elizabeth Hospital, and died at 7 p.m. that day.

“Some of her family members, including her caretaker, parents and grandmother, tested positive for Covid-19 via rapid antigen tests at home,” Lau said.

The case will be sent to the coroner’s court for investigation to ascertain the cause of the death. If confirmed, the infant would become Hong Kong’s youngest Covid-19 fatality to date. Last week, a three-year-old who had tested positive for Covid-19 also passed away.

Hong Kong is in the midst of its fifth wave of coronavirus infections, which began at the end of last year and has seen the city introduce its strictest anti-epidemic restrictions yet. The number of cases in the current outbreak accounts for more than three-quarters of the city’s total since the pandemic began over two years ago.

With four-digit case loads confirmed daily over the past week and a half, the fifth wave has forced the government’s pandemic work into overdrive. During Monday’s press conference, health authorities said that they were in talks with private hospitals to take in non-Covid patients and free up resources at public hospitals. Only public hospitals in Hong Kong currently admit Covid-19 patients.

Lau added that some patients under convalescent care, as well as those undergoing treatment such as radiotherapy and kidney dialysis, would be transferred to private hospitals.

“We hope that we can start doing this in the next two or three days,” Lau said.

A number of Covid-19 clusters have been identified over the weekend, including at the Sheung Shui slaughterhouse and a public housing estate in Sha Tin.

Karen Grepin, an associate professor at the University of Hong Kong’s (HKU) School of Public Health, told RTHK on Monday that the fifth-wave outbreak had yet to reach its peak.

“All of the data seems to suggest that we are very much at an early stage in this wave and that cases will continue to rise to the point where [there are] literally hundreds of thousands of cases in the coming weeks,” she said, referring to modelling done by HKU epidemiologists and virologists.

Vaccine pass to come into force

Meanwhile, Hong Kong will implement a vaccine pass on Thursday, which will effectively bar unvaccinated people from entering two dozen premises. While most of the premises are currently closed, such as gyms and party rooms, others, including supermarkets, shopping malls and restaurants, will no longer be accessible to those who have not been jabbed.

The latter premises will only be subject to spot checks, however, and people will not have to show their vaccine records upon entering. Authorities likened the rule to a regulation requiring Hong Kong identity cards to be carried at all times.

The government clarified earlier that unvaccinated people who must access malls to go home or go to work would not be treated as violating the rules.

To qualify for a vaccine pass, the person must have received at least one Covid-19 jab, or have a doctor’s certificate certifying they are medically unfit to be inoculated.

“Getting vaccinated is an important part of fighting this epidemic. Even if they are infected, those who are vaccinated will have milder symptoms and recover faster,” Deputy Food and Health Secretary Kevin Choi said at Monday’s briefing. “This will reduce the burden on our medical system, allowing those in need to get care.”

Anybody caught using somebody else’s vaccination records as their own could face legal consequences, Diane Wong, deputy director of the Food and Environmental Hygiene Department, said.

People can either upload their vaccination record to the LeaveHomeSafe app, or have a paper copy ready to present at the premises.

Amid concerns about personal privacy, Tony Wong, deputy government chief information officer at the Innovation and Technology Bureau, said that information recorded by the premises’ QR code scanners – including name and Hong Kong identity number – would be encrypted.

“Only when there is a case of infection at a venue, will the Centre for Health Protection request the operators to send through a one-time password to… send this encrypted data to the CHP for contact tracing,” Wong said.

“We are confident that all of the data kept in the mobile app is not personally identifiable data. Personal privacy is well protected under the current design.”

The city has seen an increase in vaccine uptake since the fifth wave started, with 76 per cent of the city’s eligible population now double-vaccinated against Covid-19.

Correction 21/2: A previous version of the headline for this report incorrectly stated the number of Covid-19 cases on Monday.