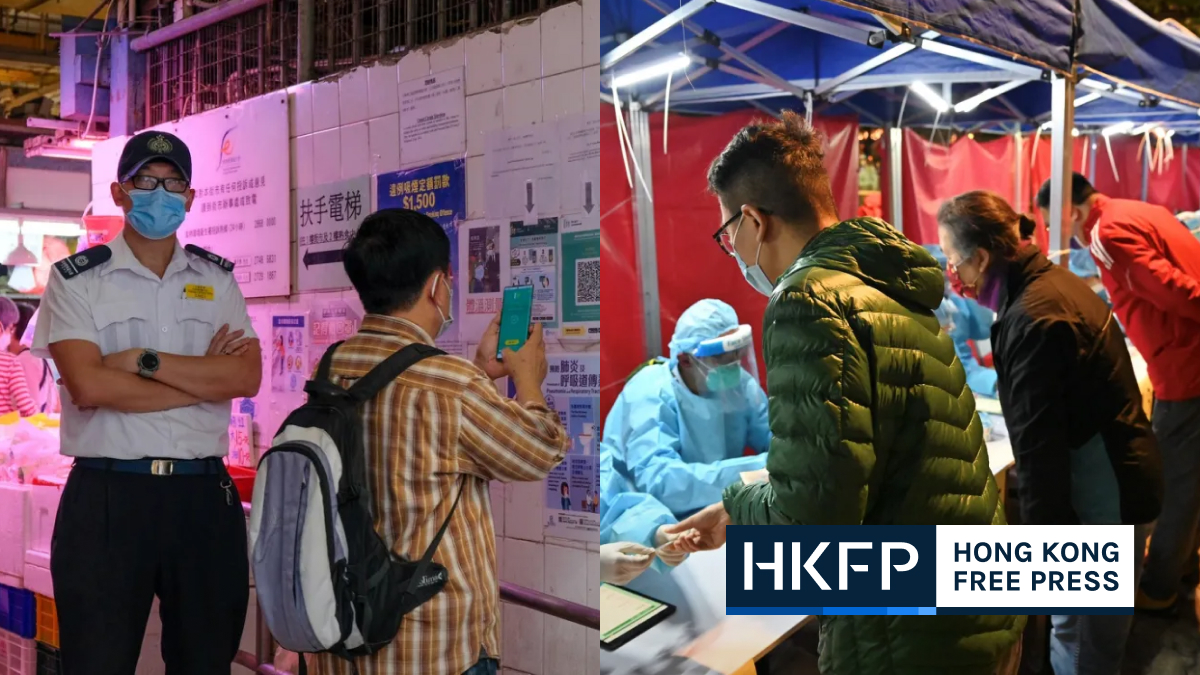 Law enforcement may carry out spot checks on people’s vaccination records in malls, department stores, supermarkets and wet markets once the “vaccine pass” is implemented, according to a Hong Kong official. However, unvaccinated people who must access malls to go home or go to work will not be treated as violating the rules.

Meanwhile, a university study has estimated that around 250,000 Hongkongers will be infected in the city’s fifth wave of the Covid-19 pandemic, with case numbers not reaching their peak until late February or March.

According to Chan, there will be two ways of implementing the vaccine pass – one requires citizens to present their LeaveHomeSafe contact-tracing app and vaccination records upon entry for staff to scan with an official app. This applies to “high risk premises” such as restaurants and gyms.

For places with high traffic, such as malls and supermarkets, Chan said visitors would have to scan the LeaveHomeSafe code, but they would not have to proactively present their apps. However, law enforcement may conduct ambush-style checks, and those who fail to provide valid vaccination proof will be subject to a fixed HK$5,000 fine.

Chan said if it was a “necessity” for those without a Covid-19 vaccination to pass through a mall to return home or go to work, and there was no practical alternative route, that would constitute a “reasonable excuse” and they would not be treated as breaching the rules.

A research team led by Sean Yuan, an assistant professor at the Department of Biomedical Sciences in the City University of Hong Kong, has forecast that 250,000 people in Hong Kong could be infected with Covid-19 during the current fifth wave.

Working with teams at the Sungkyunkwan University in Seoul and Imperial College London, Yuan and his team developed a mathematic model to evaluate the ease with which different age groups can contract Covid-19, according to social contact statistics. They predicted that quarter of a million people could catch the virus if social contact was reduced by 25 per cent, compared to the levels seen during the Christmas and New Year holidays.

Yuan said the peak for the city’s fifth wave of pandemic is expected to arrive at the end of February or in March, and the case numbers will only gradually drop when the coverage of the third jab has reached a certain level.

On Tuesday, respiratory disease expert David Hui told Ming Pao that the number of cases could surpass the 1,000 threshold on Thursday and reach 1,500 between Saturday and Monday, citing internal estimated by the Hospital Authority.

Hui said the effectiveness of the tightened social distancing measures could only be evaluated after observing the case numbers and number of untraceable cases in 14 days. If the statistics do not go down, the next step would be for the government to consider implementing the vaccine pass on public transports and at outdoor premises, including parks and beaches.

A test centre in Sheung Shui suddenly halted operations on Wednesday, according to a statement by Edward Lau, a lawmaker from the pro-Beijing party Democratic Alliance for the Betterment and Progress of Hong Kong.

Lau said the service provider at the test station in Po Wing Road Sports Centre had received a notice from the government requesting it to move staff to assist with testing in other districts.

The lawmaker said he was “discontent with the Food and Health Bureau’s rushed decision with zero notice,” and questioned the Covid-19 testing capacity in the city.