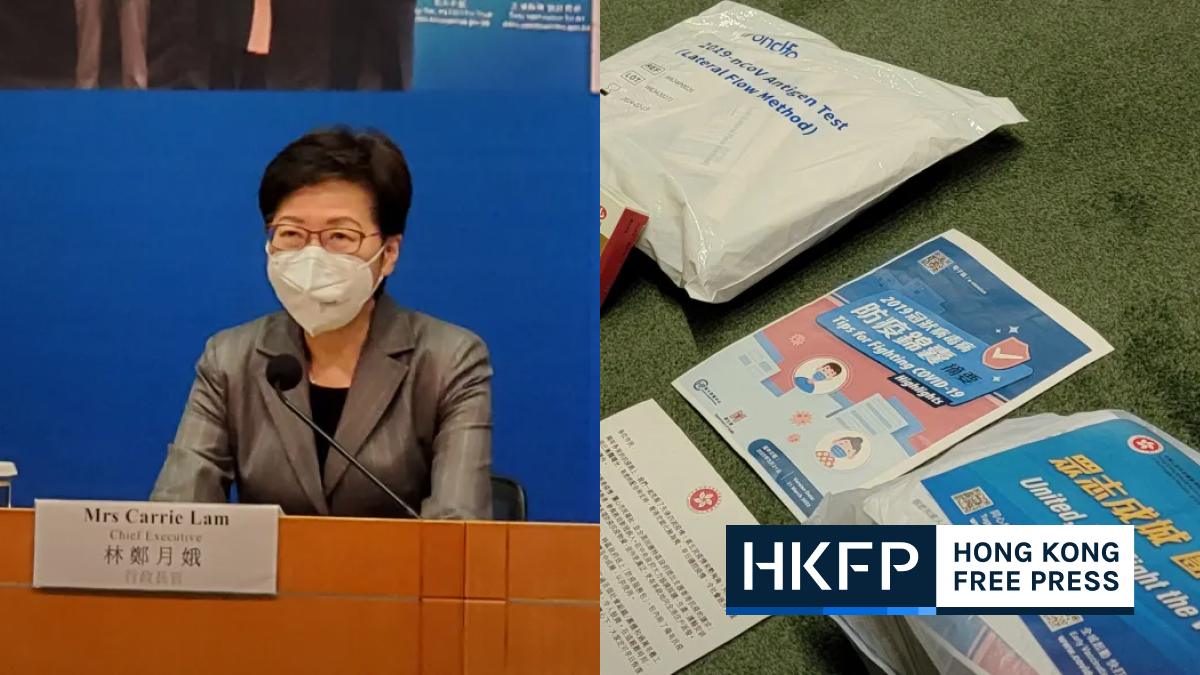 The government may ask Hongkongers to take part in a mass testing exercise at home, using rapid antigen tests to be distributed to three million households, in order to assess the degree of infection in the city, Chief Executive Carrie Lam said.

A package containing 20 of the rapid test kits, 20 KN95 masks, two boxes of Chinese medicine and pamphlets with medical information will be distributed to all households over seven days starting on Saturday.

The exercise would be separate from a planned compulsory city-wide testing programme, originally expected to start in March but later postponed.

The chief executive said again on Thursday that it was not “the best time” to push for citywide testing, following the government’s decision earlier in March to suspend the programme.

“We still haven’t reached what we thought were the best times to implement compulsory universal testing, either at the beginning of the pandemic or at its end. It seems that we haven’t reached the end yet with over 7,000 cases [a day],” said Lam.

“But we will soon have another announcement, since we will distribute so many rapid antigen test kits in the Covid-19 service kits. We will announce later whether we can use this relatively accurate and a tool convenient to citizens to understand the infection situation of Hong Kong in a short period using these test kits.”

The chief executive did not say whether the scheme under consideration would be mandatory.

The government initially announced plans to test all residents in March. But Lam said in early March it was no longer a priority after mainland medical expert Liang Wannian urged the city to focus on reducing the numbers of infections, serious cases and deaths.

Lam said the government had finished packing around 1.6 million of the Covid-19 service kits, amounting to 45 per cent of the total, and if people could not collect a kit at their homes, they would be able to get one at distribution points across the city.

Hong Kong has since late December been overwhelmed by a fifth wave of Covid-19 infections involving the more infectious but less deadly Omicron variant. There has been an exponential increase in both cases and deaths, as the unvaccinated elderly fell victim.

After almost two years of successfully curbing the pandemic the city has now recorded 1,157,415 infections and 7,825 deaths.