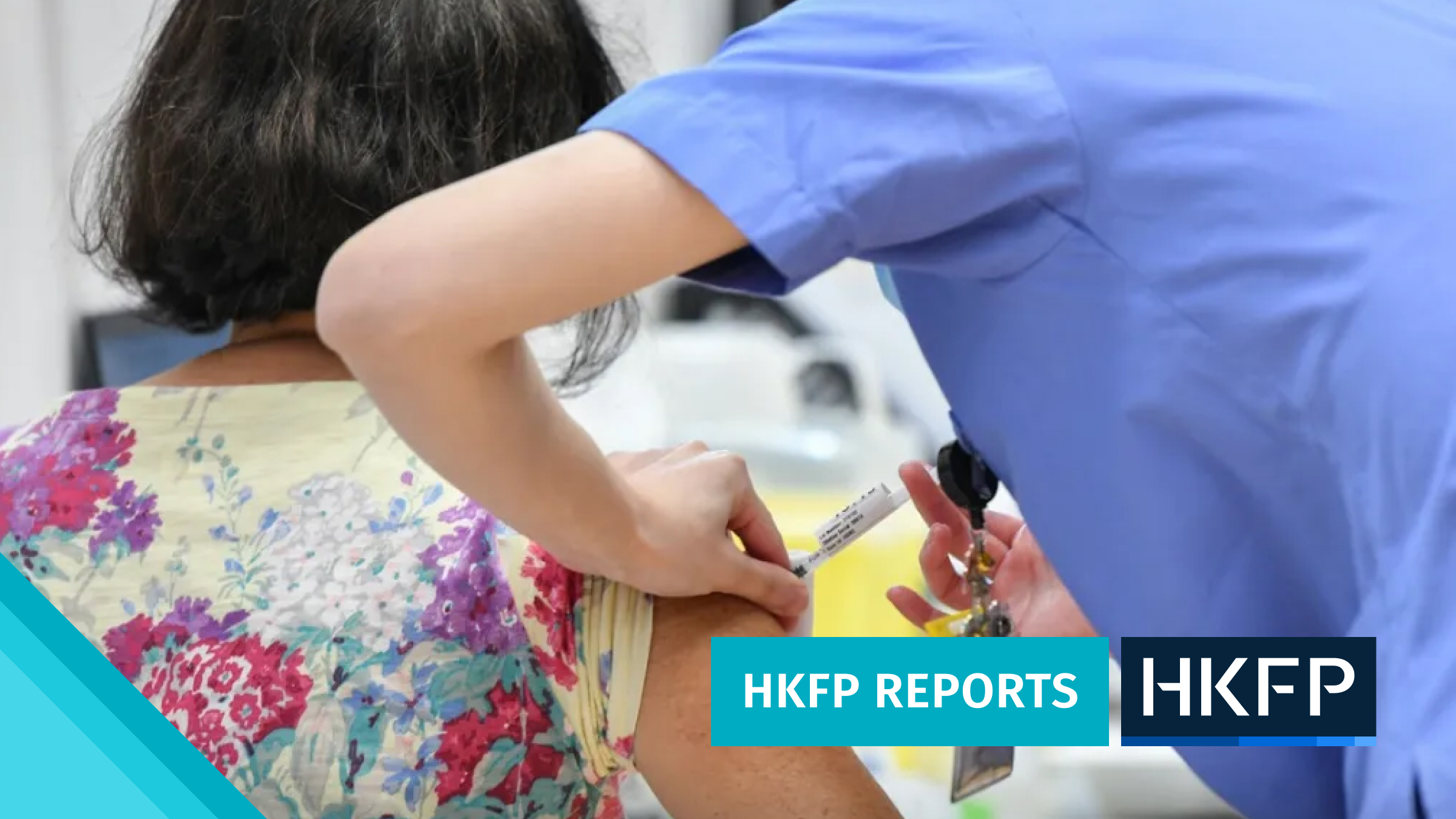 Hong Kong is set to roll out a Covid-19 vaccine pass on Thursday, almost exactly one year after the vaccination programme was launched, which will bar unvaccinated citizens from entering shopping malls, supermarkets, places of worship and other premises.

Since the government announced the scheme as part of its latest and “most stringent” Covid-19 measures under the fifth wave of infections, general practitioner Koni Chan has seen more people knocking on her door for an exemption certificate.

Doctors in Hong Kong may certify a patient to be unfit for receiving either of the currently available Covid-19 jabs in the city, namely the Corona Vac by Chinese manufacturer Sinovac or the German-made Comirnaty by BioNTech.

But the threshold for granting such an exemption was high, the 32-year-old doctor said, referring to a list of medical reasons that would justify a person for not being inoculated. For the BioNTech jab, they included allergies to the active substances or any ingredients of the vaccine, or suffering from an inflammation of the heart muscle or swelling and irritation of the pericardium following a mRNA Covid-19 vaccine injection.

The threshold was further tightened last Monday, after the Department of Health (DoH) revised a doctors’ guide and removed “pregnant or lactating women” from the reasons for not receiving the Sinovac vaccine. The reasons that remain for not receiving the Chinese-made jab included a history of allergic reactions to other inactivated vaccines, severe neurological conditions and uncontrolled severe chronic diseases.

The certificate is valid for no more than three months, unless there are special medical reasons. Even if particular medical conditions were identified, the maximum validity period of the document would only be six months.

Doctor Choi Kin, president of the Hong Kong Medical Association, said on Commercial Radio on Monday that the tightening of the exemption threshold came after information from overseas studies on the vaccines became available.

“It prevents doctors from signing the certificate out of sympathy for their patients when they start begging,” Choi said, adding that issuing an unjustified exemption may amount to professional misconduct.

Despite the official guidelines in place, some of Chan’s patients were upset when she refused to hand out an exemption certificate. They questioned why they were unable to obtain the document even after they had paid for a pre-vaccination check-up programme.

“There were quite a lot of young people who joined the programme, but they usually did not succeed in getting an exemption certificate. We wouldn’t issue one simply because they badgered us,” she said.

Speaking to HKFP under a pseudonym for fear of reprisal, public hospital general physician KC said he had handled more medical exemption requests following the announcement of the vaccine pass. He said he understood why some patients may have doubts about the Covid-19 vaccine and hence wanted to be exempted, but that he must ensure the reason stated on the certificate was valid.

“In case some people ask us why an exemption was granted, we need to have an explanation. Some patients were obviously suitable for getting vaccinated, so we couldn’t find any reason to exempt them,” he said.

Public hospital doctor Chan Tsz-tai, who works in an accident and emergency department, said he would not be “too liberal” in offering vaccination exemptions, as people might “flock” to the hospital to seek the document. He added he was wary of making judgements about reasons not to take the vaccines, as they often required specialist knowledge.

“I’m not a heart disease specialist, so a lot of times, we would reject [the exemption request],” he said, adding that fewer people had tried asking for the certificate from the A&E unit in recent months as they knew the chance of receiving one was slim.

As of Monday evening, more than 5.1 million people in Hong Kong have received two doses of Covid-19 vaccines, putting the city’s vaccination rate for two doses at around 76 per cent. Meanwhile, 1,489,987 people have taken their booster shot.

Experiences of failing to acquire a medical exemption certificate have been widely discussed in a Facebook group called Forced to be vaccinated concern group. Founded in August last year, the group currently has around 24,500 members.

Some people who were unwilling to be vaccinated cited side-effects experienced by their friends, saying that the jabs were “dangerous.” Unverified claims that getting a Covid-19 jab may result in death were also posted in the group.

Some posts described choosing not to be inoculated as a “basic human right,” as others criticised those who received Covid-19 vaccines for “kneeling down” to the authorities.

The public group saw discussions about how doctors had become “less willing” or “did not dare” to issue medical exemption certificates, while some people asked others to provide the details of doctors from whom they had successfully obtained an exemption.

General practitioner Chan said that younger patients were more reluctant to get vaccinated owing to the rumours they had heard about the vaccines. She said the government has not done sufficient work to allay concerns and the publicity materials distributed were often “too generalised.”

“If the government pamphlet could list out more rare side effects, the public may trust it more as a factsheet of the vaccines,” she said.

Asked to comment on allegations that doctors were not willing to grant medical exemption owing to “pressure from the authorities,” Chan rejected the claims.

“I think the reason [doctors] did not want to write so many exemption certificates was not because we were pressured by the authorities, but rather there is a medical and social need for people to get vaccinated,” she said, adding that the she believed the issue of vaccination had become “politicised” in the city.

The government has produced a bilingual pamphlet that is currently handed out to people at vaccination centres or clinics. It lists out potential side effects ranging from “very common” – meaning more than one in 10 people would experience it – to “not known,” which cannot be estimated from the available data.

On its official website for Covid-19 vaccination, the government has produced a series of infographics concerning “Covid-19 Vaccines Basic Knowledge,” as well as “Busting Myths about Covid-19 Vaccines.”

Such information may have little effect on people who see politics as a main reason for steering clear from the vaccines. Kindergarten teacher Tiffany Leung is among those who resisted vaccination for months. She recently got her first BioNTech jab after the Education Bureau announced last month that the “vaccine bubble” would be extended to schools.

The 26-year-old told HKFP that she had reservations about the efficacy of the vaccines, and the government campaign to call on the public to get vaccinated only “drove people away.” She said she felt “cornered” into getting injected in light of the administrative measures that would impose different degrees of restrictions on unvaccinated citizens.

“Maybe because I have bias, whenever I see government advertisements [about the vaccines], I think it is such a hard-sell,” the teacher said, adding she often dismissed government publicity work on the vaccines.

Analysis and recommendations from medical experts did little in to assuage her concerns, Leung said, as she saw some of them as “defending the government.”

“Those experts usually gave comments during press conferences, and when I listen, I would not be listening very impartially,” Leung admitted.

The issue of politics playing a role in anti-epidemic work is not limited to Hong Kong, said leading epidemiologist Ben Cowling from the University of Hong Kong (HKU). The head of the Division of Epidemiology and Biostatistics told HKFP that there have been debates over the implementation of vaccine passes around the world over the past year.

The international health body urged governments to consider the necessity and proportionality of a mandate, which it defined as “compelling vaccination by direct or indirect threats of imposing restrictions in cases of non-compliance.” The authorities should seek to rely on public education and other “less coercive” methods over imposing a mandate, it said.

The WHO also cited public trust as a factor of consideration, warning that mandating vaccination may undermine public confidence on the scientific community. It said vaccine hesitancy may not be limited to safety and efficacy concerns, as people’s mistrust of the authorities may be “rooted” in histories of unethical medial and public health policies.

“Efforts should be made to demonstrate the benefit and safety of vaccines for the greatest possible acceptance of vaccination. Stricter regulatory measures should be considered only if these means are not successful,” the WHO wrote.

Cowling said the vaccine pass scheme was intended to “make it very inconvenient” for people who chose not to get vaccinated. It is also useful in preparing for and mitigating a large community outbreak, he said.

However, the HKU professor said the city’s vaccination rate could have been increased months ago with better communication and preparation. The city has seen case loads in the thousands, and treatment and isolation facilities overwhelmed, since the start of the fifth wave in late-December.

“Now we have this fifth wave and there does not seem to have been sufficient preparation for this scenario… there are a lot of consequences of that lack of preparation,” he said.

“If the Covid-19 situation had been anticipated and communicated to the public months ago, then I think the vaccine uptake would have been much higher months ago without the need of a vaccine pass,” he said.