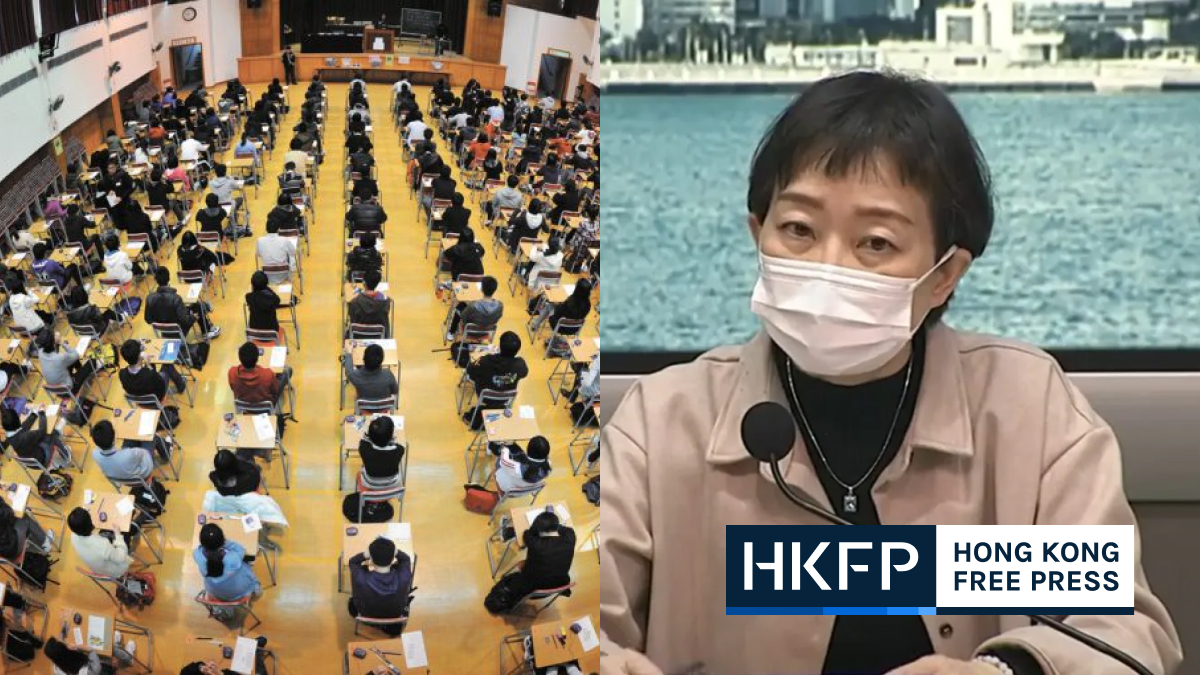 The Hong Kong Examinations and Assessment Authority (HKEAA) has announced that the English oral assessment for the city’s university entrance exams would be cancelled for the third year in a row. The city also reported 115 Covid-19 cases, marking the sixth consecutive day of triple-digit figures, including two clusters linked to secondary schools.

Xiangdong Wei, the Secretary General of the HKEAA, told reporters on Friday afternoon that the main reason for the cancellation was that it was not possible to separate candidates during the English oral exam.

Wei said the scores for the Hong Kong Diploma of Secondary Education (HKDSE) oral exam would be distributed to other sections of the English exam, and that HKEAA research proved there would only be a slight impact on students.

The practical examinations for physical education and music, which were scheduled for mid-February, will be delayed to between late-May and early-June, the HKEAA said.

The Director of Public Examinations at the HKEAA, Ricardo Mak, said other parts of the HKDSE were set to commence as planned on April 22. However, he said that “it is impossible to foresee when the pandemic will come, and how large it will be,” comparing the Covid-19 outbreak to a “tsunami.”

Meanwhile, eight or nine people were infected in another cluster at HKTA The Yuen Yuen Institute No.3 Secondary School in Tseung Kwan O, one of whom was a part-time member of staff. The others were were students, Chuang said.

Chuang said school outbreaks were rare in Hong Kong, and the students had sat separately in classrooms during examinations. “Supposedly they did not interact with each other, but there was still transmission,” she said.

The students also told the CHP that they did not know each other, Chuang added, leading health authorities to suspect that the highly infectious Omicron variant was behind the outbreaks.

Among Friday’s confirmed cases, four were imported and 105 were related to other known cases, while six remained untraceable, Chuang said.

Five of the untraceable cases were suspected to be carrying the Omicron variant, while a 70-year-old retiree who visited a mall at Choi Wan Estate was a possible Delta infection.

The government put Cheung Bor House in Choi Wan (I) Estate under overnight lockdown on Thursday over concerns of a Delta outbreak, but did not find any more positive cases.

When asked whether the CHP would adopt a mitigation approach instead of a containment strategy as there were already multiple transmission chains in the community, Chuang said the current epidemic situation remained “relatively stable” and authorities would continue with containment measures.

“For now, we haven’t seen a sudden sharp increase in the case numbers.” Chuang said, but added that the risk of an exponential outbreak due to the number of untraceable cases remains.

As for residents under lockdown in Ying Kwai House and Ha Kwai House on Kwai Chung Estate, Chuang said they should be allowed to leave their buildings as planned on Saturday morning, “but of course we will look at tonight’s test results.”

To date, there have been 396 positive or preliminary positive cases detected in the Kwai Chung Estate, including 24 cases on Friday, according to Chuang.