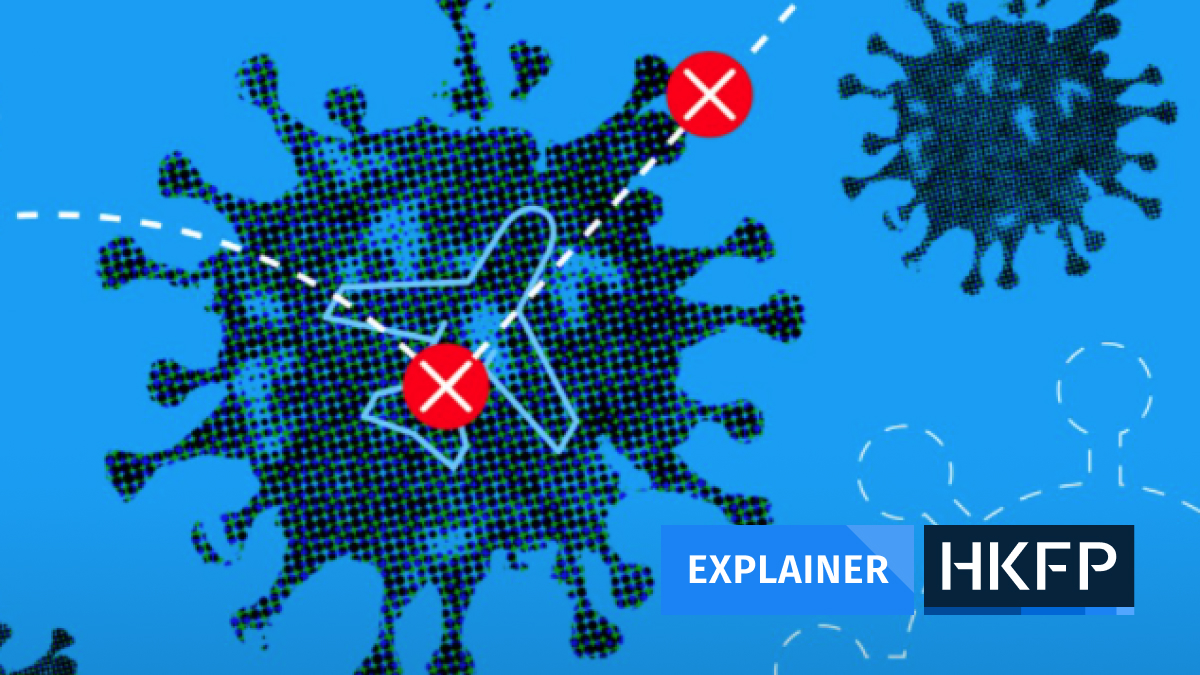 After close to two years of keeping the Covid-19 pandemic under control, Hong Kong’s fifth wave led to over 1.1 million infections and almost 8,000 deaths, with mostly unvaccinated elderly residents falling victim to Omicron.

Hong Kong has stuck with stringent travel restrictions and maintains some of the world’s strictest quarantine requirements. Rules were further tightened in January over the latest outbreak.

As well as growing case loads, the city has also seen an increasing outflow of residents amid frustration with strict social distancing measures. Last week, Chief Executive Carrie Lam acknowledged that the city faces an “inarguable” trend of brain drain.

In six graphs, HKFP explores the impact of the fifth wave on passenger traffic.

While the number of departures has exceeded the number of arrivals since last year, the number of people entering the city has dropped sharply over the past three months. In January, the government banned flights from nine high-risk countries and introduced more stringent social distancing rules.

Since the outbreak of the fifth wave, the city has seen a net outflow of 147,324 Hong Kong residents, meaning that there were more people leaving than entering Hong Kong. Official data shows a significant uptick from the end of January.

The city saw a spike of incoming residents on January 5, after the Centre for Health Protection requested the Royal Caribbean’s Spectrum of the Seas to return a day early, as several close contacts of a Covid-19 patient took part in a “cruise to nowhere” trip. The scheme was also suspended on the same day.

There was a net outflow of 65,295 and 66,334 residents in February and March respectively, while – during the same period last year – there were more citizens entering the city than leaving. The total net outflow of residents from April 1 last year to January 31 this year was 67,286.

The increase in the net outflow of residents in July last year may be linked to students studying overseas leaving the city in preparation for a new school year, while the rise in the number of citizens returning in August could be linked to people coming back for the summer holiday.

Passenger flights from Australia, Canada, France, India, Pakistan, the Philippines, the UK and the US were banned from January 8 with the announcement made on January 5. Nepal was added to the list on February 22.

Following the implementation of flight bans, the number of Hong Kong residents coming into the city via the airport decreased significantly, with fewer than 600 people entering Hong Kong daily in all but 10 days from January 8 until end of March.

The government halted “cruises-to-nowhere” on January 5 following the Spectrum of the Seas incident, with the last trip departing from the Kai Tak Cruise Terminal on January 2.

Shenzhen and Guangzhou, as well as Jilin and Shanghai further north, have since been put under lockdowns, with some Chinese netizens blaming Hong Kong for spreading the infection to other areas of China, which is known for its tough anti-epidemic measures.

However, departure figures show that the percentage of Hong Kong residents leaving via the only two land ports still open – the Hong Kong-Zhuhai-Macao Bridge and Shenzhen Bay – has decreased since mid February.

In response to the criticism from mainland Chinese social media users, leader Carrie Lam told Hong Kong citizens on March 17 to “not watch, not listen, and not believe in” the opinion and speculation online.

The government tightened social distancing restrictions and announced flight bans a week into the fifth Covid-19 outbreak on January 5. On February 22, Lam announced plans to conduct compulsory universal testing, a strategy that was later suspended in March.

However, by looking at departure figures, there were no clear patterns as to how the policy announcements may be linked to the number of Hong Kong residents leaving the city.

From April 1, flight bans have been lifted and the the compulsory quarantine period for fully vaccinated residents arriving in the city has been reduced to seven days.

The city saw close to 2,000 residents arriving at the airport on the first day bans were lifted, with a considerable increase in arrivals in days that followed, when compared with the week before.

When asked about the exodus of talent, Lam said last Wednesday that it was “an indisputable fact,” but that it should not be considered as a sign of emigration.

“Media often see the net outflow number as the amount of emigration [occurring] – this is actually not accurate,” Lam said.

“I still believe that Hong Kong is a place full of talent, but the nature of talent is fluid, today they’re here, tomorrow they can go to another place, and then come back afterwards. That’s why the most important thing is that Hong Kong remains attractive, and is capable of continuing to attract talent.”