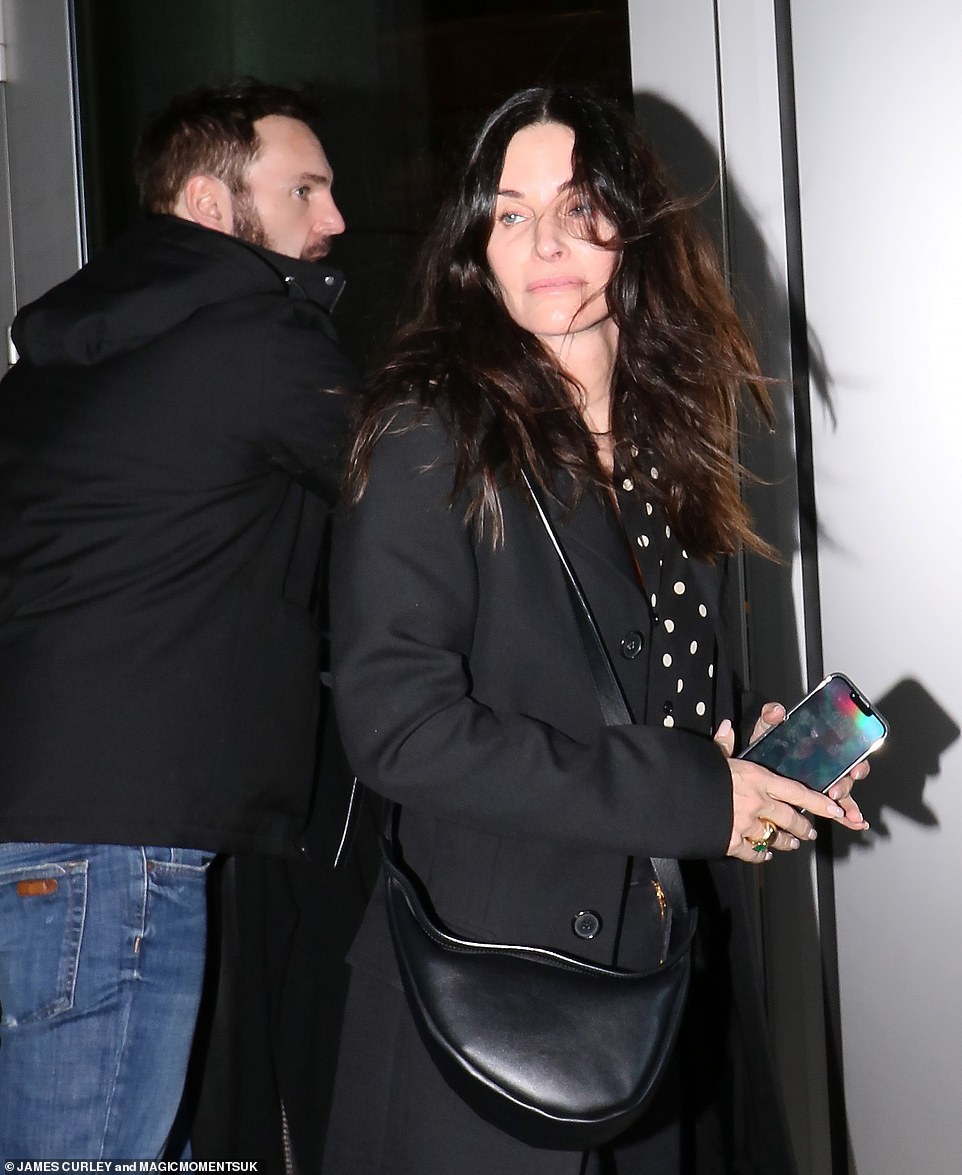 It’s the biggest night in the British music calendar.

So the stars ensured they went all out as they partied the night away following the 2022 BRIT Awards in London on Tuesday.

The likes of Courteney Cox, Becky Hill and Laura Whitmore led the hordes of partygoers heading home from various afterparties in the early hours after toasting another successful awards show.

Let the good times roll: It’s the biggest night in the British music calendar. So the stars ensured they went all out as they partied the night away following the 2022 BRIT Awards in London on Tuesday, with Courteney Cox and her husband Johnny McDaid among the partygoers

Party time: The likes of Becky Hill and Laura Whitmore led the hordes of partygoers heading home from various afterparties in the early hours after toasting another successful awards show

Courteney, 57, seemed in high spirits as she left the O2 Arena alongside boyfriend Johnny McDaid after the pair took to the stage during the ceremony to present an award.

The actress wrapped up warm as she draped a jacket over her black silk long-sleeved shirt that she had paired with a matching skirt.

Meanwhile, Becky, 27, was clearly in the mood to celebrate after she scooped her first BRIT Award for for Best Dance Act.

The Lose Control singer was seen puffing on a cigarette as she staggered into the back of a taxi alongside her friends – who put on a very raucous display for the cameras – with one pal even tugging down her dress to show off her assets.

Taking it easy: The Lose Control singer was seen puffing on a cigarette as she staggered into the back of a taxi

Fun times: Becky and her friends put on a very raucous display for the cameras as they laughed and chatted on their way to another bash

Crikey: One of Becky’s pal was even seen tugging down her dress to show off her assets after their boozy celebrations

Becky wowed in a sequin emerald mini dress which showed off her toned and tanned pins and featured stunning embellishment with glittery and chiffon sections.

While she seemed rather worse for wear as she left the O2, Becky wasn’t ready to call it a night just yet, later changing into a white sequin mini dress with a feathered hem as she headed to another bash at The Box nightclub.

Laura Whitmore appeared all partied out as she staggered out of the venue with her husband Iain Stirling’s jacket draped over her.

A night to remember: She was joined on the evening by her husband Iain, with the duo catching a taxi home together

The Love Island host, 36, cut a glamorous figure in a black velvet mini dress, which featured a cut out section across her midriff and bejewelled detailing all over.

The thigh-grazing style highlighted her long toned legs, which she further elongated with a pair of towering black strappy heels.

She was joined on the evening by her husband Iain, with the duo catching a taxi home together.

Loving life: Also living it up on the night was The Saturdays star Mollie, who put on a very animated display as she bounded out of the O2 Arena alongside her pals after a night of partying

All aboard the party bus! Mollie was seen heading out of the venue on a London tour bus that picked up partygoers

Say cheese! Raye wowed in an amber thigh-split gown as she joined her pals on the party bus

Animated: Raye grabbed hold of her pal as she strutted her stuff outside the O2 Arena

Also living it up on the night was The Saturdays star Mollie, who put on a very animated display as she bounded out of the O2 Arena alongside her pals after a night of partying.

The singer, 34, was unmissable as she dazzled in a bright yellow halter neck dress with key hole detail and bows on the front.

Adding even more colour to the look, she donned a colourful Aztec coat and toted a hot pink clutch bag.

Wild night: Bleary-eyed Emily Atack clambered into the back of a taxi with Strictly’s Graziano Di Prima, Vick Hope and Donna Preston as she left the raucous BRITs O2 afterparty

On the move: The actress, 32, was in high spirits as she sidled up to Strictly Come Dancing professional Graziano after clambering into the back of a black taxi

Looking good: Emily looked sensational as she hit the red carpet earlier in the night, posing in a floor-length black gown

‘Can’t wear this because of my chunky bum!’: Emily showed off her curves in a figure-hugging embroidered gown during a BRITS fitting on Sunday

Emily Atack also looked in high spirits as she left the O2 afterparty and sidled up to Strictly Come Dancing professional Graziano Di Prima after clambering into the back of a black taxi.

The pair were joined by pals including Vick Hope and Donna Preston as they headed home after a wild night of partying.

Emily looked sensational as she hit the red carpet earlier in the night, posing in a floor-length black gown.

Keeping hydrated: Griff wasn’t ready to stop the party as she sat in the back of her taxi with a large glass of wine

Showing off the sparkly dress in all it’s glory, the actress posed up a storm as she headed into the venue.

Her plunging outfit showed off her ample cleavage and clung to her incredible curves, as it glittered under the lights.

Her blonde locks were styled in loose waves, and she wore a full face of glamorous makeup to accentuate her pretty features.

Low-key look: The Crown star Emma Corrin kept things very casual in a navy Adidas tracksuit and chunky loafers as she left the afterparty at Shoreditch House with her pals

It comes after Emily showed her fans a sneak peak into her dress fitting for the awards ceremony on Sunday.

Slipping her figure into an embroidered Stella McCartney gown, she told her Instagram fanbase that the gown would not be making an appearance during Tuesday night’s ceremony, ‘because of my chunky bum’.

The snap’s caption read: ‘Had a fitting for the Brits and sadly can’t wear this because of my chunky bum but wanted to show it off @stellamccartney @frontrowlondon (Soz for messy bedroom [sic])’.

It was a huge night for music at the Brit Awards on Tuesday evening – with Adele taking home three gongs at the O2 Arena, including the first ever genderless Artist Of The Year award after the male and female categories were scrapped.

The Easy On Me singer, 33, also won the award for Song Of The Year and the coveted Album Of The Year after being nominated for four gongs along with Ed Sheeran, who gave two performances on the night.

The ceremony kicked off at 8pm on ITV and was presented by Mo Gilligan for the first time, with Maya Jama hosting the red carpet.

The show got off to a bang with a spectacular theatrical performance from Ed with a new version of Bad Habits, for which he was joined by special guests Bring Me The Horizon.

With medleys and music legends at the heart of the BRITs on-stage performances, Anne-Marie – who fell over during her performance – and KSI along with Digital Farm Animals delivered a show-stopping three song set whilst rock royalty Liam Gallagher braved a helicopter to the O2 arena to perform his new single Everything’s Electric.

The 2022 BRIT Awards was truly Adele’s night and she performed a stripped-back version of her power-ballad I Drink Wine before winning three awards, bringing her complete tally of BRIT trophies to 12 since winning the first ever Rising Star award in 2008.

Adele was presented with the prestigious Mastercard Album of the Year for the third time, having won for her previous two albums in 2012 and 2016 – the only solo artist in BRITs history to have won this award three times.

The songstress also became the first ever recipient of the BRITs’ inaugural Artist of the Year award, with her third victory claimed with the win for Song of the Year for Easy On Me.

The International counterparts to these new categories similarly saw two unbeatable global artists celebrated; with Billie Eilish picking up International Artist of the Year and Olivia Rodrigo presented with International Song of the Year for Good 4 U – the biggest selling international single of the year in the UK.

Making her BRITs debut both on stage with an electrifying two-song performance, and in this year’s shortlists, Little Simz was presented with Best New Artist, beating off competition from Central Cee, Griff, Joy Crookes and Self Esteem.

She was joined on stage by actress Emma Corrin. The Mercury Prize winning London band Wolf Alice won Best Group, the second year they had been nominated in this category.

The 2022 BRITs Rising Star shortlist saw three incredible female artists compete for the coveted prize, as chosen by critics and heads of music to identify the future stars of British music.

Winner Holly Humberstone got to perform to her biggest audience yet with a rendition of her new single London is Lonely, and was introduced on stage by last year’s Rising Star recipient, Griff.

The BRITs in 2022 saw a number of changes to awards categories in order to create even more opportunities for artists to be recognised.

The recipient of the BRITs’ first ever Songwriter of the Year award tonight went to Ed Sheeran before he performed a second number, The Joker and The Queen later in the show.

Pour it up: Wolf Alice celebrated their Group Of The Year award by toting a bottle of champagne

Having picked up two awards last year, Dua Lipa, was awarded with Pop/R&B Act, and having received her first ever BRIT nominations this year Becky Hill was awarded Dance Act.

Alternative/Rock Act went to Sam Fender (bringing his UK record label Polydor’s tally of trophies up to 5), who later in the show went on to wow the audience with a performance of his Top Ten hit single Seventeen Going Under.

British rap royalty Dave was presented with the award for Hip Hop/Grime/Rap Act by Arsenal legends Ian Wright and Bukayo Saka, and closed the ceremony with a triumphant performance of In The Fire, where he was joined by fellow rappers Ghetts, Giggs, Fredo, Konyikeh and Meekz.

ARTIST OF THE YEAR

SONG OF THE YEAR

Adele – Easy On Me – WINNER

Central Cee – Obsessed With You

MASTERCARD ALBUM OF THE YEAR

Dave – We’re All Alone In This Together

The War On Drugs

Billie Eilish – Happier Than Ever

Lil Nas X – Montero (Call Me By Your Name)

Maneskin – I Wanna Be Your Slave

The Weeknd – Save Your Tears

PRODUCER OF THE YEAR

SONGWRITER OF THE YEAR