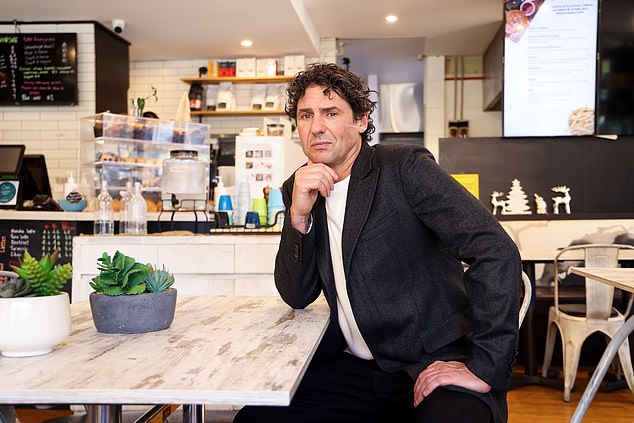 Colin Fassnidge has issued an ominous warning to the state of Australia’s restaurant industry, saying the country has a “bad reputation” internationally.

The Dublin-born chef, 48, who owns a restaurant at the Banksia Hotel in Sydney, says it’s a “tough time” to be in the restaurant business due to “rising prices” and hostile policies towards immigrants.

Speaking to Samantha Armytage on her podcast Something to Talk About, the My Kitchen Rules judge explained: “Everyone was cooking in [Covid] lockdown. We even started an online cooking company, which really took off.’

Colin Fassnidge (pictured) has issued an ominous warning about the state of Australia’s restaurant industry, saying the country has a “bad reputation” internationally.

“So people were very interested in how to cook, what ingredients and how to source them,” he continued.

“I just opened a business in town, and it’s packed. But we’re looking at the price of food going up.

‘The cost of oil for our fryers and butter is going up. Everything is so expensive now. We therefore pass this increase on to our customers.

“I don’t know what the next six months will be like, but it’s not looking good.”

The Dublin-born chef, 48, who owns a restaurant at the Banksia Hotel in Sydney, says it’s a “tough time” to be in the restaurant business due to “rising prices” and hostile policies towards immigrants. (Pictured with Manu Feildel and Pete Evans in a promo photo for My Kitchen Rules)

Fassnidge also spoke about the staff shortage that is gripping many industries across Australia.

He put the blame for the lack of workers entirely on former Prime Minister Scott Morrison, who kicked out many temporary visa holders during the pandemic.

“Shout out to ScoMo: all the staff from all over the world, who had visas, who paid taxes like everyone else – when the pandemic hit, he kicked them out and they’re not coming back,” he said.

“Australia now has a bad name.”

Fassnidge also noted that there is a “huge market” for home cooking after Covid and that people are “tired of cooking”.

Colin, who will take over as host of Kitchen Nightmares Australia next season, added that Australians are ‘extremely spoiled’ when it comes to food, and that it ‘comes back to bite’ [the restaurant industry] in the ass’.

“A lettuce is now $11, and the price of meat has gone through the roof. You can’t eat fillet steak unless you make a million dollars a year. Even fish is expensive,’ he said.

“Everything goes up, with drought, with floods. If you don’t eat nose to tail, you’re wasting the animal. You have to eat everything.

‘We have to look for other ways to eat less meat and more vegetables. Or it becomes too expensive for families to eat.’

Fassnidge, 48, tries to save failing restaurants and lead them to success

Despite his success as a television personality and chef, he admitted that he even worried about how he would pay his mortgage during the pandemic.

The show follows the Irish celebrity chef as he tries to save failing restaurants and lead them to success.