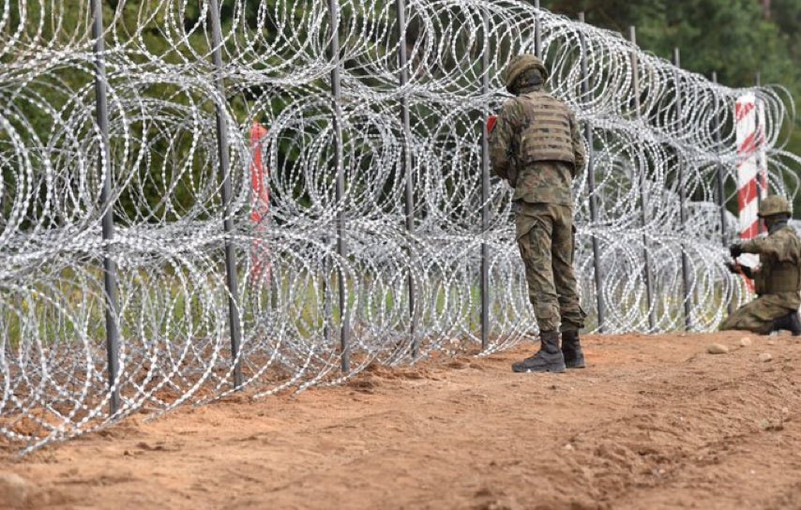 In the aftermath of clashes last year at the Belarus-Poland border, 1,500 migrants remain stranded at detention centres inside Poland that rights experts say are not fit-for-purpose.

“Children and families with children, women…victims of torture, shouldn’t be sent to such places,” said Machińska.

Machińska said at least 400 children and 290 women are locked up in guarded detention centres and that some are denied even basic aid. Media and humanitarian access is limited to non-existent, she said.

Last December, a riot broke out at a detention centre inside a Polish military training camp near the town of Wędrzyn, located some 50km from the German border.

The facility housed 600 asylum seekers, squeezed 24 to a room – with only around two square metres of space per person, she said.

“Wędrzyn should disappear from the Polish map. It is the worst place,” said Machińska.

“Many of them were victims of victims of torture, [with] very limited access to medical assistance, the situation inside of this place was really horrible,” she said.

Machińska described the discussion with MEPs as “extremely important” and part of wider efforts to raise awareness – and to lift the ban on media and rights workers and even legislators from visiting the detention centres, and the so-called exclusion zones along the land border with Belarus.

Polish liberal MEP Róża Thun Und Hohenstein said during the session that she had been denied access to the border zone three times.

“I also tried to get the permission to go to one of those centres and see what’s going on. I was refused,” she said.

The poor treatment also poses deeper questions about Poland’s capacity to handle a refugee exodus from Ukraine should Russia launch a full-scale invasion.

Deputy interior minister Maciej Wąsik told Polish radio in late January that at least a million could arrive from Ukraine in the event of a war.

Wąsik cited Poland’s obligations under the Geneva Convention, and also said it was a Christian duty to help potential refugees from Ukraine.

But years of leadership under the ruling nationalist Law and Justice party suggests there is an ongoing and concerted policy to clamp down on the right to asylum.

A 2020 judgement from the European Court of Human Rights condemned Polish pushbacks of 13 Russian asylum seekers, including minors, in a case dating from 2017.

And last year, Warsaw formalised the practice of pushbacks of prospective asylum seekers along its border with Belarus, after the Minsk regime was accused of luring thousands of arrivals from Iraq and elsewhere to cross into Poland, Latvia and Lithuania.

At least 21 people have died since August last year, according to the ​​International Organization for Migration. Among the dead was an unborn baby and her mother, said Machińska.

The measures were roundly condemned by rights groups as they increased the detention period of asylum seekers to 16 weeks, up from the current EU-wide maximum of four weeks.

But even those more flexible rules and longer detention periods have not appeased Poland, which in an internal EU document from 28 January , suggests Warsaw would rather have the right-to-asylum suspended.

Poland has since blocked a proposed compromise on the commission’s December proposals – as it instead moves forward with the construction of a 186km border wall to the tune of €353m.

Environmental groups say the wall would have a devastating impact on the Białowieża nature reserve, one of Europe’s last remaining primeval forests.