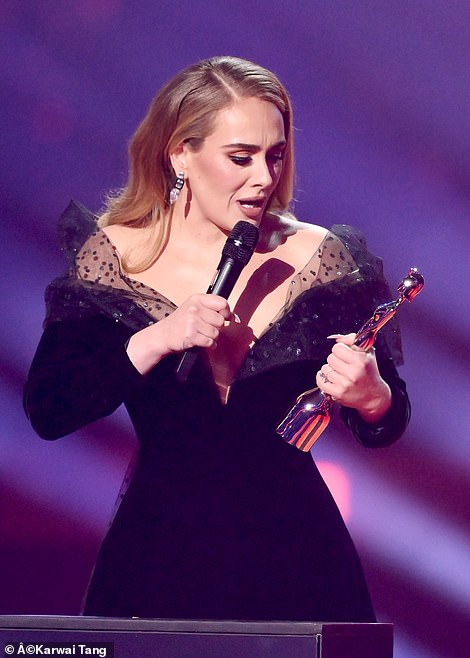 Adele has bagged the first award of the night at the Brit Awards 2022 and took home the Best Song award after facing some tough competition on Tuesday evening.

The singer, 33, declared that she ‘couldn’t believe’ her ‘piano ballad beat a host of bangers’ as she collected the gong and told the audience at the 02 Arena that she ‘loves coming home’ to London.

Adele’s appearance in her hometown comes as she continues to face backlash for leaving fans thousands of pounds out of pocket when she pulled the plug on her Las Vegas residency shows with just 24 hours notice.

Host Mo Gilligan kicked off the show by planning his entrance to the show, which saw him mulling over a James Bond style arrival to the stage either by lifting Tower Bridge or arriving in a flashy sports car.

Wow! Adele has bagged the first award of the night at the Brit Awards 2022 and took home the Best Song award after facing some tough competition on Tuesday evening

Executives dismissed his proposal in favour of reducing carbon emissions but Mo was told he could still bring his mandem and arrived in a troop of BMXs.

He welcomed everyone to the O2 Arena and Ed Sheeran opened the show with his No.1 single Bad Habits. Ed brought an unexpected duet to the evening as Bring Me The Horizon joined him for a remix of his hit.

The rock version of the track featured an explosive performance from Ed and the band, with a troupe of backing dancers and incredible aerial artists.

Welcoming celebrities and viewers alike to the cereony, Mo said: ‘Welcome to the 02 Arena for the biggest night in British music. We’ve got Dave, Sam Fender, Lil Simz, Adele, just to name a few.

Referencing the Brits decision to scrap gendered cateogorites this year, Mosaid: ‘There’s no gender to the awards, everyone thought it was great apart from the male artists who realised they were now up against Adele.’

Hosting the show! Host Mo Gilligan kicked off the show by planning his entrance to the show, which saw him mulling over a James Bond style arrival to the stage either by lifting Tower Bridge or arriving in a flashy sports car

Smash hit: He welcomed everyone to the O2 Arena and Ed Sheeran opened the show with his No.1 single Bad Habits. Ed brought an unexpected duet to the evening as Bring Me The Horizon joined him for a remix of his hit

Elsewhere, preseenter Maya Jama was on backstage duties as she read out the cocktails on offer. She said: ‘Man like mojito, cos-mo-politian… I’m basically responsible for every artist getting bladdered.’

Ted Lasso actors Hannah Waddington and Brett Goldstein were the first celebrity presenters, who read the nominees for Best Song, soon honoured Mo’s words as Adele’s Easy On Me bagged the award.

In a short but sweet speech, Adele said: ‘Thank you so much! I didn’t realise that was that many nomiees. I can’t belive a piano ballad won against all those bangers. I love coming home and the Brits is such a big part of my career. Way back from when I was little.’

Courtney Cox and Johnny McDaid were on hand to present the next award, Best International Artist.

The Friends star said: ‘We are here to present the award for the International Song Of The Year’, with nominees including Billie Ellish, Doja Cat and Drake, but Olivia Rodrigo’s Good For You took the win.

Following the award, Anne-Marie and KSI took to the stage for a joint performance, however their routine got off to an award start when the singer stumbled and almost tripped over at the start.

Anne-Marie quickly recovered and wowed the audience with a stunning performance.

Next up, Best Pop and R&B was awarded to Dua Lipa, who was unable to attend due to a performance in Miami but she has sent a message thanking her team and fans following the win.

Mixing it up! The unexpected duet set the arena alight

During a night of unexpected duets, Little Simz took to the next stage to perform. However part way through she was joined by British actress Emma Corrin, who played Diana in The Crown.

Emma,  26, had a spoken word section during Little Simz performance.

The icon thanked the groups and artists for ‘keeping the rock tradition alive’, before announcing that his ‘favourite’ Sam Fender was the winner in the category.

Adele – who has been hiding out at boyfriend Rich Paul’s Los Angeles home in recent weeks – touched down at Heathrow over the weekend and was seen making her way into the airport’s Windsor Suite.

A source at the Vegas rehearsals previously told Page Six late that the singer often made sobbing calls to her boyfriend that interrupted practice.

The source, who was connected to the Caesars Palace management team, said: ‘Adele’s been crying and couldn’t get through a single full rehearsal for the past month.

‘Just constantly on the phone with Rich… loudly shouting and sobbing. She has barely rehearsed because she is constantly in the middle of an emotional shootout.’

Hello! Welcoming celebrities and viewers alike to the cereony, Mo said: ‘Welcome to the 02 Arena for the biggest night in British music. We’ve got Dave, Sam Fender, Lil Simz, Adele, just to name a few’

The two were also rumored to be experiencing a rough patch in their relationship of six months, but Adele tried to squash it on social media last week.

She confirmed that she would be performing at the upcoming BRITs, and added at the end of her post, ‘Oh, and Rich sends his love’, appearing to dismiss any claims of strife.

Following her Brits performance, Adele is scheduled to appear on The Graham Norton Show on Friday night amid claims she wants to make her career ‘more about the music’.

The Mail on Sunday reported that she plans to ‘go back to basics’ after a high-profile PR campaign to promote her album, 30, including two TV specials.

It’s set to be a big night for British music, with Adele and Ed Sheeran leading the 2022 BRIT Awards nominations, with an impressive four nods each.

Joining Adele and Ed with four nominations are Little Simz and Dave, who along with Sam Fender, will battle it out for the inaugural Artist of the Year award at the ceremony which airs at 8pm on ITV and will be hosted by Mo Gilligan for the first time.

The ceremony, in association with Mastercard, sees the most female artists nominated in over a decade, however, they are still outnumbered three to two by male nominees.

It comes after The Brit Awards sparked controversy after scrapping male and female categories and switching to gender-neutral gongs for the first time in its history, causing naysayers to brand the event ‘woke’.

Sam Fender, Central Cee, David Guetta are up for three awards on the night, while Doja Cat, Olivia Rodrigo, Billie Eilish, Lil Nas X are each nominated for two prizes and will go up against Taylor Swift for International Artist of the Year award.

Little Mix’s nomination comes weeks after the girls decided to take an extended break to concentrate on solo efforts, with their nods being the first time they’ve been nominated as a trio since Jesy Nelson quit last December.

They’ll be hoping to emulate their success from last year, where they won Best Group for the first time and also became the first ever female group to do so.

Other artists hoping to win big on the night include ABBA, AJ Tracey, Anne-Marie, Drake, Elton John, Ghetts, London Grammar and The Weeknd.

Organisers divided opinion last year with some outraged by the decision to switch to gender-neutral gongs for the first time in its history.

Bosses claimed the move was in a bid ‘to be as inclusive and as relevant as possible’ and allowed people to enter who do not identify as a man or woman. But fans blasted the change as ‘woke drivel’, with many calling for a boycott of next year’s show.

Meanwhile, the song of the year prize will recognise the featured artists, rather than just the lead artists or named collaborators.

These four new genre awards were up for a public vote on the Tik Tok app, as for the first time in the ceremony’s 45-year history, fans got to decide the outcome. The vote closed at 6pm GMT Thursday February 3, with users able to cast up to ten votes per category, per day.

The changes come after singer Sam Smith – who identifies as non-binary – put organisers under pressure to scrap male and female categories earlier this year.

Doja Cat had also been on the lineup, but was forced to pull out after several members of her crew tested positive for Covid.

She tweeted last week: ‘Unfortunately, due to cases of COVID within my crew, I will no longer be performing at the Brits. ‘It’s simply not safe for us to continue to rehearse together and put each other in harm’s way. I can’t wait to perform for my UK fans as soon as I can. Take care of yourselves.’

The rap star – who received nods for International Artist Of The Year and Best International Song for her SZA collaboration Kiss Me More – herself tested positive for the virus in December.

ARTIST OF THE YEAR

SONG OF THE YEAR

Adele – Easy On Me

Central Cee – Obsessed With You

MASTERCARD ALBUM OF THE YEAR

Dave – We’re All Alone In This Together

The War On Drugs

Billie Eilish – Happier Than Ever

Lil Nas X – Montero (Call Me By Your Name)

Maneskin – I Wanna Be Your Slave

The Weeknd – Save Your Tears

PRODUCER OF THE YEAR

SONGWRITER OF THE YEAR