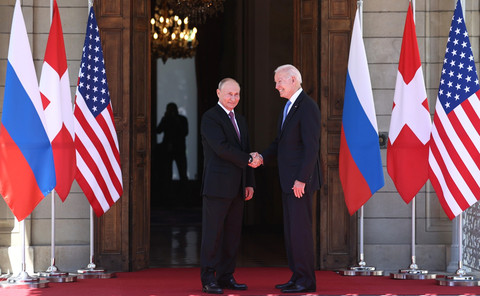 US and Russian leaders have repeated their red lines on Ukraine ahead of New Year talks designed to prevent a new war in Europe.

The 50-minute long phone call on Thursday (30 December) saw US president Joe Biden warn that a new Russian invasion of Ukraine would lead to “economic costs … [and] adjustments and augmentations of Nato force posture in allied countries, [as well as] … additional assistance to Ukraine to enable it to further defend itself and its territory”, a White House official said.

And new Western sanctions would cause a “complete rupture of Russian-American relations”, he added.

“Our president also mentioned that it [new sanctions] would be a mistake that our descendants would see as a huge error,” Putin’s top foreign policy aide, Yury Ushakov, also said in Moscow.

“This was not some mere pleasantries. This was a serious, substantive conversation,” the US official noted.

“The presidents agreed to keep under personal control the course of discussions” and to “continue regular contacts”, the Kremlin said.

But Biden was “more interested in actions and indicators, not words, at this point. So we’re going to continue to monitor very closely the movement and build-up of Russian forces on the Ukraine border and prepare ourselves for whatever decision ultimately is made by the Russian president,” the US official said.

And the US recently deployed its high-end JSTARS military surveillance plane in Ukrainian airspace to keep an eye on Russian troop movements, it has said.

International monitors from the Organisation for Security and Cooperation in Europe (OSCE) noted just 11 ceasefire violations on the Donbas contact line in recent days, compared to hundreds earlier in December.

But Putin has continued to mass forces on Ukraine’s borders, while Russian diplomats spoke of Ukraine’s imputed plans to “massacre the civilians of Donbas [in Russia-occupied eastern Ukraine] using Nato weapons” in what sounded like a potential pretext for war.

The next talks will take place between US deputy secretary of state Wendy Sherman and Russian deputy foreign minister Sergei Ryabkov in Geneva on 9 and 10 January.

And US officials told the New York Times that if Putin was to invade Ukraine a second time, he would do it in the coming weeks, because winter thaws in March would make it hard for Russian tanks to roll into Ukraine in Spring.

For his part, Biden also underlined that he would not make any deals on European security over the heads of EU countries.

“President Biden was very clear that the United States will be operating on the principle of ‘nothing about you without you’ … which president Putin said that he understood,” the US official noted.

But both the US and Russia appeared to see little role for the EU foreign service or for eastern European states in the process.

The US spoke of consultations with “leaders across Europe”, but highlighted those in the “G7” and “European Quad” diplomatic clubs – referring to Germany, France, Italy, and the UK.

The Russian foreign ministry’s spokeswoman, Maria Zakharova, said there was no place for EU foreign relations chief Josep Borrell at the negotiating table.

“The claim by Mr. Borrell on some hypothetical contribution by the EU to the discussion on security guarantees in Europe looks very strange,” she said on Thursday.

“Possibly, the EU diplomacy head has simply forgotten that for the EU countries – and 21 of them are Nato members – it is the alliance that now remains ‘the foundation of their collective defence and the forum for its implementation’,” she noted.

And she lambasted Borrell’s role so far as being “in charge [of] mass-producing” statements of a “peculiar” nature on Russia.

But this kind of talk was, in reality, designed to “provoke [EU] decision-makers to try to prove the EU matters” by involving EU institutions, an EU diplomat told EUobserver.

“The Russians want the EU foreign service involved because they know that would lead to more chaos and cacophony on the Western side,” he said.

“They know the EU is more pro-Russian than Nato or even the OSCE and that Borrell and his entourage would actually support the Russian point of view,” he added.