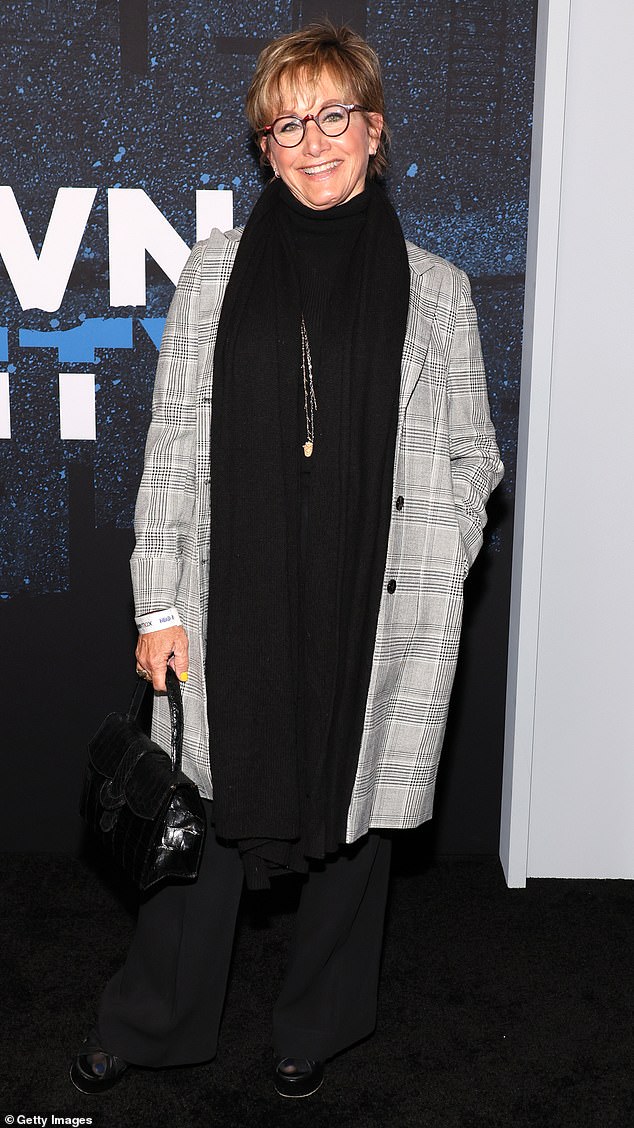 Gabrielle Carteris has been largely focused on promoting her two new projects: neo-Western film Boon and, more recently, the miniseries We Own This City.

And on Thursday, four days before the six-episode series debuts on HBO, the actress attended the New York premiere at the Times Center in Midtown Manhattan.

The former Beverly Hills, 90210 star has a recurring role on the show, playing Andrea Smith, the head of the Organized Crime Drug Enforcement Task Force.

New film: Gabrielle Carteris, 61, attended the premiere of the film We Own This City at the Times Center in New York on Thursday

Carteris, 61, would start her night with a red carpet stop that included several of her cast members.

On this chilly night, the Arizona native strutted in front of photographers in black pants, a top and a matching scarf wrapped around her neck.

She added color and more warmth to the ensemble by wearing a black and white checkered jacket that resembled a long blazer or a cropped overcoat that fell to her knees.

Her overall look was completed with a pair of black shoes, a sleek handbag, and her dirty blonde locks styled to her shoulders in the back with a small part on the left.

Law enforcement: The Beverly Hills, 90210 alum plays the head of the organized crime drug enforcement task force in We Own This City

Lead role: Jon Bernthal, 45, walked the red carpet in a blue pinstripe suit with a white shirt and brown shoes

Breakthrough: Jon Bernthal is best known to many fans for his role in The Walking Dead

A number of actors were on hand for the premiere of the event, including the main man, Bernthal, who looked dapper in a blue pinstripe suit with a white shirt.

Some of the film and TV actors who strutted down the red carpet included SMILF star Celeste Oliva, Leah Pressman, heavily pregnant Margarita Levieva and Orange Is The New Black alum Alysia Reiner.

The Premise: The miniseries details the rise and fall of the Baltimore Police Department’s Gun Trail Task Force and the corruption that surrounds it; Green is seen with Bernthal

Making his mark: Green, 40, is also known for his work as director of the film King Richard

The miniseries details the rise and fall of the Baltimore Police Department’s Gun Trail Task Force and the corruption that surrounds it.

Two days earlier, and still in promo mode, Carteris took to Instagram and posted a photo of herself standing by a pool wearing a promotional We Own This City jacket.

‘Proud to be part of @WeOwnThisCity. An incredible cast and crew! #grateful airing soon on #HBO,’ she said in the caption.

Carteris, who is best known for playing Andrea Zuckerman on the hit 1990w series Beverly Hills, 90210 and the more recent reboot BH90210, has also been pushing her new movie, Boon.

Colorful: Actress Leah Pressman, 30, opted for an elegant dress that included a white bow tie in the chest area and a yellow skirt part

Glowing: Pregnant Margarita Levieva, 42, who starred in two Allegiance and Vanished series. stepped out in an all black ensemble

Unique: Orange Is The New Black alum Alysia Reiner, 51, showed off her unique style in a floral ensemble that included a sheer top and white ankle boots

Outside: Maggie Gyllenhaal, 44, was seen at the New York premiere wearing a black coat over a multicolored dress

Upbeat: The Oscar-nominated actress and writer combed her brown hair on spring weeknight in the city

The neo-Western film hit theaters on April 1 and is also available on demand and digital.

Promo mode: The actress also took to social media to promote We Own This City

Another new role: Carteris also promoted the neo-Western film, Boon, which hits theaters on April 1, and is also available on demand and digital