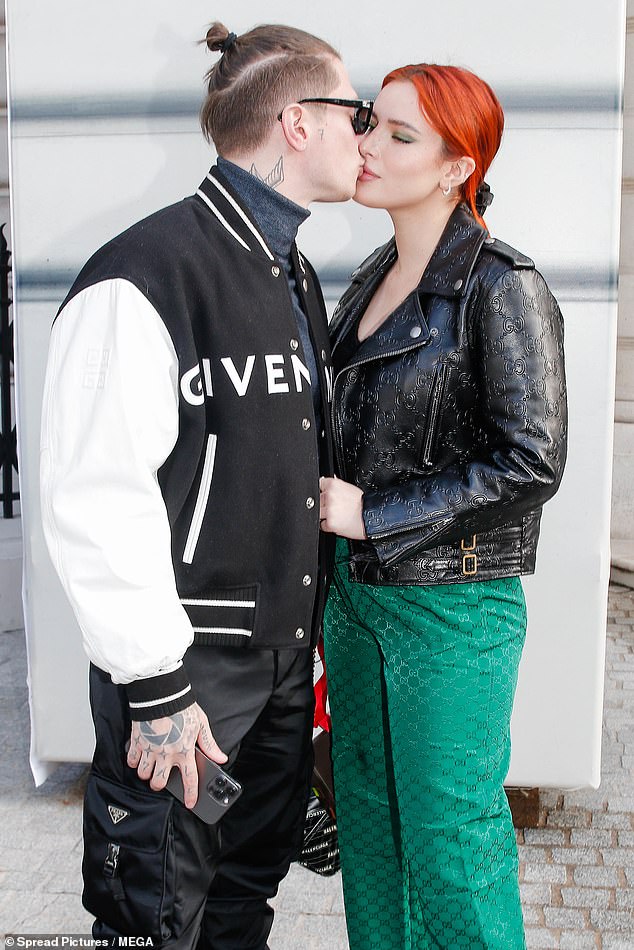 Bella Thorne and her fiancé Benjamin Mascolo looked in love as they ventured out to Paris on Valentine’s Day on Monday.

The Hollywood couple shared a passionate kiss on the street after leaving their hotel in the French capital ahead of a romantic stroll.

Bella, 24, stood out from the crowd with her flame-colored locks, which she swept back into a ponytail.

Close: Bella Thorne and fiancé Benjamin Mascolo looked smitten as they ventured into Paris on Valentine’s Day on Monday

She wore eye-catching green silk trousers adorned with the Gucci logo, which she paired with a black t-shirt.

Keeping the chill at bay, she wrapped up in a fashionable black leather jacket that was also embossed with the famous GG initials.

She raised her waist in a pair of black designer heels and carried a Balenciaga handbag.

Make way: The Hollywood couple left their hotel in the French capital before a romantic walk

He completed his bride-to-be by also tying her hair in a bun.

The romantic trip comes after Bella has been busy planning her wedding with her fiancé.

Looking good: Bella stood out from the crowd with her signature flame-colored locks, which she swept back into a ponytail

Don’t bother us: The pair were seen idling at traffic lights during a shopping spree in Paris

She revealed that she wanted the entire cast of the Disney Channel series Shake It Up – including her co-star Zendaya – to see her walking down the aisle.

There are so many really special people that I’ve spent so much time with over such a long period of years that have been… very impressionable years, I was with people, so I’m sure we let’s all get out.

Optimistic: Bella and Benjamin seemed to be in good spirits on their last outing

“Everyone has to come and tell what’s going on.”

Bella and Benjamin announced their engagement in March.

And the beloved couple – who started dating in April 2019 – are actually planning to have two weddings – one on either side of the Atlantic Ocean.

Speaking about their plans, Benjamin explained, “We are already working on it, because big weddings take a long time to organize.

‘What we can say is that we want to do two. We want to do one in the United States, in Los Angeles and one in Italy. And it will probably be Lake Como because we love Lake Como.

However, Benjamin insisted they were in no rush to get married. He said, “It’s going to be…we think it would be next year, next summer.” We hope between June, July, August.

“The truth is, we have so much work to do that we want to find time to enjoy the wedding.” We don’t want to rush.

Lots to organize: The romantic trip comes after Bella has been busy planning her wedding with her fiancé