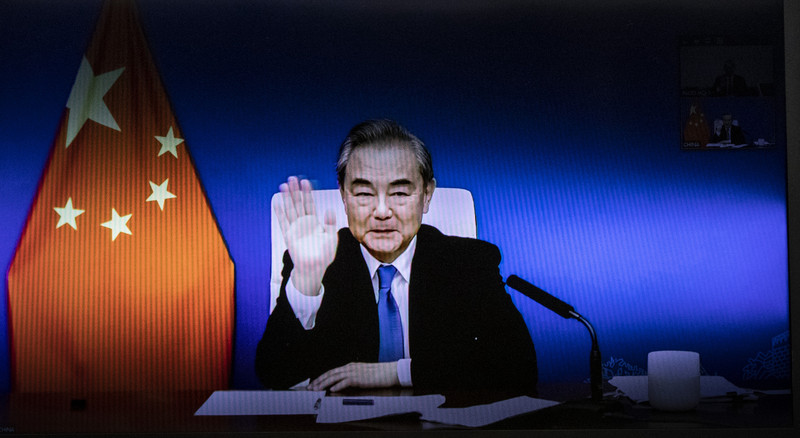 China has redoubled its political support for Russia’s war in Ukraine, auguring badly for EU efforts to break their new axis.

Mounting evidence of war crimes and killing of civilians by Russian forces in Ukraine had done nothing to stop Russia and China from taking their relations “to a higher level in a new era,” Chinese foreign minister Wang Yi said Wednesday (30 March) after meeting his Russian counterpart Sergei Lavrov in China.

“Both sides are more determined to develop bilateral ties,” Wang said after what was the first high-level China-Russia meeting since the Russian invasion in February.

Wang didn’t utter a word of criticism on Russia. Instead, he thanked Moscow for trying to “prevent a large-scale humanitarian crisis” in Ukraine in what amounted to world-turned-upside-down propaganda.

The EU and US have imposed severe economic sanctions on Russia as horror stories continue to flow out of Ukraine.

And financial pain for the Kremlin is seen by Kyiv as the best way of stopping the war by peaceful means.

But according to Russia’s readout of the Wang-Lavrov meeting, Beijing might be willing to bailout Moscow.

“The sides [China and Russia] noted the counterproductive nature of the illegal unilateral sanctions imposed on Russia by the United States and its satellites,” the Russian foreign ministry communiqué said.

No information has yet surfaced of hard Chinese military or financial support for Russia since the war began despite their diplomatic overtures.

They had plenty of work to do on repairing relations amid Chinese sanctions on EU officials and its trade bullying of Lithuania in a dispute over Taiwan.

But the war in Ukraine has made the atmosphere even more toxic, in what some EU diplomats see as an upcoming test of Michel and von der Leyen’s skills.

With Wednesday’s Chinese rhetoric, Beijing became an “open member” of an “axis of evil [with Russia],” Jakub Janda, the director of Prague-based think tank European Values, wrote on Twitter.

“China must be sanctioned hard until it stops supporting Russia,” he said.

EU states were expecting Michel and von der Leyen to let Xi know “there would be consequences for the EU-China relationship” if it financed or armed Russia at Friday’s summit, one EU diplomat, speaking anonymously, told EUobserver.

It’s “not often we have a chance to deliver a message directly to Xi, so let’s hope they [the top EU duo] are up to the task when faced with a real world leader,” the diplomat added.

The situation was “very sensitive”, but Michel and von der Leyen had “a chance” to show that the EU “could act as a global power”, Lithuanian liberal MEP Petras Austrevicius said.

China can’t expect EU trade perks while intimidating countries such as Lithuania and “joining a country [Russia] which is at war with our associated partner [Ukraine],” Austrevicius added.

EU states’ unity in trying to stop Russia was “unprecedented” and there would be “obvious expectations” for Michel and von der Leyen to take a strong line, the EU diplomat said.