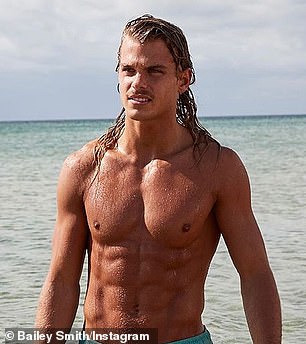 Bailey Smith is said to be supported by his girlfriend Gemma Dawkins after he was photographed holding a small bag containing an illicit substance.

Smith was also filmed snorting an unknown substance in a separate video.

According to the Herald Sun, Gemma supported her boyfriend amid the scandal.

In the footage, separate from the image of Bailey holding a bag of white powder, a woman says, “I need a straw.”

Moments later, he bends down, sniffs something, wipes his nose, then leans down again.

Smith admitted to “making mistakes” when the story broke on Saturday.

“We are extremely disappointed to have observed content on social media showing Bailey Smith with an illicit substance,” Western Bulldogs CEO Ameet Bains said in a statement on Saturday.

Meanwhile, Smith confirmed he was in a new relationship during an interview with Code in May.

In the chat, he said his “girlfriend’s” father had seen him star in shirtless adverts for fashion brand Cotton On, which are currently plastered on billboards across the country.

‘It’s funny. My girlfriend’s dad walks by every day,” he said.

“It’s hilarious… It’s interesting but I don’t pay too much attention to it. I try not to. I just focus on my football, because that’s what comes first, and all these other awards with Cotton On and Monster come after that.

“As long as I keep trying to perform and work hard during the week, all of this other fruit and exciting stuff happens.”

Later that month, the Herald Sun reported that he was “quietly” dating brunette Gemma Dawkins.

According to the Herald Sun, Gemma supported her boyfriend amid the scandal