In a newly-released video from Buckingham Palace, the monarch was introduced to Alcott over a call, which took place ahead of the Platinum Jubilee central weekend.

Alcott was the first to be introduced by Governor-General David Hurley.

“Hi, your Majesty, thanks for coming to chat to us, this is awesome,” Alcott began.

“My name’s Dylan Alcott and I still can’t believe it but I got named Australian of the Year for this year, which is just ridiculous. It’s such a huge honour.”

“I’m a proud Australian, I think you can see I’m in a wheelchair.”

Alcott told the Queen he has been in a wheelchair his whole life and he has achieved success in wheelchair tennis and wheelchair basketball.

“I was very lucky to win four Paralympic gold medals,” he said.

He then went on to say he “unfortunately, won a couple of Wimbledon titles, beat some Great Britain players, which I was happy about but maybe you weren’t so happy about.”

Alcott then told the monarch the reason he gets out of bed every day “is to change perceptions” so people living with disabilities can “get out and live the lives they deserve to live”.

In addition to the sportsman’s work as Australian of the Year, he runs the Dylan Alcott Foundation and shares the stories of people with disabilities on the podcast ListenABLE.

“I just want to use my platform to shine a light on that to help employment opportunities, help people get out there and live the lives that they want to live,” he said.

“To be given this honor to be Australian of the Year, I get emotional talking about it, to be honest.

“When I was a young kid I used to hate myself, your Majesty. 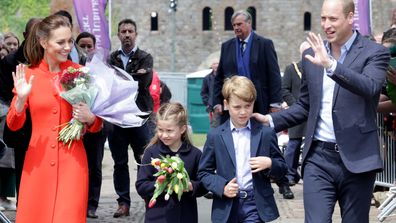 “If I thought anybody in a wheelchair, let alone myself, would be Australian of the Year, I wouldn’t have believed you. (It’s) an honour.”

Alcott said when he told his mother he had the opportunity to meet the Queen “she cried”.

“How cool’s that?” he said, a reaction which seemed to surprise the monarch.

“I think I’ve made her very proud as well. A real honor for me to be here today, thank you”.

The Queen then went on to clarify that Alcott had in fact retired from tennis, with his response getting another giggle from Her Majesty.

“I’m retired now,” he said. “I’m looking forward to coming to Wimbledon and actually drinking a Pimm’s this time, rather than playing the whole time, you know what I mean? It’s going to be fun.”

“I’ve had a great career but I think it’s time for me to do something else and use my platform to help more people.

“I’m really excited about the opportunity.”

The Queen asked Alcott more about his work improving the quality of life for Australians with disabilities.

“That’s wonderful to be helping other people. So that’s what we’ll be focusing on, is it?” the Queen said.

Alcott then told the Queen about his foundation which helps “young people with disability achieve their dreams”.

Alcott said this will be done through initiatives including university scholarships and funding startups, which he plans to soon take global.

“(We’re) really shining a light on some of the things that people with disability often haven’t had the opportunity to do through employment, mainstream schools (and) participation in sport,” he said.

“I’ve got to give you credit, the London Paralympics changed the game for so many people like me.

“It really was one of the best moments of my life playing there.

“And I think the rest of the world has followed suit now.”

During the call, Her Majesty also spoke to Dempsey, the recipient of the Senior Australian of the Year Award, who has spent over 50 years volunteering for St John Ambulance.

The Queen then heard from Dr Daniel Nour, who founded Street Side Medics in 2020 to provide medical services to people experiencing homelessness.

Ms Shanna Whan, who set up Sober in the Country to help isolated people overcome alcohol addiction, was also introduced to Her Majesty.

The virtual call allowed the Queen to connect with the Australians.

“Seeing (as) you’re unable to travel to Australia… we might be able to bring Australia to you,” Hurley said.

The Governor-General has this week made his way to London to take part in the central weekend of Jubilee celebrations.