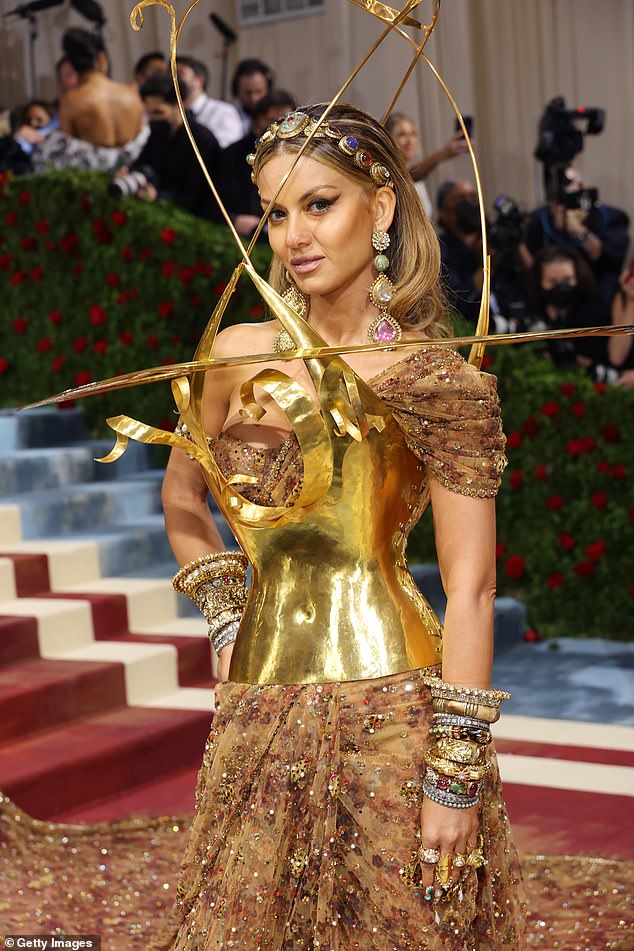 Natasha Poonawalla turned heads in an opulent all-gold ensemble – featuring a metallic corset with detailing that artfully circled above her head in a halo – at this year’s Met Gala in New York on Monday.

The businesswoman and socialite, 40, stayed true to the Gilded Glamor theme, styling her look with exuberant jewelry, including a chunky gemstone headband, heavy embellished earrings and clusters of decorative bracelets.

Her magnificent caramel-colored dress was finely beaded with sequins.

Head to toe: Natasha Poonawalla, 40, turned heads in an opulent all-gold ensemble at this year’s Met Gala in New York on Monday

All in gold: The 40-year-old businesswoman stayed true to the Gilded Glamor theme, styling her look with exuberant jewelry

It consisted of a rhinestone-embellished strapless bodice with a gorgeous bronze-colored shawl draped and wrapped around it, coming out in a flowing train behind the wealthy tycoon.

Thinking about every little detail, even Natasha’s fingernails were studded with gems and pearls as her highlighted honey blonde hair appeared golden when caught in the light.

Letting her loud ensemble do the talking, the socialite kept it simple with a dewy base, shimmery eyeshadow and smoky wing.

Dressed to new: the dress consisted of a strapless bodice adorned with rhinestones with a superb bronze-colored shawl draped and wrapped around

Stunning: Letting her loud ensemble do the talking, the socialite kept it simple with a dewy base, shimmery eyeshadow and smoky wing

Natasha is part of the wealthy Poonawalla family, which runs the world’s largest vaccine maker, The Serum Institute.

It was founded by his father-in-law Cyrus Poonawalla, 81, in 1966 and has partnered with vaccine developers including Novavax, Codagenix and AstraZeneca.

The family background was in racehorse breeding, and after a horse was bitten by a snake, the business was formed to allow them to do treatments themselves.

Gorgeous: Natasha was draped in golden tones as she posed up a storm at this year’s Met Gala

Details: Thinking about every little detail, even Natasha’s fingernails were studded with gems and pearls

Adorned: Natasha dazzled with stacks of rings and bracelets along her arms and hands, adding to the opulence of her ensemble

All that glitters: Natasha was a vision in her eye-catching ensemble, sticking to the Gilded Glamor theme

Cyrus is the Institute’s chairman, with an estimated net worth of $19billion (£15.1billion) – as reported in February – and has passed the baton to his son Adar Poonawalla, who acts as CEO. Last month, Cyrus’ net worth was reported at $26bn (£20.7bn) by some outlets.

Adar and his wife Natasha are based in Mayfair and Mumbai, along with some of his best friends from the highest strata of society: the Marchioness of Bath, Priyanka Chopra Jones and Bollywood actress Kareena Kapoor.

The family spend most of their time in their £50,000-a-week London flat, a Georgian townhouse in Mayfair and one of the area’s biggest properties.

Out of this world: Natasha’s corset had its own orbit as intricate details circled around her ensemble

Strike a pose: The businesswoman struck a confident pose as she attended this year’s Met Gala

The Met Gala is considered by many to be the “Super Bowl of celebrity red carpets”.

Fashion’s biggest night is traditionally held on the first Monday in May to raise money for the Costume Institute in New York, with last year’s event being moved to September due to the pandemic.

Vogue editor-in-chief Anna Wintour once again oversaw the benefit as chairwoman, a position she has held since 1995. Her fellow honorary co-chairs are designer Tom Ford and Instagram executive Adam Mosseri.

Friends in high places: Natasha, who spends her time between Mumbai and Mayfair (pictured with British Vogue editor Edward Enninful) is well connected