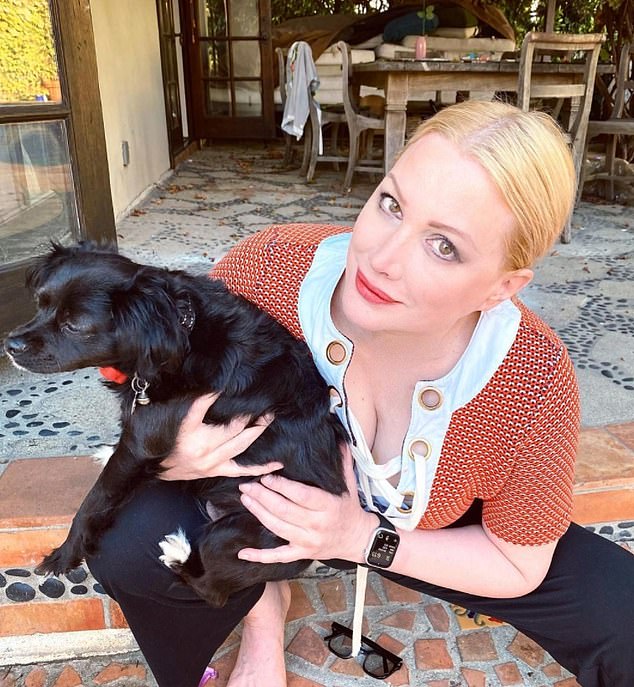 Alice Evans has spoken out about her debilitating 13 years living with fibromyalgia.

The actress, 53, shared an emotional Instagram post on Monday night as she revealed she spent years struggling to get out of bed, while today she is forced to ‘soldier on’ and live with the pain to take care of her two daughters.

Just hours after Alice shared her story, Bianca Wallace, 30, who is in a relationship with Alice’s ex husband Ioan Gruffudd, 48, posted her own update on chronic pain and living with MS.

‘I couldn’t get out of bed for years’: Alice Evans has spoken out about her deliberating and painful 13 years living with fibromyalgia

Alice shared a screenshot of a recent TSWT story on presenter Kirsty Young and her experience of fibromyalgia, praising the star for speaking out on the condition.

‘I am so proud of you Kirsty for coming back. I have this too. Who else does? There are so many of us living with it -usually scared to tell people because they do t understand and we don’t want to feel like we’re malingering,’ Alice wrote.

‘Kirsty is right – since doctors don’t really understand it they try all sorts of medications and there’s a point where we don’t know what causing the endless pain and glass joints, unbelievably painful muscles and inability to move.’

Chronic pain: The actress, 53, shared an emotional Instagram post on Monday night as she revealed she spent years struggling to get out of bed, while today she is forced to ‘soldier on’ and live with the pain to take care of her two daughters

Alice went on to add that after years of trying to cope with the pain with the help of medication, she no longer takes any drugs aside from ibuprofen.

‘I couldn’t get out of bed for years. I can now, but not for long. I no longer take any medication for it – Lyrica, Gabapentin, Plaquenil, Cymbalta ( that was the worst for me) Tramadol, Cyclobenzaprine only made me feel worse. Steroids were hell. They don’t seem to touch the pain with me and they make me crazy.’

‘I take ibroprofen even though it doesn’t do anything. Fibro is apparently not an inflammatory disease ( but who knows?) I only take it when I can’t cope with the pain anymore and I take it pretty much as a placebo.’

Health: Hours after Alice shared her story, Bianca Wallace, 30, who is in a relationship with Alice’s ex husband Ioan Gruffudd, posted her own update on chronic pain and living with MS

Living with MS: Bianca, who went public with actor Ioan in October 2021, shared an update on living with Multiple Sclerosis to mark World MS Day

‘Exercise DOES help, but I’m at the stage now where it also puts me in bed for three days and I can’t afford to do that with two kids. So I soldier on.’

Alice said that her two daughters Ella, 13, and Elsie, eight, ‘know I’m sick but they don’t really understand why there are days when I can take them places, and others where it hurts if they even touch me ( let alone jump on the bed!)’

The actress, who explained that she was diagnosed with fibromyalgia three months after the birth of Ella, ended her post by thanking other stars for using their platform to speak about the condition and pleading for more funding and research.

Diagnosed three years ago: Alongside the lengthy caption, Bianca shared excerpts from her symptoms diaries, which showed her crying on camera as she described her pain levels

Tough: Alice previously revealed how she ‘altruistically’ allowed her ex Ioan to continue working during their 14 year marriage, while staying at home with the girls, despite battling chronic pain

Hours after Alice posted her message, Bianca, who went public with Ioan in October 2021, shared an update on living with Multiple Sclerosis to mark World MS Day.

‘I am going to be as real and vulnerable as it gets… I want to show you what really happens,’ she wrote.

‘Between July 2018 to October 2019, before I found a treatment that helped me, was a truly terrible time of my life spent almost entirely in bed & MRI machines. My memory and cognition were affected by MS almost immediately. It all happened so hard and fast having 10 attacks in the first year and three months.’

Moving on: Earlier this month Bianca spoke highly of Ioan and how he has handled her diagnosis as they attended an MS fundraiser in London together

‘I struggled with keeping my neurologist up to date because of the memory issues, so he suggested I begin a video journal… For the sake of awareness, today I will share a few short extracts from some of these videos over the years (as well as some photos!).’

‘I learned to accept that my life is not easy, that I will have a lot of physical issues, that not everyone has a good heart, and that my future will always be unsteady with a giant question mark that hangs quite heavily over my head…’

Bianca, who was diagnosed with the chronic inflammatory disease of the central nervous system three years ago, continued: ‘It took having my a** handed to me by an illness that I had no way of controlling for me to truly understand what life is all about. I don’t care how corny it sounds – I will never not be grateful for what it has taught me, not only about life, but about who I really am at my core. It’s remarkable what a diagnosis can do for a soul!’

Split: Ioan filed for divorce from Alice in March 2021, citing irreconcilable differences as the reason behind their split (pictured in January 2020)

Fibromyalgia is a chronic condition defined by widespread pain and fatigue.

It affects up to 2.7 per cent of people worldwide, with three women suffering for every one man, studies suggest.

Fibromyalgia is often triggered by a trauma, such as a car accident or childbirth, as well as infections. Why this occurs is unclear.

The discomfort tends to be felt as aches and burning from head-to-toe.

And the fatigue ranges from feeling sleepy to the exhaustion of having the flu.

Severe sufferers are often unable to work or socialise.

The pain can be worse at some times than others and may change location, such as becoming more severe in parts of the body that are used the most.

Other symptoms can include headaches; IBS; diarrhoea or constipation; poor concentration; dizziness; allergies and stimuli sensitivity, such as to light or heat.

Studies suggest the average patient waits five years to be diagnosed, which is thought to be due to X-rays and other medical tests not picking the condition up.

It is generally defined as pain that lasts for more than three months and affects 11 or more out of 18 tender points when pressed.

‘It is a harder life, but what it changed in me and for me has made it all worth every second of difficulty that I experience!’

She ended her emotive post with the declaration: ‘Follow your heart because life is terribly short and unpredictable and real, genuine regret is a hell of an experience to overcome…’

Alongside the lengthy caption, Bianca shared excerpts from her symptom diaries, which showed her crying on camera as she described her pain levels.

Earlier this month Bianca spoke highly of Ioan and how he has handled her diagnosis.

She said: ‘Look it’s not an easy illness. I’m more proud of the partners, I feel more sorry to the partners of people with MS because for us you have to face it, you genuinely don’t know what it’s going to be like’.

‘But when you’ve got an amazing support system, everything’s different everything changes’

‘I feel very lucky to be with someone so supportive. It’s amazing, I haven’t had this before. To have someone who is understanding is incredible’

Ioan, who spoke alongside Bianca at a fundraiser for MS in London, added: ‘I think it’s a matter of being continuously aware, being generous, being kind, being patient and understanding

Alice previously revealed how she ‘altruistically’ allowed her ex Ioan to continue working during their 14 year marriage, while staying at home with the girls, despite battling chronic pain.

Responding to a Twitter follower, on her since deleted account, who claimed it was her choice to become a stay at home mother and allow Ioan to work, she said:

‘It was hard. Really hard. I felt I was doing my bit for the family… every time I came to near breaking I told myself I would get back out there once they were older and that at least my husband was getting the opportunity to do the stuff he wanted…

‘Rather than the stuff which shoots here, which is very limited. everything I did was altruistic… It was so freaking hard during the early years…

‘I have fibromyalgia so sometimes it was hard to move or get out of bed. But I brought the girls on planes to wherever he was and TRIED to do the occasional guest spot. I felt a bit sad when I saw my friends doing amazing’.

Family: Alice applied for legal and physical custody of her children. In court documents obtained by People , the actress asked that visitation rights be granted to Ioan (pictured with Ella and Elsie in 2018)

Ioan filed for divorce from Alice in March 2021, citing irreconcilable differences as the reason behind their split.

The document, which was filed in Los Angeles Superior Court on March 1, revealed the former couple separated on New Year’s Day – a month before they went public with their relationship status.

Alice applied for legal and physical custody of her children. In court documents obtained by People, the actress asked that visitation rights be granted to Ioan.

She also requested ‘spousal support, termination of the court’s ability to award spousal support to Gruffudd, and for her attorney fees to be paid by her estranged husband’, while citing ‘irreconcilable differences’ as the reason for their split.

In October the actor went Instagram official with Bianca, Alice said at the time that she was was ‘heartbroken’ and felt ‘dead’.

In February 2022 Ioan applied for a restraining order against his ex and submitted 113 pages of abusive text messages, emails and social media posts as evidence.

Alice returned to Instagram last week after appearing to delete her account days after sharing that she was suffering from ‘nose bleeds and vomiting’ following a positive Covid test.

Earlier this year the star also dramatically deleted her Twitter account after slamming Bianca over a perceived ‘lack of empathy’.

WHAT IS MULTIPLE SCLEROSIS?

Multiple sclerosis (known as MS) is a condition in which the immune system attacks the body and causes nerve damage to the brain and spinal cord.

It is an incurable, lifelong condition. Symptoms can be mild in some, and in others more extreme causing severe disability.

It is more than twice as common in women as it is in men. A person is usually diagnosed in their 20s and 30s.

The condition is more commonly diagnosed in people of European ancestry.

The cause isn’t clear. There may be genes associated with it, but it is not directly hereditary. Smoking and low vitamin D levels are also linked to MS.

The majority of sufferers will have episodes of symptoms which go away and come back, while some have ones which get gradually worse over time.

Symptoms can be managed with medication and therapy.

The condition shortens the average life expectancy by around five to 10 years.