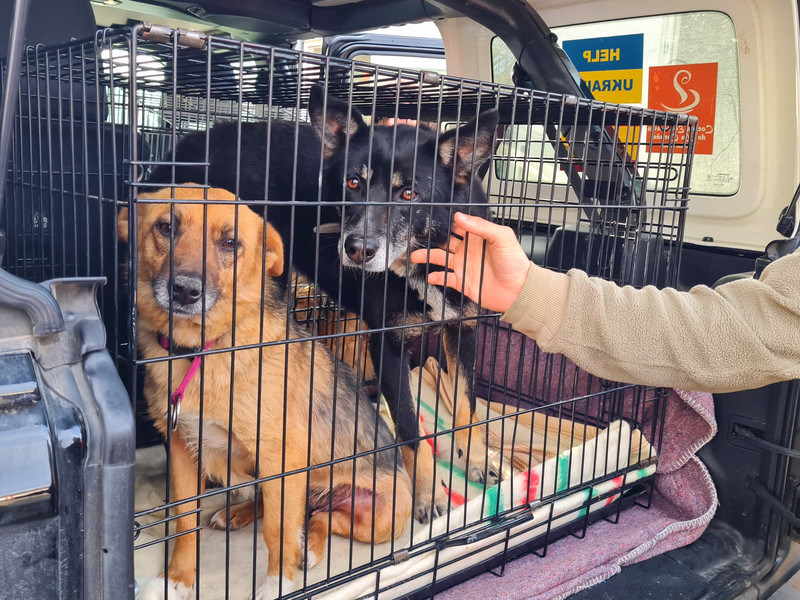 Mariana Leonov, a Ukrainian refugee from Kharkiv, drove into the animal rescue facility near a derelict barn on the Polish side of the border with Ukraine.

In the back of the vehicle were four small dogs, rescued from a bombed out shelter in Borodyanka on the outskirts of Kyiv.

The Borodyanka shelter had been abandoned during Russian shelling, leaving the animals to starve.

Several hundred had died, others were emaciated and too weak to move. Graphic images circulating online showed some of the dogs, trapped three to four to a cage, mauled to death.

When Leonov had herself fled Kharkiv weeks ago, she had taken her cat and moved to Lviv, a safer Ukrainian city in the west.

“It was difficult, it was dangerous, it was scary,” said Leonov of the drive from Kharkiv.

For many Ukrainians, pets are seen as a part of the family. Refugees from Ukraine are allowed to take up to five with them when they flee, with Polish and other EU border guards waiving the usual restrictions.

This includes derogations on chip identification, valid rabies vaccination, titration results for antibodies against rabies, and a health certificates issued by a vet.

Border guards will instead have them fill out a paper, demanding the refugees follow proper protocols once settled elsewhere. There is no follow-up, posing risks of possible rabies outbreaks later on.

But for animals that have been left stranded in shelters and others abandoned by their owners, the issue of rescue has become increasingly complex.

So when Leonov and her Spanish friend unloaded the four Borodyanka dogs, Malik Przemysław, the coordinator at the animal rescue shelter, rushed to greet her.

Przemysław, along with volunteers, had set up the animal rescue shelter near Medyka, a border crossing point for thousands of refugees seeking safety in Poland.

The shelter is part of the Centaurus Fundacja, a large Polish advocacy group that helps rescue sheltered and abandoned animals from war zones in Ukraine.

The shelter overseen by Przemysław ensures the animals are properly vaccinated, tagged, and then placed into quarantine for evaluation.

It can hold up to 150 animals. Some are moved on to a larger facility at Szczedrzykowice, a rural town nearby.

Once cleared, they are then put up for adoption.

On the day of this reporter’s visit, Przemysław’s facility had only 12, plus the four additional arrivals from Borodyanka.

“We save dogs from shelters that are really crying for help,” said Przemysław, noting some dogs with collars are still roaming around the streets of Bucha.

Around 750 animals from all around Ukraine have already passed through Centaurus facilities so far, he said.

Border authorities will waive refugees with pets through. But animals, such as those rescued from shelters, with no personal owners are stopped and often find themselves stranded on the Ukrainian side.

Przemysław says the main problem is that the municipal vet is afraid of a rabies outbreak, forcing people to carry out the necessary medical procedures in Ukraine.

That in itself poses additional problems given the war and lack of facilities in Ukraine.

He also says any such outbreak from their shelters in Poland is unlikely since the animals are properly chipped, vaccinated, and quarantined by professional veterinarians.

“We can do it up to scratch here in Poland, don’t make us do it in Ukraine, Ukraine is at war. Here it is safe,” he said.