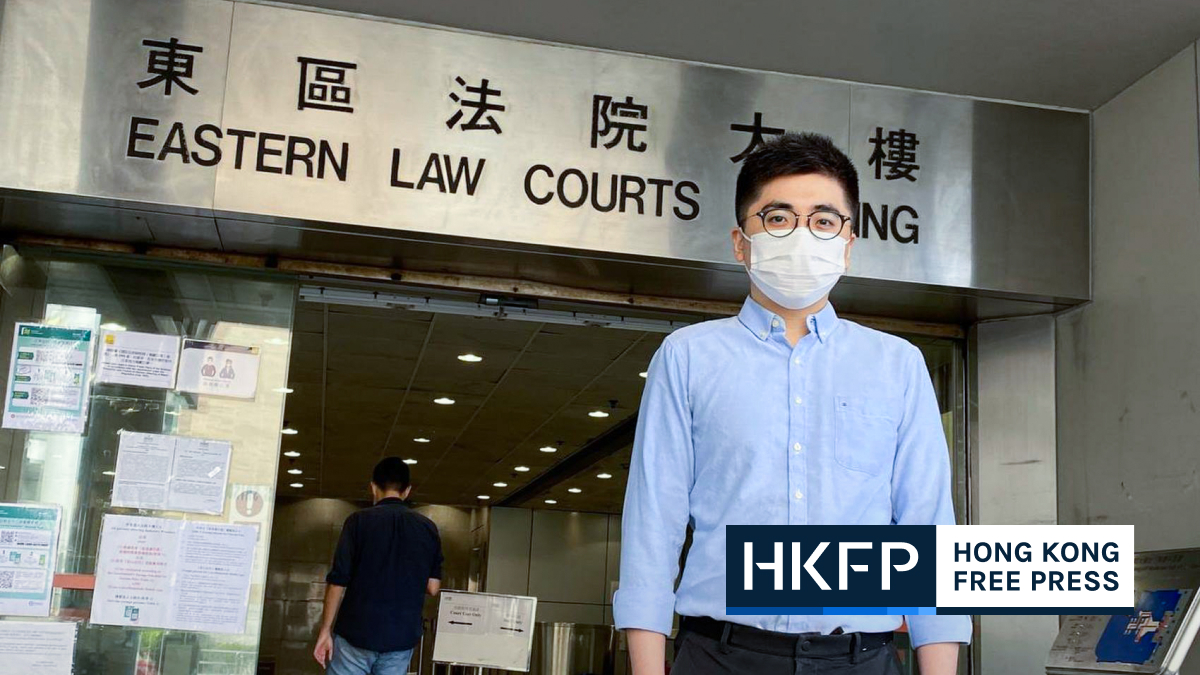 Former teacher Raymond Yeung, who was left partially blind after being stuck by a police projectile during a protest in 2019, has been sentenced to nine months in jail after pleading guilty to two illegal assembly charges.

Yeung, 32, appeared in front of Principal Magistrate Ada Yim at the Eastern Magistrates’ Courts on Monday. Yeung was not given any discount to his sentence as a result of his injury, as Yim said the police had given protesters repeated warnings.

In video footage, Yeung was seen standing with other protestors outside the Central Government Complex in Admiralty on June 12, 2019, wearing a black T-shirt and later a yellow helmet. That day was widely seen as the beginning of the months-long protests against a proposed amendment to the city’s extradition bill, which would have allowed fugitives to be extradited to mainland China.

According to the case details read out in court, he was sent to the Queen Elizabeth Hospital after being hit by a police projectile at 4:25 p.m. Yeung declined to tell a police officer at the hospital how he had been injured, but the officer recognised him from an online video taken at the protest and he was arrested on suspicion of rioting.

In the video, Yeung can be seen with blood pouring from his eye. Speaking to the camera, he said that he was facing the police on the front line when what he thought was a rubber bullet hit his right eye. He said the police had not raised the flag to warn that they would start shooting.

He was rearrested in April and was charged with taking part in illegal assemblies in 2019.

Yeung’s lawyer told the court that Yeung had already suffered the consequences of what he described as “stupid misjudgement,” as he has been doxxed and forced to move after becoming known as the “teacher who got shot in the eye.” Yeung lost his job as a Liberal Studies teacher at an elite girls’ school and his eyesight has never fully recovered.

The former educator founded a publishing company called Hillway Culture, his lawyer said, and has been trying hard to start a new life. Yeung also pleaded guilty in the earliest stage possible.

Yim said that when it came to sentencing, she would not take Yeung’s injury into consideration for a deduction, as the police warned protestors of the consequences of their actions through loud speakers and by raising warning flags. She said “it was regretful” that anyone was injured, but “it was impossible for the police to do nothing, or the situation would have been worse.”

However, Yim told Yeung that she recognised his efforts over the past three years in trying to start afresh in the publishing sector. The magistrate sentenced to Yeung to nine months and 15 months in prison for each offence. Yeung was eventually sentenced to nine months in prison after Yim applied a deduction and ruled that the two jail terms were to be served concurrently.

As he was escorted away after sentencing, his former students and friends sitting in the public gallery shouted “see you later.”

Yeung was was among those who won a legal challenge in 2020 against the police relating to the use of officer identification at protests.

He founded Hillway Culture in 2016, which has become known for publishing protest-related and politically sensitive books in Hong Kong. Hillway Culture was rejected from taking part in the government-supported Hong Kong Book Fair held in July.