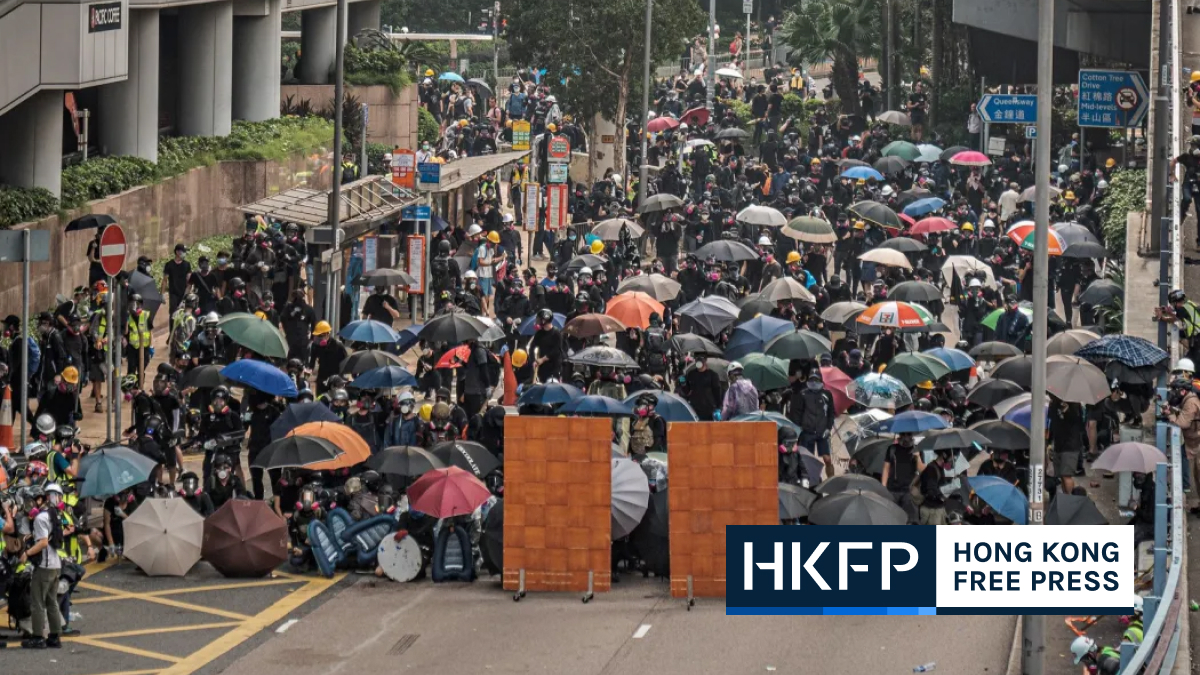 A Hong Kong court has jailed nine protesters – including a 24-year-old pregnant woman – for three years and six months each after they were convicted of rioting outside the government headquarters at Admiralty in 2019.

Two other defendants, Lam Cheuk-hin and Ivan Leung – now aged 19 and 20 – were both sentenced to a training centre. Training centres, where the minimum sentence is six months and the maximum is three years, provide an alternative to prison for some offenders aged under 21.

Only nine defendants appeared in front of Frankie Yiu at District Court on Friday morning. Cheung Ming-yin and Tse Tsz-kin were absent because of quarantine arrangements.

Yiu said on Friday that he had tried his best to minimise their jail terms, as mitigation letters had shown how supportive the defendants’ families and friends were. He encouraged the defendants to “not give up on yourself” and “give back to the society” after finishing their time in prison.

Among the defendants, Li Wing-yan, who was 21 at the time of the event, is pregnant and expecting to go into labour in jail. Her lawyer said that Li has been suffering from post-traumatic stress disorder since the 2019 protests and had considered having an abortion.

However, after discussing matters with her family and her husband, Li decided to give birth to her daughter in prison, her lawyer said, adding that they hoped the court would take her situation into consideration when handling her sentence.

Yiu said that there was no evidence to suggest that the defendants had made meticulous plans to riot, that they had directly assaulted anyone, or had acted as leaders on the day.

However, Yiu said that none of them had been “onlookers” at the scene, as they had chanted and showed support to the protesters, even though it was possible they had been influenced by the atmosphere. “The event was large-scale, yet it only lasted for 20 minutes,” Yiu said, “and that is solely because of police intervention.”

Yiu said the starting point of the sentence should be four to five years, but after taking into account the role of the defendants in the event and the impact of undergoing a three-year-long legal procedure, he decided to reduce the sentence to three and a half years.

On the day in question, chaos erupted on Hong Kong Island as protesters staged an unauthorised “global anti-authoritarianism march” that coincided with rallies held in more than 40 countries. Police deployed water cannon, tear gas and pepper spray to crack down on demonstrators who hurled bricks and petrol bombs. Protesters also set fire to makeshift barricades and vandalised MTR exits.

Protests erupted in June 2019 over a since-axed extradition bill. They escalated into sometimes violent displays of dissent against police behaviour, amid calls for democracy and anger over Beijing’s encroachment. Demonstrators demanded an independent probe into the police conduct, amnesty for those arrested and a halt to the characterisation of protests as “riots.”