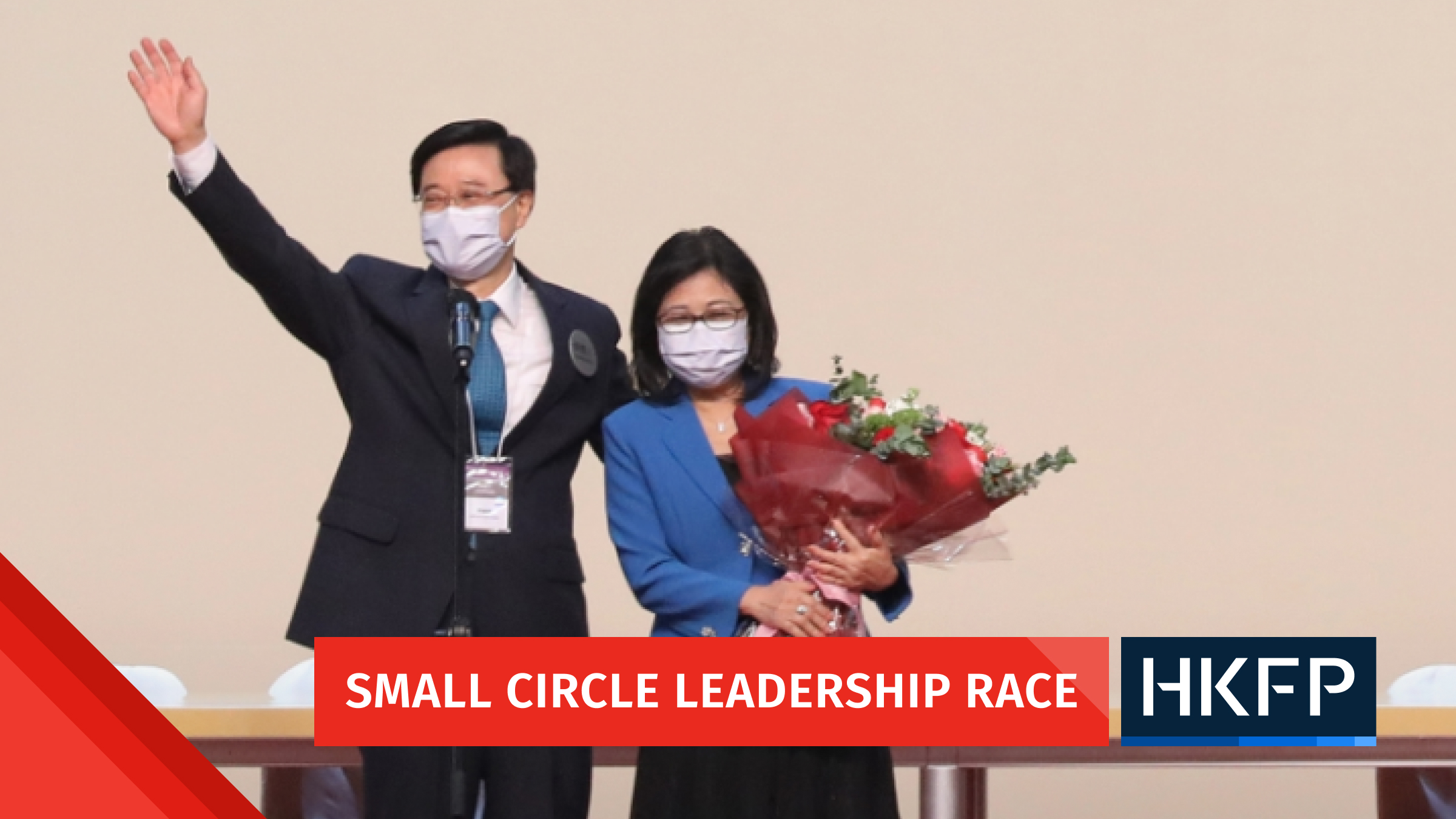 Sole chief executive race candidate John Lee has been selected to become Hong Kong’s next leader. The 64-year-old ex-police officer and chief secretary will take the reins on July 1.

Lee received 1,416 votes in support and eight “not support” votes from the newly-revamped Election Committee.

The committee – who were vetted by Lee himself last year – gathered on Sunday to cast their ballots in the small-circle race at Wan Chai’s Convention and Exhibition Centre. 1,428 members of the 1,461-strong committee had cast a ballot by the time polls closed at 11:30a.m. – representing a turnout rate of 97.74 per cent.

Lee will be sworn in on the 25th anniversary of the city’s return to China, a day after incumbent Chief Executive Carrie Lam completes her term. Sunday’s event – during which 7,000 police officers were reportedly deployed – was originally scheduled for March 27, but it was postponed owing to the Omicron crisis.

In his victory speech, Lee – holding a bouquet of flowers – thanked those who had turned up and the Hongkongers who were watching live on TV. “I am very thankful to every person who has supported and encouraged me,” he said. “Today is the chief executive election day, which is important to me. But it’s also Mother’s Day, Buddha’s Birthday, and the Red Cross’s World Smile Day.”

He then invited his wife on stage and presented her with flowers, wishing her a happy Mother’s Day.

In 2017, Lam’s swearing in was overseen by Chinese leader Xi Jinping. Local media have hinted that Xi will visit Hong Kong to install Lee as the next chief executive, though on Tuesday his campaign manager Tam Yiu-chung said only that he “hopes” Xi will make the trip.

Lee ran on a platform of leading Hong Kong with a “results-oriented approach,” pledging to alleviate Hong Kong’s long-standing housing shortage and raise the city’s competitiveness as an international business hub. His brief manifesto – which was only published last Friday – did not offer concrete plans on how he would achieve his aims.

He arrived in Wan Chai at around 9 a.m. and greeted Election Committee members with an elbow bump.

After his victory was announced, incumbent leader Lam released a statement of support: “I extend my sincere congratulations to Mr John Lee on his successful election and later today, I will submit a report of the election result to the Central People’s Government. The present-term government and I will ensure a seamless transition with the Chief Executive-elect. We will render all the support needed for the assumption of office by the new term of government.”

Lee, who oversaw the police force’s response to the 2019 protests as security secretary, will be the first former police officer from the security branch to rise to the top job in post-colonial Hong Kong.

The small-circle chief executive election is the first since the central government ordered an electoral overhaul – encompassing the top leadership race and the Legislative Council vote – to ensure only those showing patriotism to Hong Kong and China could run. Under the changes, chief executive hopefuls must be verified by the Candidate Eligibility Review Committee, which was helmed by Lee as the chief secretary.

The overhaul saw the representation of traditionally pro-democracy sectors – such as education, I.T. and the legal sector – reduced, whilst district councillors – almost exclusively pro-democracy – were excluded entirely. Most opposition figures remain behind bars, in self-exile abroad, or have quit politics following the onset of the national security law.

The government says the elite voters are “broadly representative” and will ensure the city’s stability and prosperity, though they make up only 0.02 per cent of the population.

Allan Zeman, among the members with a vote in the small-circle election, told HKFP that sole chief executive candidate John Lee has done a “pretty good job” campaigning and made attempts to engage the public.

He defended criticism that the one-horse race was predetermined.

“The reason there’s just a single candidate… is only because of the virus,” Zeman said, adding that he believed there would have been more than one contender, and election activities with the public invited, if not for Covid-19.

Arriving at the Convention and Exhibition Centre, Basic Law Committee vice-chair Maria Tam – who also sits on the Election Committee – said Lee has served Hong Kong for around 40 years and that the public know him well. “I think the election will go relatively smoothly,” she added.

Self-proclaimed non-pro-establishment lawmaker Tik Chi-yuen, who announced in a statement on Saturday that he would be casting a vote of support for Lee, said that there was “a distance” between the content of Lee’s political manifesto and Tik’s expectations.

“But even though some of our views are different, [my party and I] hope we can work together towards Hong Kong’s development,” he told reporters.

Ahead of polls opening, pro-democracy group League of Social Democrats (LSD) held a brief three-person demonstration at around 8 a.m. along a bridge to the Convention and Exhibition Centre.

The LSD said more than 4.47 million voters in Hong Kong were “deprived” of their right to choose the city’s leader, while Lee’s candidacy was described as “perfectly demonstrating the Chinese-style single-candidate election.”

Lee had a limited electoral base, the LSD said, adding that the demands and aspirations of most Hongkongers were “completely ignored and oppressed” under the electoral system that was revamped last May to ensure only “patriots” hold power in the city.

At a closed-door rally on Friday at the Convention and Exhibition Centre, supporters – including former police commissioner Tang King-shing and ex-chief executive Leung Chun-ying took to the stage to speak positively of the hopeful.

See also: How almost everyone running for Hong Kong’s new election committee will get a seat automatically

During his speech, Lee reiterated points in his political manifesto and said he would “start a new chapter” with Hongkongers. “In the five years ahead of us, I and everyone will build a Hong Kong that is caring and inclusive, and full of hope and vitality,” he said.